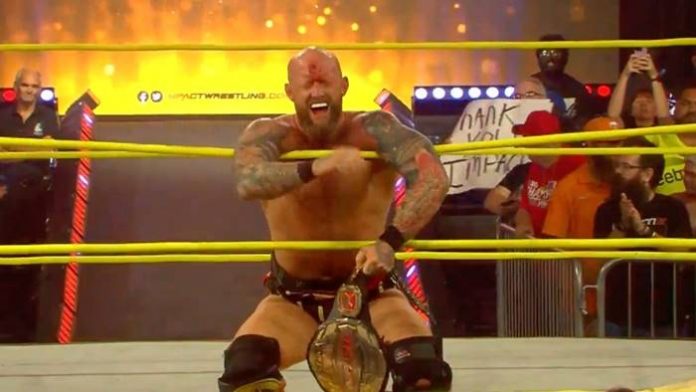 Coming off the heels of Slammiversary, Josh Alexander successfully defended his Impact World Championship against Eric Young. In the match, we saw an incredible display of wrestling between the two men, that gave a nod to the older TNA/Impact days. After Alexander’s title defense, one question remains, who is next?

In 2020, Austin became the new number one contender for the Impact World Championship by defeating Rhino, Hernandez, and Zachary Wentz. Austin wouldn’t go on to win the championship, however.

Number two on this list is Sami Callihan. On Sunday’s Slammiversary show, Callihan would go on to defeat Moose in a “Monster’s Ball” match. This match ultimately put an end to the rivalry between Moose and Callihan. Callihan could be next in line for a match with Alexander.

He would go on to have a respectable reign, holding the Impact World Championship for four months. Ultimately, Callihan would drop the belt to Tessa Blanchard at Hard To Kill in January of 2021.

In September of 2021, Callihan would suffer a broken ankle. He recently made his return, taking out Moose in the process. With his rivalry with Moose most likely coming to an end, Callihan could be next in line to become an Impact World Champion again. His first reign, while it was short, showed only a glimpse of how good he is.

This last name is a bit of a dark horse. This past Sunday, Sabin took place in the five-on-five match, between the Impact Originals and Honor No More. Sabin would end up hitting the cradle shock on PCO for the three-count to win the match for his respective team.

Following Slammiversary, Sabin could easily be thrown in the Impact World Championship picture. He has all the credentials to be in the conversation, and is arguably one of the best wrestlers to ever come out of TNA/Impact Wrestling.

Over the course of his career in TNA/Impact Wrestling, Sabin has won the TNA World Heavyweight Championship once, the World Tag Team Championships twice, with Alex Shelley, and has been X-Division Champion a total of eight times. Sabin is also the sixth ever TNA Triple Crown Champion.