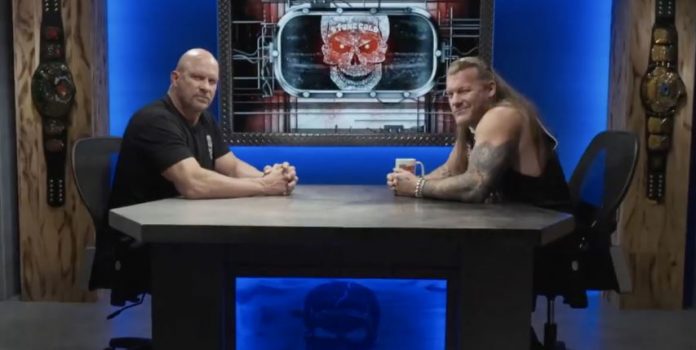 Chris Jericho has done it again.

Even as I’ve seen the confirmation on Twitter, I’m still stunned as I type this, former WWE champion and current AEW star, Chris Jericho will be a guest on Steve Austin’s Broken Skull Sessions April 11th on the WWE Network after the second night of Wrestlemania 37. How this is possible or why Vince McMahon, the kingpin of sports entertainment, allowed this to happen is a mystery, but it’s undoubtedly an unprecedented scenario, as in years past, the WWE rarely acknowledged its competition.

Hell Yeah!!! RT @WWENetwork: No foolin' around here. You're gonna get … IT! 🤯 @IAmJericho joins @steveaustinBSR on the next #BrokenSkullSessions, premiering Sunday, April 11 on @PeacockTV in the U.S. and @WWENetwork everywhere else! pic.twitter.com/7zgXVvLOte


One thing is for sure, this is another example of why Chris Jericho is in a league of his own.

Jericho, a thirty-year pro, has a well-documented track record of reinventing himself during his two decades under the WWE banner so let’s focus on his post-WWE run, and more specifically why he remained relevant throughout such an extensive career.

Most importantly, Y2J knew never to rest of his accomplishments because that’s how a performer becomes typecast in a specific role, and in some cases, it works for them, but prehaps the biggest reason Jericho remains a part of the contemporary sports entertainment conversation is, he always has a progressive trend in his career. This isn’t meant as a knock, but just a comparison, Sting finally debuted in WWE in 2014 and late last year made a shocking return to TNT for AEW. Considering Sting’s age, the circumstances around the latter stage of his career, and his style, he just has to play the greatest hits so to speak for his appearances to be successful, and there’s nothing wrong with that. However, Sting wasn’t really looking to change anything late in his career and it wouldn’t have fit him anyway. On the flip side, Jericho’s transitions to different phases throughout his career is more natural because he hasn’t let himself settle into a pattern.

Make no mistake about it, Jericho could’ve used the paint-by-numbers approached and cashed-in on his WWE legacy for the easy money from Vince McMahon until he retired. Instead, he tested the waters and made bigger money because of it, but the point being, you can clearly see that he has the motivation to continue to add new chapters to his career as opposed to trying to coast on his past accomplishments.

Granted, some will criticize his recent work in AEW, but nobody can question the work ethic when he continues to look to break new ground after he already reached legend status, something that very few in the industry have done. Sure, there are many great legends in the business, but many of them rely on the work done in their prime to cover the second half of their career. Greg Valentine doesn’t work the county fair because those in attendance are expecting to see a classic match from “The Hammer” in 2021.

Aside from the easy money to be made with leaning on a legacy, it’s also a risk when big stars look to reinvent themselves because if it falls flat, it sends that message that their better days are behind them. Obviously, Jericho isn’t going to attempt those 1997 high spots today, but the bottom line is, he can still go in the ring, and is definitely a more complete performer now than he was at a time when his in-ring work was his most notable skills.

Aside from the previously mentioned progressive approach to his career and the work ethic to make the most of whatever he’s involved with, Jericho goes the extra mile to make his spots stand out. It’s often said that professional wrestling is about the moments, and Jericho makes sure to create those moments. For example, when he attacked Kenny Omega to step up the match at the Tokyo Dome that ultimately influenced the formation of All Elite, Jericho could’ve taken the easy road and filmed a video in his house. New Japan would’ve been happy with that because the bigger point was to get Jericho in the ring at the Tokyo Dome, where he was used as a primary selling point. Instead, Jericho took the 15-hour plane trip to be there live in Japan and it made the entire angle that much more impactful. Along with that, his portray of “The Pain Maker” gave something fresh for the New Japan stint. Again, Jericho wasn’t content to lean on his WWE fame just for the big Japanese payday.

As far as AEW, the Inner Circle has been very successful because it gave Jericho a stable, something new for his career, but also a way to maximize his star power, and it helped put a spotlight on younger talent that had to be presented as stars to help get the AEW project of the ground. As I’ve written before, considering his popularity because of his extensive resume, it made sense for the baby face turn recently in All Elite, mostly because Jericho already had the heel run at the launch of the promotion so a “good guy” run is a fresh aspect to his AEW tenure.

The question that everyone will ask is, why did Vince McMahon allow this?

It could be as mundane as Vince respects Jericho and doesn’t mind giving him the publicity of an appearance on Broken Skull Sessions, a series that has garnered rave reviews since it started last year. Another possibility is that even Vince McMahon knows that competition is good for the industry and doesn’t mind some subtle press for AEW because he knows the prospects of All Elite today could eventually be the stars of WWE in the future. As much as Vince is a pure businessman and understandably protects his empire, even he knows that trying to stomp on every platform would hinder the development and discovery of talent. How many ECW guys went on to have notable runs in WWF? How many TNA guys are stars for the WWE today? One of the major reasons that AJ Styles’ debut at the Royal Rumble was such major news was because of his work in TNA. I doubt this is the actual reason, but another possibility is that Vince could use this as a chance to indirectly show his dominance because it might be a way to show the industry that he can give his competition exposure of his network and his company can still maintain its dominance.

Regardless of the reason, this is uncharted water for the sports entertainment industry, and it’s yet another example of why the existence of All Elite Wrestling is important for the entire business. WWE is the king of sports entertainment, but options help fuel the genre. As I’ve said before, AEW defeating Raw in the ratings shouldn’t be the goal, but rather profitability is the true measure of success from a business perspective. The TNT extension made All Elite a profitable venture so it’s already a successful project, but the working agreements with other groups is something that tries to bring the best product possible to the audience.

In many ways, if something this surprising happens, it makes sense that Chris Jericho would be the one to appear on the WWE Network while under contract to AEW since it fits his narrative as a performer in a league of his own with such a unique career.