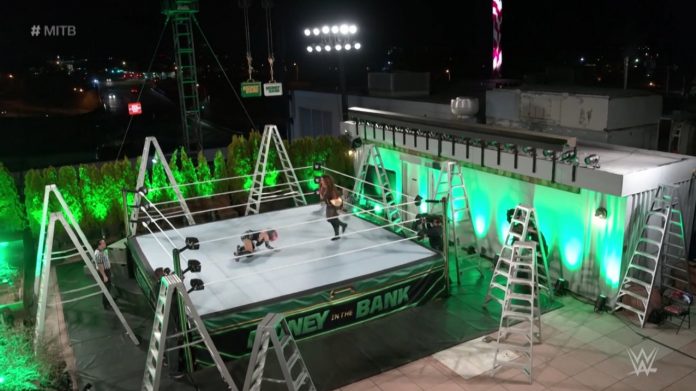 When the corona virus pandemic stopped the flow of the entire world, including the shutdown of every major sports league, Vince McMahon was determined to stage his signature event, Wrestlemania. As you may have seen, I have written a series of articles to review the trademark event with the benefit of hindsight and historical context. Even a global shutdown wasn’t going to prevent the baron of sports entertainment the chance to present his annual spectacular, even if the circumstances were anything but a spectacle. Obviously, matches worked in front of no audience led to a rather flat broadcast that was really Wrestlemania only in name. With so many obstacles for a live in-ring presentation, the show used “cimematic wrestling” elements to attempt to provide some type of variety on the pay-per-view. I will discuss why I completely disagree with this approach shortly, but it should be noted that the boneyard match from night one and the firefly fun house from night two were staples of the overall WM 36 presentation.

With the world still shutdown, the Money in The Bank pay-per-view aired a combination of live matches from the WWE performance center, where WWE TV has been filmed the past few months, and a taped segment from the WWE headquarters in Stanford, CT. The premise of the MITB matches was that the wrestlers would have to fight to the roof of the building, where a ring was set up with the briefcase and secure it to win the usual contract for a title shot. Again, WWE brass took the cinematic approach and it displayed everything that is flawed about the concept.

First of all, the entire point of professional wrestling is that it’s a reality-based competition, which is exactly why much of the measure of success of an angle is reflected in the heat it gets because ultimately, the heat is where the money is. There are good guys and villains in real life. The way to get an audience to invest their money into tickets and pay-per-views is to be able to get them emotional invested in the characters. Theoretically, the live audience could help rally their favorite star to a victory against the dastardly heel with their cheers of encouragement. The heat that the heel gets is the reason that the crowd has to cheer for the baby face. If there’s no heat then the hero isn’t in jeopardy, therefore he doesn’t necessarily need the assistance from the audience to cheer him on to get the win. I understand that this probably sounds too basic, but the point I’m trying to make is that there was a point in time that the potential reality of a pro wrestling scenario was the draw for fans, and quite frankly that remains the same today, even if there was a shift in the dynamic about the perception of how much of the industry is purely entertainment. The examples throughout history are numerous, even if the peek behind the curtain is occasional incorporated in the narrative. Bruno Sammartino was a real-life superhero for a few generations of fans as he battled foreign villains based on the events of the WWII era. The narrative evolved when Hulk Hogan squared off with Roddy Piper because the vicious heel antagonized the audience that followed Hogan. Stone Cold Steve Austin became the biggest star in the history of the sport because he was rebelling against his boss, at a time when it was well-known that professional wrestling wasn’t a legitimate competition. The point is, even the most jaded fans didn’t know if Vince McMahon was actually a tyrant of sports entertainment because of the infamous Montreal incident so perhaps Vince was getting what he deserved in some fashion when Stone Cold stunned him on a regular basis during the Attitude era.

The biggest key even in the modern era isn’t getting the fans to believe everything they watch on a wrestling show is legitimate, but rather the ability to keep them guessing about what or who is based on reality. For example, is Brock Lesnar really an anti-social person that wanted to exploit sports entertainment to make top money? Is MJF really as rude as he appears to be on TV?

The entire structure of “cinematic wrestling” goes against the fundamentals of what draws money in the business. Using the MITB match as an example, the unexplained background music that randomly started and stopped at different points is so hokey that it lets the audience know that there’s no reason to be emotionally invested because it’s all phony anyway. The sound effects are lame and cringe worthy. I know the counter argument to this is that these elements are used in movies all the time, but that’s the biggest difference in the entire scenario. Sports entertainment isn’t a movie and pro wrestlers aren’t actors. First of all, the role of an actor in a movie or on a television series is cast for a specific amount of time and when the film or show concludes, the actor that portrayed the role can get a completely fresh start with a new project. Plus, when Al Pacino goes on a television show to promote a film, nobody is expecting to talk to Michael Corleone. On the flip side, the role of sports entertainers is a continuous body of work that evolves over time, which makes how their characters are booked extremely important. Furthermore, because the draw of professional wrestling is based on the fans’ investment into a character, when Roman Reigns does an autograph signing, those in attendance wouldn’t have a response to a Joe Anoaʻi signature because the role of a professional wrestler extends beyond just their time on-screen.

Granted, the over-the-top aspect of cinematic wrestling isn’t my cup of tea because I think it’s too ridiculous and too far outside of usual parameters of professional wrestling to actually be considered professional wrestling, but if it draws then nearly everything else is irrelevant. However, if you look at any of the past examples of anything that goofy or something that was intended to be some type of lame comedy, there’s a track record that shows “movie wrestling” so to speak doesn’t draw. Sure, Matt Hardy got over the broken gimmick with wacky stunts in TNA, but let’s keep in mind that he did all of that while a minimized audience was watching because of the limited distribution of the TNA TV show at the time. So, how much of the buzz around the broken gimmick was based around the reaction to the hype instead of the response to the content? I say this because clearly the WWE audience was familiar with the “delete” chant when he returned to the WWE, but the TNA ratings during that era showed that it wasn’t possible that the majority of the WWE audience watched Impact to know about the delete gimmick. So yes, the broken gimmick got over with a niche audience, which is fine because that was the TNA demographic, but attempting to market that type of a product to the general public is an entirely different scenario.

Remember, the WWE markets toward the causal audience because that allows for the biggest draw possible. The ironic “the fans know it’s a show so let’s do something silly” is geared toward the most diehard demographic because that portion of the audience already knows most of the inside aspects of the industry. In short, the hokey aspects of cinematic wrestling are too “inside baseball” to be a draw for the general public. If a casual fan tunes into a show that has obviously fake sound effects and random background music, it’s cringe worthy and they will change the channel because it’s so over-the-top phony that it insults the viewers. In many ways, cinematic wrestling is basically a parody of what makes wrestling successful.

Considering that Raw has generated record low ratings recently, if anyone wants to claim that cinematic wrestling is going to garner a number, let’s consider the results of these type of tactics in the past. Remember when James Storm appeared to murder Mickie James on Impact? The entire scenario was ridiculous and too outlandish because again, pro wrestling is supposed to at least be based on reality. Even when The Undertaker disappeared from the ring, it was done when the lights went out so it was technically possible that he could’ve left. Using special effects on screen to make someone teleport jumps the shark because it blatantly tells the audience that the show is phony. Did the ratings go through the roof for TNA because of the Mickie James/James Storm segment? As far as lame special effects on the screen, it was a trademark of Wrestling Society X and that project made it two weeks before MTV cancelled the entire series. Sure, the limits of logic can be stretched with professional wrestling, but there’s a difference between that and something completely ridiculous. For example, there was a physical street fight on AEW Dynamite last week and sure, perhaps Sammy Guevara had time to move out of the way of the golf cart, but at least there wasn’t a cartoonish sound effect to make it seem phony instead of impactful.


The MITB match was completely illogical and did more to hinder the entire product then anything else. Both Rey Mysterio and Aleister Black were thrown off the roof of Titan Tower. How exactly does any of that make sense within a professional wrestling show? Other than telling the audience everything is phony, including the legitimate risks the athletes take in the ring, how will their eventual return be explained? Furthermore, how can the audience emotionally invest in any of the other characters in the company when something so blatantly phony is booked on the same show? How is Brock Lesnar supposed to be taken seriously as a legitimate monster when he’s involved on the same brand that does an obviously fake stunt? It can’t be understated how important it is for the audience to be able to believe in a competitor for that performer to became a major draw. Stone Cold Steve Austin became the biggest draw in the history of the business because it was believable that he was a gruff Texan that had to claw his way to the top of the industry. There’s nothing believable or realistic about cinematic wrestling and it’s not something that will draw the general public for the industry.

As far as wrestlers being thrown off the roof, The Giant fell off of Cobo Hall once, and we all know how successful WCW is today.