“Even though Gable is doing this gimmick that screams undercard babyface, we’re told Vince [McMahon] really likes and appreciates him and considers this a push.”

Meltzer added that the short jokes are not being designed to make fun of Gable but rather Vince feels the jokes will get fans behind Gable.

– As previously noted, Vince McMahon was not in attendance for this week’s episode of RAW. According to F4WOnline.com, Vince and Kevin Dunn were not at the show due to promotional meetings with FOX. 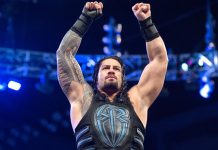