The draw of professional wrestling, especially in the modern era, particularly from the WWE product, was based a lot on the nostalgia of the industry, the classic moments that so many fans remember as key moments in their lives. Fans remember watching the Monday night war they as it happened, not knowing who will show up where, and a small percentage of them that would deal with the tedious process of dial-up internet connections to attempt to get the latest dirt on the sport. Others might remember where they were when they saw Paul Orndorff finally turn on Hogan or when Macho won the WWF title at Wrestlemania IV.

As far as a business strategy, the nostalgic selling point makes sense, as it’s another revenue stream and ultimately, in some form or fashion, more content for the WWE machine to churn out, which is key when you take into account that the company’s most profitable deals are based on the hours of content it produces for television and Peacock. One of the perks of winning the wrestling wars of both the 80s and the 90s is that Vince McMahon can collectively market the vast majority of the history of the business in America to his audiences, even if those fans might not have seen the original run of a promotion. Sting, Goldberg, and others from the WCW era all played key roles in the past several years of the WWE business plan, mostly for the initial purpose to promote the video games. As much as I don’t understand why people watch others play video games on Twitch, there’s no doubt that the video games are big business for sports entertainment. As we know, the reception to guys like Sting and Goldberg ultimately led to more current runs in the WWE, and thus a completely line of new merchandise with it.

It’s a win-win for everyone involved since the company makes money, the talent makes good money later in their careers, and the fans are happy to get a chance to relive the glory days.

But, even that fun trip down memory lanes has its draw backs, specifically the problem that so many have discussed in recent years, where are the new stars?

I don’t talk about myself too often in this column, simply because you click these articles (and I sincerely thank you for it) to read about wrestling, not me. However, when I was getting another tattoo in honor of one of my dogs, the late Bubber II, who was named after the original Bubber, similar to the Tiger Mask legacy, last month, the tattoo artist mentioned an interesting point about the state of sports entertainment. A quick side note, I never wanted a dog and don’t necessarily consider myself a dog person, but once you fall for them, you embrace me. So yes, I never wanted a dog, but now have two tribute tattoos to the dogs I had. There’s a swerve for you, right? Hank is the current dog champion of the house, but he’s only four so there will be no discussion of tribute tattoos.


Minus the sidebar, the wonderful Lisa Black, who I originally talked to at a comic con where I met Sammy Guevara, Dustin Rhodes, and JBL last year, was working on the Bubber II paw print when she mentioned that “wrestling used to be so much more memorable” and since that conversation, I’ve really put some thought into, “why is that the general consensus for the sport?” As she continued to add the shading with the handheld tattoo gun, she said that The Rock N’ Sock connection was her favorite. Granted, it’s easy to pick an act from the hottest period of the business as a favorite, but again, the question remains, why haven’t there been as many iconic moments in more recent years?

I’m not sure if this answer will be ground-breaking or completely obvious, but I guess it depends on the perspective. Part of the WWE process to take the company public and thus make it a billion dollar company on Wall Street was that the corporation had a very specific presentation in the past several years. For example, the state-of-the-art production always looks great and the broadcasts have a certain format that’s always followed. Along with that, the WWE machine built the Performance Center, a facility with some of the best trainers in the world. In theory, the PC can take any great athlete and transform them in the exact sports entertainers that Vince McMahon wants to promote for his brand. That sounds great in theory, but how does it apply to the actual business?

Again, in theory, it’s a great idea to attempt to train competitors in the “WWE style” because those are the parameters that the performers will work with when they debut on television. However, and this might be the biggest flaw in the entire system, you can’t simply “create a superstar” when the business could use another big draw. If that were the case then there would never be a down turn in the business. Someone might be a great athlete, but that doesn’t automatically mean that they will be a great sports entertainer. In fact, given the unique nature of professional wrestling, I think it’s fair to say that those that are extremely successful in the business have intangibles that can’t be taught on a sports entertainment assembly line. Too often there are too many carbon copies of the exact same performers that get put through the WWE developmental system, and even the main roster often has a cookie-cutter format. Is there anything less memorable than something cookie-cutter?

We’ve talked about the 50/50 booking aspect where the bulk of the roster are kept at relatively the same level instead of key talent being viewed as stars. There’s a reason that Roman Reigns, Brock Lesnar, and Ronda Rousey are viewed as a level above everyone else on the roster. The most disappointing part of all of this is that the talent is there, and in terms of in-ring ability, this might be the roster with the most depth in the history of the company, but at the same time, you could make an argument that it’s low on star power.

Outside of Bianca Belair’s emotional promo after she won the Royal Rumble a few years ago, how many organic moments were there in recent years? Yes, Steve Austin vs. Kevin Owens at Wrestlemania this year was a great moment, but again that was based on an era before there was a corporate assembly line of sports entertainers. We’ve seen speculation that the product will return to a TV-14 rating, which gives the structure of the shows more flexibility, but it doesn’t guarantee better scripting of the characters. Seth Rollins is one of the best overall performers on the roster, but is often booked and scripted like a dork. Rollins is a tremendous talent, but isn’t going to be a major star when he’s scripted to sound like a ripoff of The Joker.

Listen, the WWE is worth a billion dollars, and I’m not so obviously they run a corporation better than I would, but I still think it’s a fair question to ask, is selling nostalgia essentially taking the short-end money now in exchange for stars in the future? Granted, from strictly a business prospective, the WWE is more profitable now than another other time in its history so almost any criticism is moot. That said, based on the sluggish ratings of the past few years, will they company get the same amount of money for their next TV contracts?

Roman Reigns is finally the top star the company wanted him to be, and he’s doing the best work of his career. That was possible because instead of trying to shoehorn him into the role of the next John Cena, they allowed him to evolve into the top star as Roman Reigns. Still, Cena is the most recent main stream star the company had, and Roman is already taking a lighter schedule so who’s the draw for the future?

You could question if the current structure of the company is more to serve the stockholders than to create money-drawing stars?

That’s not the same concept, either. Selling nostalgia is big business for WWE and the stockholders are concerned with a return on their investment, not content. Does the guy that bought WWE stock care if his profit was based on a Goldberg return or a new star? The difference is, the Goldberg return is a limited commodity, where as the new star is a level of security for the future.

Why was pro wrestling more memorable two decades ago?

Granted, some people will always look back fondly at certain times of the sport, but the bottom line is, Steve Austin, The Rock, and Mick Foley were the biggest WWE stars of the hottest period of the organization. Did any of them resemble a cookie-cutter WWE format? If not, then prehaps the key to more memorable characters in the modern era is a more organic approach to the product. 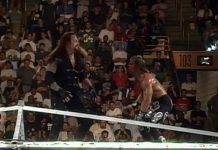