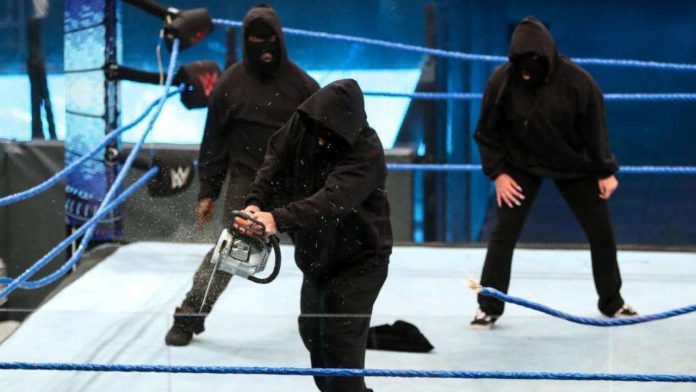 Over the past few weeks, the vigilante stable, Retribution has crashed WWE shows at the Performance Center, throwing bricks through the doors of the facility, interfering with the broadcast, and even destroying the ring on Smackdown. The bold antics have been enough to spark some intrigue in the rather bland product of the pandemic era, but you have to wonder, will there be a payoff to this angle or is it going to be a major letdown?

The reason I ask this is because, much like Raw Underground, the writing team appears to favor anything out-of-the-box recently in an attempt to boost sluggish ratings and most of it is more or less their attempt to throw anything against the wall to see if it sticks to stabilize viewership. Granted, the majority of these tactics like Raw Underground with its countless camera cuts or Tozawa booked as a comedy act seem more like desperation than anything else from management to try to avoid the negativity associated with the decline in numbers.

In theory, Retribution could be a stable that ushers in a new and fresh look to the WWE landscape, but its reveal and just as important, if not more so, the follow-up to it could determine if the angle picks up steam or falls flat. There continues to be speculation online about who the members of the stable might be, and it’s logical to expect this stable to be used to introduce new faces, but this can’t be just NXT wrestlers that move up to the main roster because they don’t have the star power among the main WWE audience to generate a buzz about the group. Furthermore, a crew of just NXT wrestlers would basically be a retread of the original Nexus storyline, and we all know how well that got over long-term, considering none of them had the chance to become stars with the initial angle.

In my opinion, the Retribution stable will need someone recognizable to be involved in the group to generate some hype around it and thus be able to put a spotlight on the lesser known members. I saw some speculation online that perhaps CM Punk might be brought back into the fold, especially because his stint on the now-defunct WWE Backstage show got him involved in the WWE environment again without anything too direct, which could’ve helped mend some of the animosity between the two sides. Punk said in the past that he would be willing to talk to the office if it was the right opportunity, and since his UFC career didn’t take off the way he hoped, it’s possible that he was away from the ring long enough to allow for some of his hostility toward the industry to fade. Plus, with the mega TV deals now a major revenue source for the company, they might be able to offer him a deal that could persuade him to work a limited schedule.

From a storyline respective, CM Punk as the leader of a rouge crew of wrestlers makes sense because it could be his way to get “retribution” toward the company that he publicly spoke against for the way he thought he was mistreated during his run there. The circumstances for it are right, as the WWE has the previously mentioned TV money to throw enough cash at him to make him consider a return, the product obviously needs a spark that his return could deliver, especially after the public disagreements between the two sides, and Punk has the leverage to work a schedule that could make a return to the company at least possible.

Don’t get me wrong, do I think CM Punk will be the leader of Retribution? No, but it’s not impossible either. For those that discount this option because of the way Punk left the promotion, keep in mind that Ultimate Warrior, Stone Cold, Brock Lesnar, and even Bruno Sammartino eventually made their way back to WWE. As is usually the case in business, cash in the key and there could be a lot of money involved for everyone, particularly a way to build some hype around the company again if Punk is back to seek revenge with a stable of NXT wrestlers. As I penned in an article last month, I really think that Punk had the talent and was over enough to bring pro wrestling back into the main stream conversation with the notable run he had in 2011, but management squashed it because it wasn’t a part of their corporate agenda. That sets up for his involvement in the Retribution stable and it would undoubtedly draw better numbers for Raw.

Now, if Punk isn’t involved, there still must be someone will legitimate star power to put over the rest of the stable as a credible threat to the company. So far, the vignettes have been rather tacky and considering that Linda McMahon donated $6 million dollars to the Trump campaign in 2016 and had a spot in his cabinet, you have to wonder if the nature of these segments were an attempt to spoof some of the discontent of current society. NXT has a stellar roster and there’s speculation that this stable will consistent of some of those stars, but remember that NXT is the lowest viewed show on WWE TV so those competitors don’t have the same exposure as the roster of Raw or Smackdown. If the Retribution reveal is just a group of vaguely known NXT stars, it might be a rather flat moment for the Raw and Smackdown audience. If there’s someone with star power as the figure head, it can give the storyline more depth and that makes it possible for a better follow-up after the reveal. As mentioned, arguably the most important aspect of the entire angle is how the group will be used after they unmask on television. The Nexus angle didn’t make any long-term stars because the entire stable was more or less used as a way to give John Cena opponents. After Cena defeated them, they didn’t have a direction to go on TV. Those from the original Nexus that eventual got over were repackaged before they made progress to be seen as a star in the WWE. Considering the typical shift in direction of Raw in recent months, it will be interesting to see if management actually has a specific plan about where the angle will go or if it’s booked week-to-week depending on the ratings, but if WWE brass wants the group to have any mileage after the reveal then it must be presented as a credible stable on WWE TV. That being said, if I had to guess, I would say that this angle probably won’t have a conclusion that makes its members bigger stars because the booking the past several months hasn’t done much to solidify any new stars for the company.