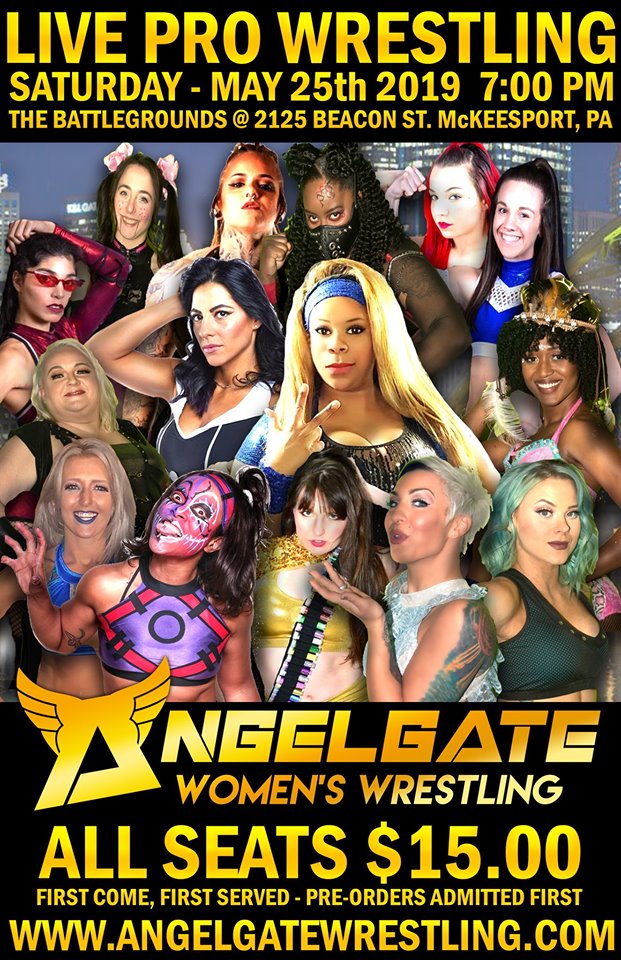 The year of 2019 saw the further emergence of women’s wrestling to reach some of its highest levels in the history of the professional wrestling industry. Female grapplers are no longer regulated to a novelty act, but rather given their rightful chance to showcase their ability as athletes inside the ring ropes. This transition to a focus on in-ring competition for ladies in the business can be seen on every level, from the national stage to aspiring hopefuls that step into the squared circle to start the training process on the dirt-stained canvases of training centers.

Another key aspect of professional wrestling this year is the new opportunities that are flourishing throughout the genre. This weekend at a converted school building that was transformed into a throwback wrestling venue nearly eight years ago, Angel Gate Women’s Wrestling will present its first live internet pay-per-view. Angel Gate was a project that launched last year under the umbrella of the Pro Wrestling Express promotion, an organization with over two decades of history with events in McKeesport, PA, a city roughly thirty minutes outside of Pittsburgh. A region as well known for its wrestling as the steel it produced, the western Pennsylvania region has a dedicated fan base that followed the PWX product throughout the years. Despite its lengthy history, the PWX group took a major step in the evolution of the product when it began the all-women’s league in March of 2018 to supplement its “Fight Society” shows that run regularly as well.

“For us, with over twenty years of shows, we wanted to bring something new to the fans to compliment the history of this area. Angel Gate allows us an avenue to bring in female stars from around the country to compete for our fans. The live pay-per-view gives outside fans the chance to watch the action unfold as it happens. It’s a great opportunity for everyone,” said Quinn Magnum, a now-retired veteran wrestler that has worked as an organizer on the PWX office staff for the past several years.

With the extensive history that Pittsburgh is known for, Angel Gate set a goal to bring something new to the area, including talent from multiple states and even other countries to create a product that featured some of the top talent on the independent scene. Lady Frost, who made her pro debut just last year on national television during a Monday Night Raw bout against Asuka, has quickly ascended the ranks of the independent circuit, including as an entrant in Chikara’s Young Lion’s Cup this past March, as well as recently signing with the Ring Of Honor dojo. An athlete in various sports before she pursued the squared circle, Frost brings a dynamic and unique style to the ring. Her skills also earned the praise of the legendary Mick Foley earlier this year. However, this Saturday brings a tough test for her as she will challenge Queen Aminata, a competitor that made an impression of her own on a national stage just a few weeks ago, competing in a tag match against the Kabuki Warriors on Smackdown Live. Originally from Guinea, Aminata is as intelligent as she is athletic, learning to speak four different languages before she began her journey in the sport.

The hard-hitting team of @KairiSaneWWE & @WWEAsuka are taking it to the competition on #SDLive! pic.twitter.com/I20cpJ7kCY

“It’s always a privilege to be a positive part of history in whatever way it may be. I’m happy to be a part of this Pittsburgh promotion that’s trying to create a path for women, fans, and the community. I’m really looking forward to the future of Angel Gate,” Lady Frost said.

One of the most unique aspects of the Angel Gate project is that it provides a platform for a wide array of competitors from rising talent to longtime veterans. One of the most tenured wrestlers scheduled for the event is Missy Sampson, who has 24 years of experience to bring to the table. As she zigzagged across the independents for more than two decades, she earned a reputation as one of the toughest females in the sport.

“The IPPV this weekend means an opportunity to show a broader audience that those of us who have been around for a bit can still go. It allows us to share the show further than the local audience. It’s a great opportunity for not only the wrestlers, but to also expand the fan base of Angel Gate as a newer promotion. The fans can expect from me this weekend what I have always delivered to them, giving 100% of myself once I step in the ring. I will be making time to meet them before the show and intermission and showing that even the more seasoned competitors shouldn’t be overlooked,” Sampson commented.

On the flip side, a rookie will also get a chance to shine on this card as the self-proclaimed “Adorable Doll” Annabelle will compete at the event. With just a year of in-ring experience, she looks forward to using this stage to make a name for herself in a sport she wanted to learn since her youth. Standing just 5’2, Annabelle makes her way in pro wrestling through grit and determination.

The Angels return to action on May 25th. Join us LIVE at the Battlegrounds and on iPPV!

“When I started training, most people just wrote me off. I wasn’t what a wrestler was supposed to be, but I kept showing up because this is something I always wanted to do. The support from the other wrestlers and the fans means a lot to me,” Annabelle said.

With established names like Holidead, the twerking Ray Lynn, and several others from the independent circuit are among the line-up of the stacked event, possibly the most anticipated match is the main event for the Angel Gate championship. The inaugural champion Roni Nicole has dominated the competition thus far at Angel Gate events, utilizing the Japanese style she perfected during extended tours of various promotions in Japan. Her opponent, Toronto’s KC Spinelli has made a name for herself for being as loud and as skilled as anyone with her well-rounded ability. “Two Scoops” became a favorite with the Angel Gate live audiences for her charismatic persona and thrilling bouts. The buzz among many ahead of this contest is, who will claim the championship on such a big night for the promotion?

.@Ray_lyn makes her return to Angel Gate . See her square up against @holidead THIS SATURDAY when the Angels return to the Battlegrounds.

Join us LIVE at the Battlegrounds and on iPPV!

While there will be action-packed matches throughout the night, this expanded distribution and the ability for fans around the globe to tune in is only made possible by a hard-working, dedicated video crew. Mike and Missy Sorg founded the Indy Wrestling US and Sidekick Media Services group over a decade ago, and in that time have become the premiere filming company in the Pittsburgh area. Video streaming, podcasting, and editing across several different fields made the Sidekick media crew some of the most recognizable faces in the city, including at their Beechview studio. The video production staff have expressed their enthusiasm ahead of this historic pay-per-view.

“Our team at Sidekick Media Services has over a decade of filming and live streaming corporate and entertainment events. With streaming options more common now, it made sense to bring live streaming integration to Pittsburgh wrestling. We have been implementing and testing live streaming over the past year in an effort to roll out iPPV options, and we feel that Angel Gate is the perfect testing ground given the current evolution of wrestling. The professional-grade custom set-up we use allows us to live switch multiple camera feeds while pulling in audio from the commentary team to push it all out in HD quality with on-screen graphics and banners,” Missy Sorg explained.

A combination of internationally-traveled stars, established independent talent, and Pittsburgh prospects will get their chance to showcase their skills to a pay-per-view audience for a truly unique event. Perhaps the most intriguing aspect of this project is how those athletes match-up to create diverse competition with matches that aren’t usually seen around the independent scene. More than anything, this platform allows for a historic card in Pittsburgh wrestling with major distribution for the athletes on the roster.

For more information about the event https://www.facebook.com/AngelGatePWX
To purchase tickets https://www.eventbrite.com/e/angel-gate-live-womens-pro-wrestling-tickets-59641500333?aff=erelexpmlt
To purchase the pay-per-view https://indywrestling.cleeng.com/angel-gate-women-s-wrestling/E444737764_US