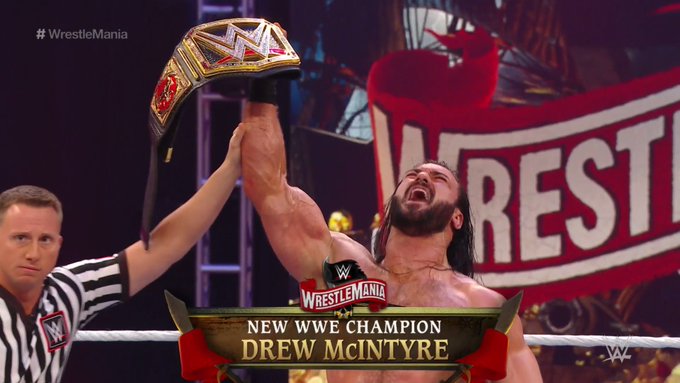 – WWE Champion Drew McIntyre is making headlines in the UK today as he became the first-ever British-born champion in company history by defeating Brock Lesnar in the main event of WrestleMania 36 Night Two on Sunday. BT Sport tweeted this shot of McIntyre’s win making the front page of BBC News:

In such a turbulent time in human history it's great we have WWE to provide an escape. #WrestleMania pic.twitter.com/Asf4WzxvMi

– As seen below, the WWE Performance Center YouTube channel posted video of WWE NXT Superstars, referees and announcers reacting to Night One of WrestleMania 36. The video features Alicia Taylor, Jake Atlas, D.A. Brewer, Jessi Kamea, Raquel Gonzalez, and Josiah Williams. Also below is video of NXT Superstars Ever-Rise, Chase Parker and Matt Martel, showing us their WrestleMania 36 Night One experience from the couch at home.

– WWE Community released this new “Where Smiles Matter Most” promo with John Cena and other WWE Superstars doing what the company prides itself on – putting smiles on the faces of fans.

WWE issued the following to us: “According to Nielsen Social, WrestleMania saw 13.8 million total social media interactions on Facebook, Instagram and Twitter, +57% vs. last year’s WrestleMania, and most in WWE history.”