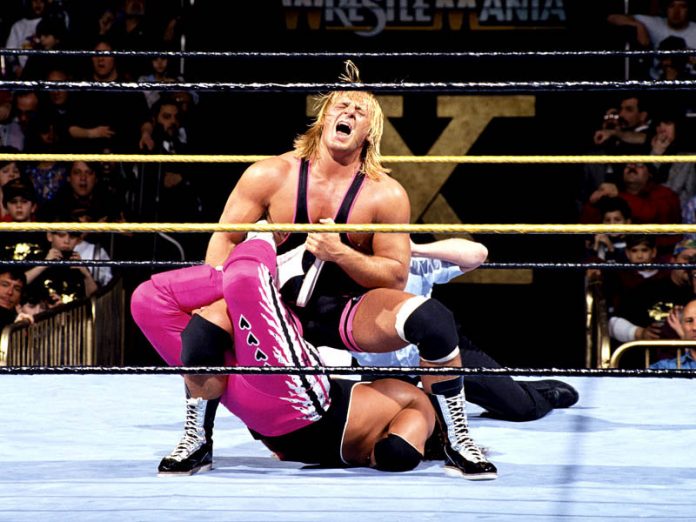 After yesterday’s dismal WM 9 review, thankfully the Wrestlemania challenge series will redeem itself as the “showcase of the immortals” returned to Madison Square Garden, the site of the original event, for its tenth anniversary. While still stuck in the previously mentioned slump of the early-90s, WM 10 is a solid event that sometimes gets overlooked as far as the totality of the event because of how memorable a few of the key matches were. Little Richard starts off the proceedings with a rendition of America The Beautiful that was very well down.

The show opened with the classic Owen vs. Bret match and re-watching this bout, you can notice some of the small details that really make it a masterful performance. One of the elements of sports entertainment that isn’t seen much today, at least in the WWE, is the fact that body language alone can portray an athlete as a villain or a baby face. The way that Owen walked to the ring, it was apparent that he was the heel, and those nuances are one of the many reasons he was such a stellar performer. Obviously, Bret is one of the best of all-time, and his lengthy list of top-tier matches during the peak of his career has to make him one of the most consistent workers in the history of the business. As far as ring psychology, this bout is a textbook example, as everything had an even transition from spot to spot and everything made sense, which is why the nearly 20-minute contest went smoothly on the broadcast. Some 20-minute matches can feel longer than a Hillbilly Jim Hall of Fame speech, but this Bret/Owen classic was a breeze to watch again. Owen got the clean win, something he could use to fuel the feud with his brother later in the year for the eventual cage match at Summer Slam, and it gave Owen a push as a credible threat to Bret’s title since he pinned him before. Bret losing the opening match is similar to what has been done in recent years when the MITB winner loses a match on the show only to successfully cash-in the title shot later. Bret’s defeat in the first match raises doubt about if he could win in the main event.

The Bam Bam and Luna vs. Doink and Dink match was obviously a total gimmick match, but despite the cartoonish format, there were some entertaining spots here. The skills of Bam Bam and particularly his amazing agility are on display as he moves around the ring like someone half his size. Luna and Dink have some fun spots here too. At the same time, it’s somewhat disappointing that Bam Bam was booked in a comedy match since it appears that he could’ve had a much bigger role in the company at the time. Bam Bam and Luna get the win, but the post-match shenanigans were clunky, including when Dink was supposed to avoid a splash from both opponents, but only escaped Bam Bam, as Luna still landed on him, causing her to have to sell a splash that didn’t actually miss the intended target.

Randy Savage vs. Crush was a fun brawl, but the rules of the falls count anywhere match were a little odd, as a pin fall was done outside of the ring and then the opponent had sixty seconds to return to the ring, but it wasn’t made clear if a pin fall could only happen outside of the ring. This would be Macho’s last WM appearance since he debuted in WCW before the end of the year, taking the famous Slim Jim sponsorship with him. The circumstances around Savage’s exit from the WWF have been debated for years and some of that discussion has led to urban legends that are merely based on random speculation. The only aspect that appears to be concrete about his departure was that Vince McMahon thought that Savage was too old to wrestle, which is why he was moved to the commentary desk for early episodes of Raw from the Manhattan Center. It’s a little surprising that Vince wanted to keep one of his top stars away from the ring because in 1994 and for almost five years afterward in WCW, Macho provided that he could still go in the ring. It’s also ironic that Vince just promoted 53-year-old Bill Goldberg as champion at Wrestlemania.

The Alundra Blayze/Leilani Kai match was solid, but you could clearly see the generation divide in terms of their style. Blayze, who made much of her name in Japan, brought the Japanese style to the WWF at a time when that style was mostly not seen in the United States. Leilani did fine in the match, but she was essentially using the Moolah playbook with the hair flip and body slams that weren’t relevant by 1994. In many ways, it’s very disappointing that Medusa’s prime was at a time when a women’s division was almost non-existent on a major league level in America. She was signed to the WWF and was stellar in the ring, but there often wasn’t a division for her to work with. Granted, the WWF brought in some Japanese talent during her run, but there weren’t necessarily storylines for the Women’s title. However, Medusa had some great matches during her WWF run, including a bout against Bull Nakano at Summer Slam this same year. Medusa’s contract expired while she was still the WWF Women’s champion and she infamously trashed it on Nitro in 1995. Unfortunately, the same problem in the WWF happened again in WCW, as the Turner organization also brought in some of the Joshi talent for part of Medusa’s initial matches, but she eventually didn’t have any opponents again. The sum total of all of this is that Medusa probably didn’t get the credit she deserved for her career.

The Men of a Mission vs. The Quebecers was actually a decent tag match with some good spots. The actually gimmicks were very cartoonish, but that was the product at the time. It was interesting to see Johnny Polo at ringside roughly a year before he became Raven in ECW. The Lex Luger/Yokozuna match that would see the winner advance to the main event to defend against Bret as a result of the finish of the Royal Rumble match a few months earlier is an example of how over Lex wasn’t during this push. The actual contest went too long because most of the spots designed to get the crowd to rally around Luger for a comeback got a lukewarm reaction at best and it was clear that the audience just wasn’t that invested in Lex Express gimmick. Yoko retained the title with a fluke DQ after Luger pushed Mr. Perfect, who was the special guest referee. It should be noted that while Lex probably didn’t have the in-ring ability to be the top draw in a company for an extended period of time, he was put in a very difficult position and it’s doubtful that anyone would’ve been able to get the Lex Express gimmick over. Hulk left the company after King of The Ring 1993 and within just a few weeks, management tried to replicate the red, white and blue gimmick with the Lex Express tour in the months before Summer Slam. It was too obvious of a rip off of Hulk Hogan and the fans just didn’t buy it.

Earthquake beat Adam Bomb in about 25 seconds in a rather pointless match, but as I’ve said before, if these guys got a WM payday for that then good for them.

Next up is the iconic ladder match and since it’s one of the most discussed matches in history, I’d like to point out a few other things. After a DVD trade a few years ago, I found a disc of a fan cam recording from a WWF house show from early 1994 where there was ladder match between HBK and Razor as a way to get familiar with the structure of the ladder match they would later present a WM 10. While ladder matches had been done before, as far back as Stu Hart’s Stampede Wrestling, they weren’t anywhere near as common place in the early-90s as they are today. A side note about Scott Hall, for as much as his personal problems almost overshadow some of his career, it must be mentioned that when he was on, Hall was as good as anyone in the business.

The main event was the solid bout you would expect it to be with the David vs. Goliath dynamic. Considering how dominate Yoko was on TV prior to this, it was a major push for Bret to beat him to win the championship. Still, in retrospect, it’s obvious that this win should’ve been a year earlier, but instead Hogan had to get he spotlight before he left again. On a better note, this title win is the start of a tremendous series of top-tier matches that Bret has as champion for the next few years.