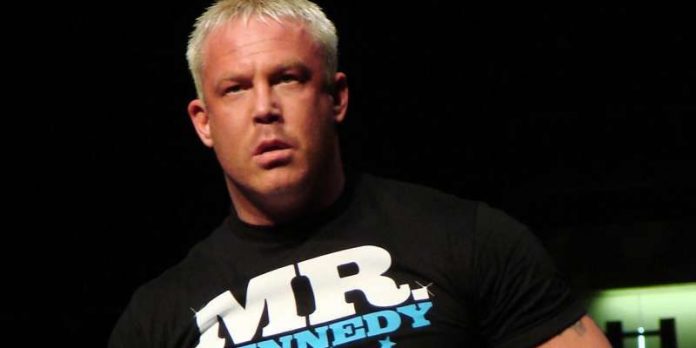 The Wrestlemania brand returned to Detroit, the same place where the franchise held the event twenty years earlier in front of over 93,000 fans at the Pontic Silver Dome. The opening segment was very well done, as footage from Anthrea Franklin’s performance of America The Beautiful was included with the Queen of Soul’s return to the event for another wonderful performance. The show kicked off with the Money in The Bank ladder match and as had before the tradition of the past few years, this was a risky spot fest that had several memorable spots. Finlay suffered a nasty cut on the top of his head from a ladder. Jeff Hardy did an incredible dive from the top of the ladder, putting Edge through another ladder on the outside before the spot because repetitive and predictable. Eventually, Mr. Kennedy won the briefcase to earn a title shot. Ironically, when The Undertaker suffered an injury a few months later and had to drop the belt, Kennedy was originally scheduled to cash-in at a Smackdown taping in Pittsburgh that I actually attended live at the Mellon Arena, the venue that hosted Penguins games before the PPG Paints Arena was built, but he had a misdiagnosed injury himself that led to him dropping the briefcase to Edge, who successfully did the cash-in after a Batista-Undertaker cage match. I wanted to mention this because it really shows how far Kennedy’s stock fell in such a short time. The details of his release from the company in 2009 really depend on who you ask, but one thing is for sure, Kennedy had the charisma and the skills to be a world champion, but it never materialized. Granted, the native of Green Bay, Wisconsin did himself no favors in the big picture because in the four years he was on WWE TV, he had injuries, he violated the wellness policy, and there was the infamous back suplex on Randy Orton that many suspect led to Kennedy getting fired. The point being, one way or another, management didn’t want to invest more TV time or promotional dollars into Mr. Kennedy. Was it fair? Probably not, but considering his underwhelming career path in the past decade, maybe management made the right decision. Either way, it’s very disappointing that Mr. Kennedy didn’t get the chance to have a run as world champion.

Kane vs. The Great Khali…enough said.

Chris Benoit beat MVP to retain the US title in a decent contest, but nothing too great. I know that some fans are happy to see MVP’s recent return to WWE for the nostalgia, but I have to be honest, he never really impressed me as far as his skills in the ring or on the mic. If I had to guess, I’d say that the MVP gimmick of a brash athlete with a big time contract sounds great in theory, but was average at best in application. Maybe there’s something he brought to the table that I didn’t get, but I didn’t see anything special from his average promos and at best average matches. That being said, he was able to generate a career far beyond his stint in WWE, including a extensive run in New Japan so good for him.

The Undertaker vs. Batista was a really great match that surprised many people at the time, simply because Batista wasn’t known for top-notch bouts in 2007. This was really a great performance by both athletes, and as we know, Batista would later do his best work as a heel so perhaps his relatively quick push to the main event in the mid-2000s didn’t give him a chance to develop his skills until a few years later when he had the previously mentioned stellar heel run. There are a few other things to mention about this bout. It was a prime example that Smackdown was clearly considered the B-show by management for much of its existence because despite The Undertaker winning the Royal Rumble to get the title shot, this contest is booked literally in the middle of the card. Furthermore, this was the first time that the streak was put in major jeopardy and it was a focal point of the match. Also, it should be mentioned that The Undertaker won with the tombstone, and Batista didn’t kick out of it before the finish. Too often in the modern era, finishers are overused in an attempt to create a false finish, but the result was basically just reducing the value of the finisher.

The ECW originals vs. The New Breed was a solid action-packed match, but the circumstances of this showcase prove how doomed the entire project was from the start. Granted, it’s very possible that Vince brought back the brand to eventually sour fans on it to quiet the ECW chants, but there was a critical event that shifted the entire focus of the brand just weeks after the relaunch in 2006. For years, fans claimed that Rob Van Dam could’ve and should’ve been given a main event run in the WWE, and it appeared that he definitely had the skills. When RVD won the WWE title from John Cena in 2006, the newly reformed ECW brand was the focus of the product because he was a double champion and there was an anticipation for the return. The new ECW was going to go as far as the face of ECW, Rob Van Dam was going to go as WWE champion. Within a few weeks of finally winning the WWE belt, RVD was arrested for drug possession after a house show and dropped both belts the following week. Was Rob Van Dam underutilized in WWE? Absolutely, but he has nobody to blame but himself for fumbling the opportunity when he got the chance to get a main event run. Obviously, it’s not good PR for the company if the champion is arrested so they shifted away from him. Without RVD as the foundation of the brand, there wasn’t much management was going to do to promote the ECW brand. The originals won and for at least this show, they were presented as extreme legends.

The Bobby Lashley vs. Umaga bout was fine, but considering that the match was secondary to stipulation and the aftermath, the bell-to-bell action and even the participants didn’t necessarily have an impact on the segment. The entire selling point was Vince McMahon and Donald Trump at ringside with the intrigue of one of them getting their head shaved after the contest. Obviously, the orange villain wasn’t going to get his head shaved so Lashley won the match to set up Vince getting his head shaved on pay-per-view. Say what you want about Vince, but the guy will do whatever it takes to make headlines, including embarrassing himself, as he appeared to cry with his expensive suit covered in shaving cream. This is a scenario where the moment was more important than the match, and Vince sobbing while looking completely ridiculous in a disheveled suit was the payoff of the segment.

Melina defeated Ashley Massaro to retain the women’s championship in an okay match, but this wasn’t really given the time to be another more than just something to pace the card before the main event.

The main event of John Cena defending against Shawn Micheals was a 30-minute contest that built intensity throughout the match with a physical bout that probably doesn’t get talked about enough today. Cena had a nasty cut on the top his head from a pile driver on the steps, and HBK delivered stiff chops as the drama unfolded. There was a lot of good back and fourth action that kept the crowd following the exchanges to see who would get the advantage toward the conclusion. John Cena won with a submission to retain the championship.