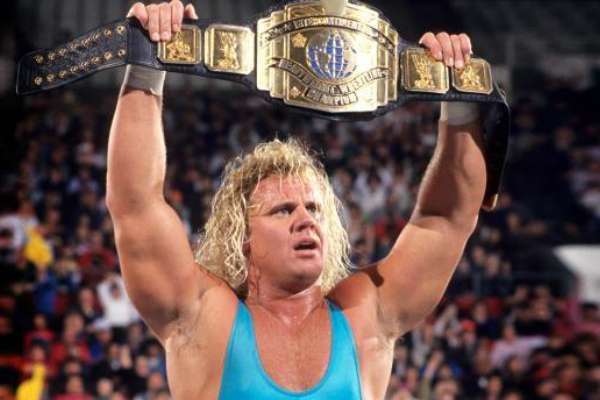 Happy Easter to everyone that is celebrating today and let’s all pray to any of the Gods, the sun, and Joe Pesci that this pandemic concludes as soon as possible. The Wrestlemania challenge series returns to the Trump Plaza for another wrestling card, which as I mentioned in yesterday’s write-up, this is another bought show, as Trump paid a fee to bring the event to his venue and had the choice of how to distribute tickets with either a sale to the general public or comps given to high rollers to bring them into the casino to drop some cash at the tables. Despite being more of a promotional tool for the Plaza complex, this year’s show was much improved compared to the dreadful tournament format of the previous year.

A mostly forgotten opening saw Rockin’ Robin sing the stars spangled banner, which was her only appearance on the show despite being the women’s champion at the time. The actual event started with Haku vs. Hercules in an average match that had some decent moments. Haku would go on to have more success in this era as a team with Andre The Giant, and then later on have an extensive run in WCW. All things considered, it’s puzzling why Hercules didn’t have a better run in his career since he had the look of a star and brought intensity to the ring. Arguably, his most successful stint was as a tag team with Paul Roma in 1991, but that tenure lasted less than a year. Despite wrestling for a few more years after his WWF departure, Hercules’ career fizzled almost completely after the Power and Glory run.

Speaking of power, the Twin Towers of Akeem and Big Boss Man were next against The Rockers of Marty Jannetty and Shawn Micheals. This is one of the few hidden gems that The Rockers had as a team at WM that doesn’t get discussed enough, simply because Shawn would have so many iconic bouts on his own that eclipsed the mid-card tag matches. The Rockers brought an entertaining fast-paced style, and with how agile the Twin Towers were, they could keep up with their smaller opponents to create some really fun spots. A few other things to notice in this contest were that you could already see the poise that HBK brought to the ring even this early in his career. It’s very disappointing that Akeem’s career more or less got shifted as an inside joke on Dusty Rhodes because Akeem could move extremely well for such a massive competitor. That being said, you have to wonder why WWF management didn’t do more with him outside of the comedy gimmick, especially considering that a return to the One Man Gang persona could’ve rejuvenated his status in the company. Much of the same can be said for the Big Boss Man in terms of in-ring ability, but thankfully, he had the chance to get over without the hurdles of comedy booking. A side note about another Rockers hidden gem is their match against the Orient Express next year.

The question about why Ted DiBiase, even as Vince’s tailored Million Dollar Man gimmick, never won a world championship is asked on a semi-regular basis when discussing the history of the genre. I’m not sure a concrete answer of the reasoning was discovered, but this bout against Brutus Beefcake is a prime example why he wouldn’t get a push toward the title again. Just the previous year, The Million Dollar Man bought the WWF title from Andre to set up the tournament before he made it to the finals against Macho. DiBiase went from one of the key figures in the main angle at WM IV to a mid-card match that finished in a double count out the following year. It was a decent match, but there was a definite decline in his stock over the span of the year. Since Ted worked for the WWF in various roles through 1995 before he jumped ship to work for WCW in 1996, it appears there actually wasn’t a specific reason or a booking plan that kept him away from the championship. If I had to guess, I’d say that DiBiase was just never at the right place at the right time, in terms of others stars that were already more established as the top draw. Years earlier when he was in the conversation for an NWA title run, names like Dusty and Flair were drawing too much money to logically switch the belt to a lesser known wrestler. When Ted got over in the WWF, it was still in the midst of the Hogan era when baby face champions usually held the championship. Of course, Brutus would reach legendary status with such gimmicks as The Zodiac, Booty man, and the Disciple.

As you would expect, The Bushwhackers vs. Rougeaus was a total gimmick match, but even as a gimmick match, it was mostly subpar. The only redeeming quality of this segment is the entertaining banter between Jesse Ventura and Gorilla Monsoon on commentary. In a segment that is so ridiculous that it’s tremendous, Mr. Fuji is shown on the boardwalk for the “Wrestlemania Run,” a race that was held the day before the event. Fuji, wearing his full tuxedo and carrying his trademark cane, shuffles down the boardwalk as the rest of the field zips past him.

Thankfully, the card picks up from here as Mr. Perfect squares off against Owen Hart in the Blue Blazer character. Owen shows a little bit of inexperience at times, but the pure potential shines through during this bout. This contest is also a textbook example of why Curt Hennig was such a tremendous worker because he made the Blazer look like a competitive athlete and sold very well for him. Obviously, Perfect got the win, but he shined Owen to make the match more than just a random win over a preliminary wrestler. Run DMC showed up to perform the “Wrestlemania Rap,” which consisted on them walking around the ring yelling, “Wrestle!” and then “Mania!” but not any other lyrics. Their classic rendition of the DX theme song a decade later was much better.

Demolition defended their titles against The Powers of Pain and Fuji in a handicapped match, which was a rather odd scenario, but Fuji was more or less shoehorned into the match because his heel turn started the feud. The match was decent for what it was, and the entertainment value was based more on the mayhem of the face-painted grapplers in the ring than any of the actual wrestling. The next tag match on the card was The Brain Busters vs. Strike Force, which was solid and featured Rick Martel’s heel turn before he became a model. In some ways, it’s disappointing that Arn and Tully spent such a brief time in the WWF, and even more disappointing that upon their exit to return to WCW, Tully’s career was more or less over when he failed a drug test, which prompted Jim Herd to revoke the contract offer. Outside of a one-off WCW pay-pay-view appearance and a few ECW bookings, Tully basically disappeared from the wrestling scene until he resurfaced in recent years. While Blanchard has done very well as a manager in AEW, let’s not forget that he was one of the best of his era, especially during the prime of his career. The final tag match on the card was an early version of Rhythm and Blues against the Hart Foundation for a basic contest so there’s not much to really say about it. Although, “The Hammer” looked as bitter in 1989 at WM as he did in 2009 at independent shows.

With as fondly as WM 5 is remembered for the Mega Powers explode angle, this show had a few absolutely nothing matches on the card. Dino Bravo vs. Ronnie Garvin could’ve been something, but it was two minutes bell-to-bell for a segment that just wasted time. The double DQ of Hacksaw Jim Duggan vs. Bad News Brown would be better off if it was forgotten by everyone, including those involved in the match. The few minutes of The Red Rooster vs. Bobby Hennan showed that “The Brain” was a better worker than most on the card, but was booked just to pace the show before the main event. For some reason, Brooklyn Brawler was at ringside with Hennan for the match. I guess you have to give credit to Steve Lombardi for getting a WM payday. I don’t want to say anything negative about Andre, specifically because of his well-documented health problems during the later portion of his career, but Jake Roberts selling is the only thing that prevented the match from being a total disaster. Andre looked unsteady even when he delivered offense and because of his limited mobility, there wasn’t much Jake could do for a comeback during the bout.

On a better note and speaking of selling, the IC title bout of Rick Rude vs. The Ultimate Warrior was a solid match because Rude made Warrior look like a million dollars. Warrior was still sloppy and dangerous, almost dropping Rude through the ropes at one point, but his intensity worked very well because he had someone as stellar as Rude to sell for him.

The main event of The Mega Powers explode was just a classic example of tremendous story telling in sports entertainment and the drama that unfolded during the course of the match reflected the narrative well. The video package that reviewed the storyline before the bell was very effective because it summed up the year the built up the match. Hogan and Savage were in top form here and delivered a solid match. Hulk getting the win was predictable, but after a year of a heel champion, it made sense to make the switch to Hogan again.