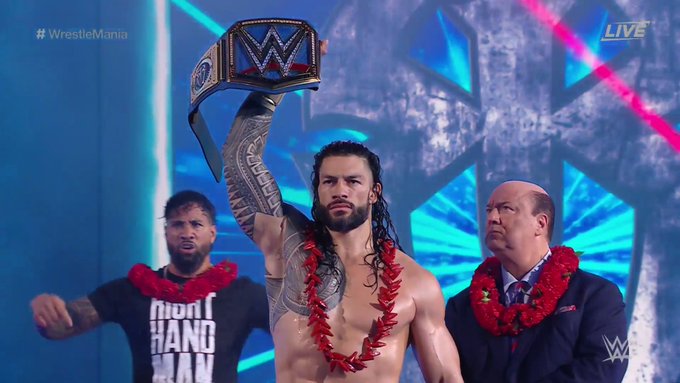 After the sentimental conclusion to night one, the second event of Wrestlemania actually had two heels in the main event. As I wrote yesterday, night one had its share of hits and misses, particularly the pacing of the show because despite the nearly 40-minute delay to get a match in the ring, all the extensive video packages were used as scheduled. On paper, I thought night two would be the stronger show, but how did the event compare live on pay-per-view?

The Fiend/Randy Orton match that started the show was the goofy and lame presentation that we thought it would be. It didn’t make sense, there’s still no indication of who the baby face or the heel is, and the finish was something from the Vince Russo playbook. Aside from just about everything, the main problem with the portray of the entire angle is that the gimmick spots were presented in the open since the company didn’t have as many safety precautions to take into consideration with no fans in the building. It was much easier for the company to burn a mannequin in the ring when it’s in a more controlled environment. That’s where the huge gap in logic is in this storyline compared to similar angles of the past. It wasn’t implied that The Fiend was burned and thus leaves the door open for some type of return because there’s at least the possibility that he somehow escaped or avoided the fire. Instead, the storyline is that “The Fiend” was completely burned live on camera. There’s no room for interpretation or stretching the limits of logic.

For a comparison, when Kane put The Undertaker in a casket at the Royal Rumble in 1998 and set it on fire, it was later revealed that it was empty after the fire was extinguished. Sure, it stretches the limits of logic, but it’s pro wrestling. The point is, the audience never actually saw The Undertaker on fire so there are ways to book his return. In a similar fashion, if Criss Angel made a tank disappear, the audience knows it’s an illusion, but they don’t know and can’t explain how it was done so there’s a level of mystic around it. The angle with The Fiend went to the other end of the spectrum, the audience saw “The Fiend” burned and melted in the middle of the ring so how exactly is there any logical explanation for how he survived? I understand this is sports entertainment, but the narrative is based in reality, Edge didn’t bring a ray gun to the main event to try to defeat Roman Reigns for the championship because the event is within the limits of sports competition.

As far as the heel and the baby face, a dynamic that is key for any great angle, is The Fiend the heel for tormenting Randy Orton or is Orton the villain for trying to commit homicide on live television? Furthermore, if management was going to use the costume that makes The Fiend look like a toasted marshmallow, at least it sold the fact that he was on fire, something the entire viewing audience saw when he was lit on fire in the ring on live pay-per-view. Doesn’t the fact that Bray Wyatt emerged from ringside prior to this match in his usually outfit make this whole thing exponentially more ridiculous? The story is, he was burned and he had a costume that looked like he was burned. The small fact that he shouldn’t have survived melting in the ring is ignored. How exactly did he completely heal all the previous damage? There’s more logic in an episode of the Twilight Zone because there’s a consistent narrative throughout the episode. The finish with Alex Bliss and the Papa Shango ooze didn’t make any sense either. Orton got the win and let’s hope this angle is never mentioned again.

The women’s tag title match was fine, but I had very low expectations for it. Nia Jax and Shayna Baszler retained the titles. Natalya and Tamina have made a good team, and maybe it would’ve been a better decision for them to win the belts. I could be wrong, but I think Shayna could be used for much more than a mid-card tag team role on the show. In my opinion, Shayna should be in the women’s title picture on one of the brands.

Kevin Owens beat Sami Zayn in a very good match, and it proved just how talented these two are, even if they aren’t featured as often as they should be on Smackdown. Granted, Owens worked a program with Reigns before this and the matches were solid, but that was basically just a way to keep Roman busy until the storyline to set up the Wrestlemania match. I have to be honest, as good as this match was, I think it’s in the same category of the Cesaro/Rollins bout from the night before, it was arguably the best in-ring match on the show, but that won’t make a difference in the grand scheme of things. Throughout his WWE run, for whatever reason, Sami is pushed sporadically and then occasionally almost forgotten about on Smackdown. These two have such an extensive history so it was an easy booking decision to get a quality match on the card, but again, I don’t think the performance will boost their status on the brand. I have no idea why Logan Paul was there or what purpose he was supposed to have, but at least his involvement was minimal.

Sheamus vs. Riddle was a physical and entertaining contest. The biggest takeaway here is that Matt Riddle could be money if management didn’t saddle him with a gimmick designed to make him look foolish and sound annoying. There were online reports that Vince McMahon enjoys Riddle’s clueless character so Vince is probably the only one entertained with the goofy backstage segments. That said, Riddle can go in the ring and a performance of this level on the stage of Wrestlemania should theoretically improve his stock on Raw. It should also be noted that Sheamus, despite the booking not doing him any favors at various points throughout his WWE career, can go bell-to-bell in the ring. The really good match with Drew McIntyre last month and this bout against Riddle prove that Sheamus can still deliver quality performances. Sheamus won the US title, but I would say that these two should have a rematch since it will probably be another solid match.

The Big E vs. Apollo Crew IC title match was brief, but also physical based on the weapons used around ringside. It went only about five match before Dabba Kato attacked Big E to help Apollo win the belt so there’s not much to say about it. Apparently, Dabba Kato was used for some of the Raw Underground segments last year, but thankfully, I can’t recall every detail of Raw Underground. Hopefully, Big E dropping the title is a way for him to move to the Universal title picture because he has all the skills to be a main event star.

It took the office a year, but they finally got it right when Rhea Ripley defeated Asuka for the Raw Women’s championship. This was a really good back and fourth bout that built well as the advantage tilted to each competitor before the conclusion. I don’t think losing the title does anything to affect Asuka because she was undoubtedly the MVP of the pandemic era. She was one of the most consistent performers on the roster and she made her promos work in an empty building. That said, Ripley should have an extended title run with meaningful angles for the title. She has the star quality and management has the task of booking scenarios that can maximize her potential to become a major star.

The main event was good and was structured very well, especially considering that triple threat matches can be difficult to book with a continuous level of action. While it was entertaining, the finish wasn’t really in doubt and even during the near falls, it didn’t really have a moment where the audience thought that the title could switch. Granted, it was the right call to have Roman retain the belt since he’s doing the best work of his career, but there wasn’t necessarily much drama around the results. Overall, I would say that night two was the better show, but as a whole, Wrestlemania 37 was an entertaining event and it will be interesting to see the direction of the product in the next few months.