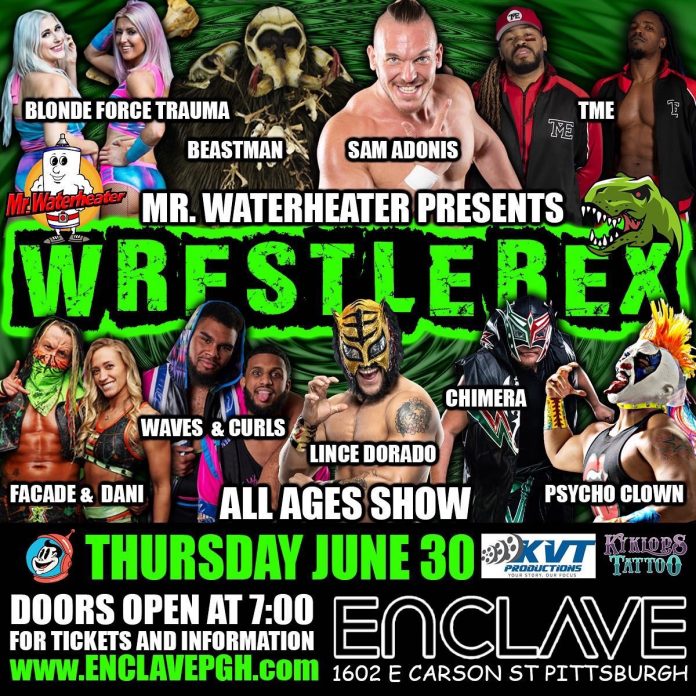 In the modern day landscape of professional wrestling, particularly with the easier access to content through current technology, there’s more exposure to more types of sports entertainment than any other time in history. Not only are there diverse options on television, with an alphabet soup of different initials that cater to different audiences, there are also almost instant ways to consume alternative content as well. Waiting for a few weeks to get clunky VHS tapes in the mail to watch grappling from another country was replaced with literally a push of a button to enjoy international athletes.

So, it’s much more difficult now to produce wrestling content that will standout from the pack.

However, that’s exactly what 32-year-old international wrestler, Sam Adonis has offered with his Wrestlerex project, a venture that takes the flare of lucha libre, the drama of the sport in America, and the atmosphere of a rock concert to obtain a presentation that truly can’t be replicated anywhere else.

A Pittsburgh native, Adonis is a legitimate international star, working extensively in Mexico as a part of the AAA trios champions, as well as zigzagging across the United States in between international tours. He has also previously competed for All Japan and spent the early portion of his career learning the finer points of the craft in England. Sam wanted to bring all of those international aspects to his hometown, a place that nurtured his love for the sport that became his profession.

Adonis launched the Wrestlerex organization a few years ago, and the platform hosted such stellar talent as lucha legend LA Park, Gangrel, Pentagon, Rey Fenix, and others. Every few months, a fresh crop of headliners that aren’t often featured in the northeast would highlight the announcements for the next event. But, just as it affected the entire world, the COVID-19 pandemic shuttered live events and many venues couldn’t sustain themselves. Similar to so many entrepreneurial projects, Wrestlerex was thought to have been lost to the pandemic.

“Everyone was affected by the pandemic in so many ways. Wrestling was no different. We actually had a show planned for May of 2020 that we had to cancel. After the Rex Theater was forced to close for good, We honestly thought that Wrestlerex history. Fast forward a few months and we had heard the Rex had been sold,” Sam explained.

As it turned out, a friend of Sam’s family ended up with the rights to the building that was formerly the Rex Theater, renaming it The Enclave for a fresh start after such a rocky period for everyone during the pandemic. This revelation ultimately paved the way for Wrestlerex to return to the Pittsburgh area.

“It felt like fate. At that moment, I knew we had to come back. Too many people worked too hard to give up on such an amazing product. I felt an obligation to everyone who enjoyed WrestleRex. The fans in attendance, as well as the wrestlers and staff who made it happen,” Sam said enthusiastically.

With this Thursday’s card set to feature AAA star, Psycho Clown, former WWE star Lince Dorado, and some of Pittsburgh’s best talent, including The Mane Event of Ganon Jones Jr. and Duke Davis, as well as several others, Adonis finds himself in the unique position of a traveling talent, while organizing an event in his hometown.

“By far this has been the hardest event I’ve ever had to promote. Not only am I regularly out of town, I’m very often out of the country so I have had to cram seven days of a work into about four nights per week,” Adonis said just hours before he was headed to the airport for another trip to Mexico.

However, aside from his brother’s work at the announce desk as Corey Graves on Monday nights, Sam is from a wrestling family, as his father promoted independent cards around the Pittsburgh region for years previously. It wasn’t uncommon for his dad to greet wrestlers upon their arrival while his mom worked the ticket table before the doors opened for a live card in the past. A young Sam would set up chairs and hang poster, a foreshadowing of his eventual career inside the ring ropes. Despite the busy schedule, Sam cites that support and the team behind-the-scenes for the planning that went into the highly-anticipated event.

“Luckily we are a wrestling family and I know that they have the experience to make it work,” Sam commented.

So, Wrestlerex will make its return to the Pittsburgh area while it makes it’s debut at the new venue. International stars will land in the steel city to showcase a style not often seen around the area. Most of all, the event appears to be set to deliver a show to fans that won’t be experienced anywhere else than the Wrestlerex organization.

“I want Wrestlerex to be a genre of its own. We are not going to be a touring wrestling company. We don’t want to compete with anyone on TV or be ‘the next ECW.’ We use the highest quality independent and unsigned talent available, but we don’t aim for the wrestling crowd we aim for everyone. Any one and everyone is welcome to the events and I think there’s the perfect balance of wrestling, theater, art, and music to be enjoyed by all. The production setup alone is out of this world. I want people leaving not being able to compare it to anything else they’ve seen. The way I see it, we are not Indy wrestling. We are Wrestlerex,” Adonis concluded.