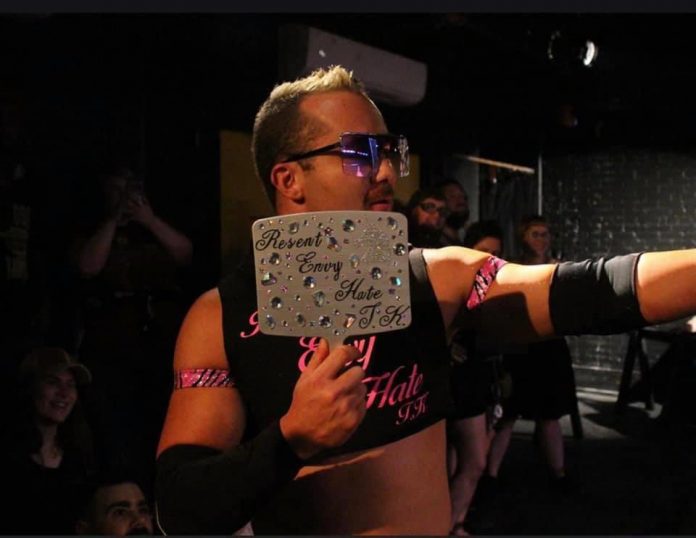 The world of entertainment is filled with characters from every dimension, universe, and background. It might be Batman, Don Corleone, or Steve Austin, but each of those dynamic personalities connected with the viewing audience. Many times, those within show business express that one of the thrills of the performance is the ability to pause any real-life hurdles and embrace the stage.

One such entertainer from the professional wrestling world is Tyler Klein, an independent grappler that brings a lot of unapologetic flare to the squared circle to compliment his solid set of in-ring technical skills. Known as “The Trophy Boy,” Klein, as his name implies, considers himself the sports’ upmost fashion designer, stitching together gear for his stablemates while also devising a plan to waffle someone with his book of newest designs.

As an openly gay athlete, Tyler uses the squared circle as a way to express himself while proving any naysayers wrong with any perceived stereotypes. When the bell rings, he always aims to showcase his natural athletic ability and the knack he has for rope opera.

“I think what had inspired me the most is I didn’t really excel in other sports. I was never the most driven when it came to soccer or baseball or any of the other sports I played. Due to the fact I was in the closet untill I was about 24, I had always wanted to do something that would let the inner me out. Conventional sports didn’t really allow me to do that when i was growing up,” Klein explained.

The industry that was built on Gorgeous George strutting to the ring with pins in his bleached blond hair and inhaling “imported Florida air” before the opening bell provided Tyler with a platform to create his own colorful display of sports. While swinging for the fences or going for a slam dunk didn’t resonate with him, he always enjoyed the dramatics of professional wresting throughout his youth, as he saw the larger-than-life personas beamed through his television screen. He didn’t realize how well he would take to the canvas when he began to practice maneuvers with friends that had already began their formal training, just a few weeks shy of his 30th birthday.

“I started wrestling very late. I wish honestly I had started sooner. It would of been great to start but back then i was always worried that me being gay would have some sort of impact on being allowed to train and I would have to hide it. When I kind of grew out of that fear and had a few friends who were wrestlers, I would go to their school’s open ring with them and learn a bit. One night, the head trainer was there and I was just messing around, and he stopped me to ask where I had trained before. I told him I was not professionally trained, I picked it up from friends I had done open rings with and he told me to come to the regular training session,” Klein commented.

While the ring ropes can provide an escape from some of the discontent of the world, Tyler was faced with the harsh reality of the closed-mindedness that can plague both inside an outside of professional wrestling. A native of Massachusetts, the same place where he broke into the industry, Tyler comes from a very religious background and wasn’t embraced at home.

“It was hard actually. We all want believe everyone gets a fairy tale story on coming out with all the love and acceptance, that’s not always the case. I came out when i was a senior in college after being closeted since I was probably a fresh man. My family is very conservative and religious to a bit of an extreme scale, but it wasn’t something that clicked with me. In reality, I came out when i was 23, but my family didn’t find out until I was at least 28. When I came out, it wasn’t pretty, it was the ‘what will people thing of us if you are gay’ and it was four years before my family and I even spoke. We still don’t have a great relationship,” Tyler explained.

Despite it’s reputation as a more progressive area of the country, the New England region wasn’t too kind to Tyler either. With his debut within about a year of his formal training because of he quickly he picked up the techniques, Klein was faced with varying levels of discrimination. It wasn’t uncommon for his rainbow gear to generate homophobic slurs hurled at him from the crowd. He also had scheduled matches cancelled when a promoter found out that his wrestling persona was reference to his real-life sexuality.

Finally, Tyler looked for a fresh start, not only in his wrestling career, but also in his life, opting to relocate to Pittsburgh, where he met one of his best friends, fellow grappler, Calvin Couture, a talented athlete that considers himself a fashion model when he’s not pummeling opponents. The designer and fashion guru made for a natural tag team, competing around the tri-state area as “The Runway.” Their glitz and glamour reaches beyond the tag team division as the two are a part of Golden Chic International, a group led by BC Steele, widely considered the best manager in the area, at Ryse Wrestling, one of the fastest rising organizations in the Pittsburgh independent scene.

“I’m very excited to see what the future holds for Tyler Klein. He has the foundation and tools to be something very special. I’m thankful and excited to be a part of that,” BC said.

The move to the steel city allowed Tyler to realize a sense of reassurance and self-awareness, as the wrestling community embraced him, not only for the skills he brings to the table in the ring, but the positivity he brings behind-the-scenes as well. The awareness he continues to raise about equality and acceptance have also earned him praise from his peers.

“I have learned to be more outgoing and expressive. Ive gained a lot of confidence in my self and just kind of of been able to really grow as a person. Its nice to be confident in my normal life so it has made me think of being more vocal for things I want to bring a positive change to wrestling and promote LGBTQ awareness. I want to break the stereotype of a gay wrestler. Too many times people think that we have to wrestle girls or act effeminate and that’s not who I am. I want to be known for my ability to entertain,” Tyler remarked.

“I’ve always been a person that felt like a background character, and part of why I got into wrestling was to change that. As a bisexual woman, I’ve had trouble connecting with my peers since I could “pass” as a straight woman. With the wrestling community opening up and flourishing at the hands of so many openly LGBT wrestlers, its really given me hope and made me a lot less scared to be proud of who I am. I feel like there’s room for me to flourish alongside of everyone else with my pride flag in hand,” said Tatiana Rose, a young performer that began her journey into the industry less than two years ago.

So, similar to the way that Michael K. Williams’ epic portrayal of Omar Little on HBO’s street saga, The Wire quite literally blasted away perceived stereotypes of a gay character, Tyler Klein body slams the notion that a performer should limited themselves based on an audience’s misinformed notions. Perhaps, the most striking aspect to Tyler Klein’s story is that he found himself through professional wrestler and inspired his peers to do the same through their own performances in the industry.