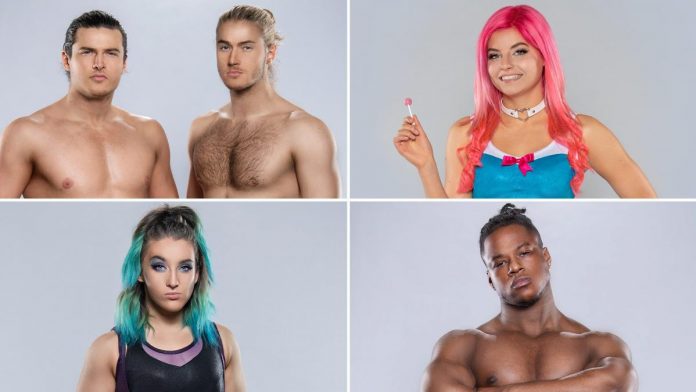 It was announced today that Candy Floss, Levi Muir, Dani Luna and the tag team of Pretty Deadly (Sam Stoker, Lewis Howley) have been officially added to the NXT UK roster. They are now training at the WWE UK Performance Center in North London. Floss and Pretty Deadly have had somewhat regular enhancement talent roles with the brand over the past year or so.

Below is WWE’s full announcement on the new signings:

Pretty Deadly, the confident tag team of Sam Stoker & Lewis Howley, have impressed in recent showings on NXT UK television, taking on the likes of The Hunt and Kenny Williams & Amir Jordan.

Sugary sweet 20-year-old grappler Candy Floss has plenty of experience across Europe and Japan. In her previous sojourns on NXT UK, the pink-haired Superstar has battled competitors like Rhea Ripley, Kay Lee Ray and Toni Storm.

Levi Muir is a British powerlifting champion-turned-Superstar with plenty of in-ring experience in the UK, including promotions like PROGRESS.

Camden native Dani Luna comes to NXT UK with several years of in-ring experience across the United Kingdom in promotions like PROGRESS, and has crossed paths with the likes of Ripley, Storm, Nina Samuels, Piper Niven and Meiko Satomura.

Stay tuned for these new signees when NXT UK streams every Thursday at 3 ET/8 GMT on the award-winning WWE Network!