– Dave Meltzer of F4WOnline.com is reporting that there was a backstage meeting prior to the Money in the Bank PPV with talent headed by Stephanie McMahon. Meltzer noted that Stephanie directly addressed AEW as their competition. Meltzer wrote, “They were pushing the WWE brand hard, the same social media and YouTube stats they always talk about with the idea of having 1 billion followers (adding every form of social media for every performer related to the company), and then said that they are having to compete with video games, movies, other streaming services as well as now AEW.”

– As previously noted, Impact Wrestling had reportedly been “scrambling” to sign Jordynne Grace to a contract. Grace wrote on Twitter that she will “officially” be staying with Impact and wrote, “Exposure and money are absolutely worthless if you aren’t happy. I’ll never apologize for putting my contentment first.” 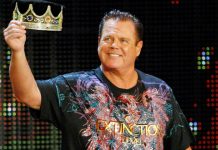 Jerry “The King” Lawler Hospitalized After Having a “Serious Medical Episode”