Bruce Prichard is returning full-time to WWE and will be working in a top position with the creative team, according to PWInsider.com. Prichard’s position is said to be “as important as possible.” Prichard is expected to have a similar position to what his former role was where he worked directly with Vince McMahon on the creative process. Prichard, who appeared on television as the Brother Love character, worked behind-the-scenes with WWE for over 20 years.

Prichard, who left WWE back in 2008, will reportedly be starting back with the company this coming Monday night. 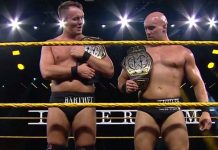