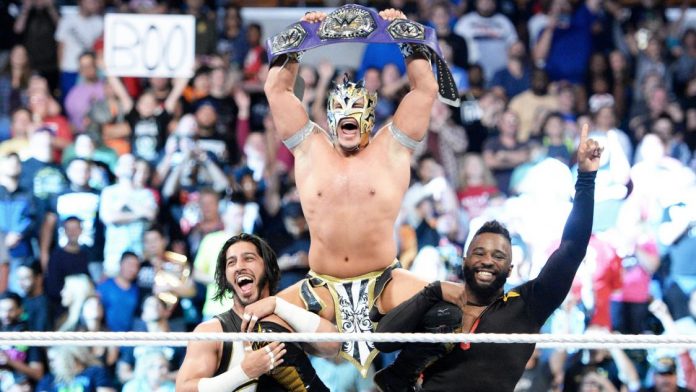 – As seen above, Xavier Woods has received his YouTube Gold Play Button award for hitting 1 million subscribers on the “UpUpDownDown” YouTube channel, a milestone he hit a while back. The channel launched in March 2015 and currently has 1,242,388 subscribers with 138,017,170 video views.

– The original plan for last night’s RAW main event had WWE Cruiserweight Champion Enzo Amore defending against Neville, according to PWInsider. No word yet on when the match was changed to new champion Kalisto but WWE announced Kalisto vs. Enzo for the TLC pay-per-view shortly before RAW hit the air. It appears Enzo’s rematch will take place at TLC on October 22nd.

– Below is another clip of AJ Styles talking about Shane McMahon, Kevin Owens and Sami Zayn with Renee Young and Peter Rosenberg on the post-Hell In a Cell edition of Talking Smack. We noted before that AJ said he hopes the SmackDown Commissioner recovers quickly so he can get revenge on Sami. AJ also offered to help fight Sami and Owens. He said:

“I hope that Shane recovers quickly, that fall was crazy, so he can beat the crap out of Sami Zayn. If he needs help, I’ll be here. I’m not saying Shane and I are the best of friends but I sure did enjoy him beating the crap out of Kevin Owens and he wasn’t done, then Sami Zayn got involved. It pisses me off.”