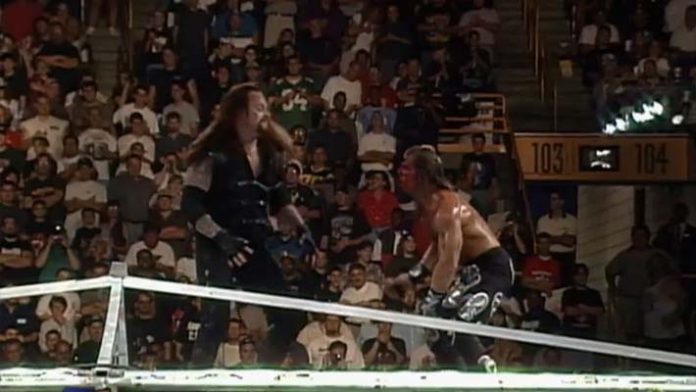 One of the most historic matches. The first ever Hell in a Cell match was contested at Badd Blood 1997. Shawn Michaels vs The Undertaker started their feud after Summerslam 97′. This match also had the debut of Kane. Arguably the best debut ever in wrestling.

It all came about over the WWF title that was being contested in a match between Bret Hart and The Undertaker. Shawn Michaels being the special referee. With the Shawn and Bret rivalry heating up even more. Michaels swung a steel chair at Bret, who ducked the chair shot. He ended up hitting the Undertaker instead. With the damage done, Michaels was forced to count and cost the Undertaker the world title.

This set up a Michaels heel turn. Which is where the beginnings of DX were born. Michaels later recruited HHH, Chyna and Rick Rude. With the match scheduled for Ground Zero, revenge may have been at hand for The Undertaker. The two men couldn’t be contained however, thus a new stipulation was born. Hell in a Cell.

The start of the match was very cool, with the Undertaker stalking Michaels as he tried to escape Undertaker.

Undertaker took the control early on with the match taking a very methodical pace. Undertaker using the cell to his advantage while Michaels still attempting to escape at times. But there was no where to run.

Michaels managed to gain the upper hand after the Undertaker tried to send him into the cell, and Michaels came back and took him down.

Soon after, he shot through the ropes with a suicide dive into the Undertaker going the cell wall.

Michaels had taken out a camera man inside the cell. This lead Sgt Slaughter to open the cage door to get him out. While this was happening Michaels had hit sweet chin music on the Undertaker, who sat up almost immediately after. Michaels then tried to rush out of the cage with the door still open as the undertaker chased him out.

This lead to them fighting on the outside. Taker sling-shot Michaels into the cage, Michaels started bleeding from that.

These guys are now on top of the cell which is where Shawn gets back body dropped on top and body-slammed as well. In which the visual of this is amazing. With the cage seeming like it’s on the edge of breaking.

Michaels then tried to escape down the other side of the cell, taker caught him and sent him halfway down the cell crashing through the announce table.

They go back into the cell in which the Undertaker takes full control once more, choke-slamming Michaels off the top turnbuckle.

Taker then slams Michaels head with a steel chair. Undertaker signalled for the tombstone. Until the lights go out and music starts playing, we see Kane for the first time and the infamous call, “thats gotta be kane”, rips the door off its hinges, gets in the ring.
All while the Undertaker is shocked. Kane then delivers a tombstone of his own to the Undertaker. Shawn Michaels gets the cover on Undertaker and wins the first ever hell in a cell match.

Obviously this led into Survivor Series 97′. The most infamous event in wrestling, The Montreal Screwjob. So Michaels won the title at that event and defended it in a casket match against The Undertaker at the Royal Rumble 1998 in a casket match. Michaels suffered a serious back injury during the match. However, did end up retaining the championship. He then lost it at Wrestlemania 14 to Stone Cold Steve Austin. Then went away for four and a half years to nurse the back problems but also get himself right.

The Undertaker meanwhile feuded with Kane over Wrestlemania 14. He also reinvented himself and formed the ministry of darkness in 98′ and 99′. While also changing into the American Badass going into the 2000s.

Both men wouldn’t really cross paths until the Royal Rumble in 2007. Where they were the final two and put on the best final two rumble match section in history.

Wrestlemania 25 & 26 they crossed paths again, this time for the streak. Arguably the greatest match in Wrestlemania history at 25. While 26 was Shawn Michaels retirement match. Michaels lost both times but in the process delivered two of the best matches in company history with The Undertaker.