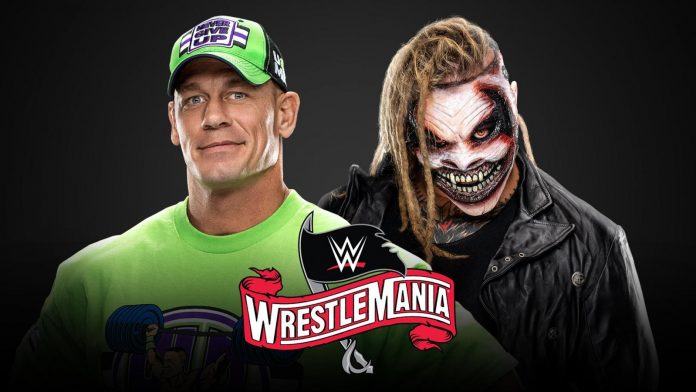 WWE has officially announced John Cena vs. “The Fiend” Bray Wyatt for WrestleMania 36.

One night after dropping the WWE Universal Title to WWE Hall of Famer Bill Goldberg, who will now defend against Roman Reigns on The Grandest Stage of Them All, Wyatt came out at the end of SmackDown on FOX this week and confronted Cena, who had just returned in front of his hometown crowd of Boston. Cena had previously spoke from the ring and announced that he would be skipping WrestleMania 36 this year because WrestleMania spots are earned, not given.

Cena made his exit and saluted the crowd on the stage, but The Fiend came out and confronted him at the entrance. The Fiend pointed to the WrestleMania 36 sign hanging high in the TD Garden, and Cena accepted by nodding at him and tipping his hat.

WWE then confirmed Cena vs. The Fiend after SmackDown went off the air. This will be Cena’s first match since the Fatal 4 Way back on the January 14, 2019 RAW. It will be his first singles match since he defeated King Baron Corbin at the December 26, 2018 WWE live event from Madison Square Garden.

WrestleMania 36 takes place in less than 35 days on April 5 from Raymond James Stadium in Tampa, FL. The Kickoff pre-show will begin at 5pm ET that day and will run for two hours.

Below is the updated announced card for WrestleMania 36, along with WWE’s announcement on Cena vs. The Fiend:

John Cena vs. The Fiend

At WrestleMania, it will be “you can’t see me” against the horror most Superstars hope you’ll never see. John Cena is set to return to The Showcase of the Immortals for what promises to be an incredible showdown against “The Fiend” Bray Wyatt.

The WWE Universe has witnessed Cena compete in a slew of classic WrestleMania matchups against some of the squared-circle’s most iconic Superstars, from The Undertaker to Triple H to Shawn Michaels to The Rock. But, just when it seemed as if the 16-time World Champion may have fought his final battle on The Grandest Stage of Them All, HE was there to pull him back in.

“The Fiend” Bray Wyatt emerged on the ramp and pointed to the WrestleMania sign, setting up the ultimate battle of good vs. evil at The Show of Shows. Save a single loss to Goldberg at WWE Super ShowDown, the monstrous competitor has been virtually unstoppable against some of the best WWE has to offer. But does he have what it takes to take down the likes of John Cena?

Time to answer question: What will @JohnCena be doing at #WrestleMania? 🤔🤔#SmackDown pic.twitter.com/NRbwQ8gbfv

"This year's #WrestleMania should go on WITHOUT @JohnCena."

Looks like @JohnCena won't be sitting out on @WrestleMania after all… #WrestleMania #TheFiend @WWEBrayWyatt #SmackDown pic.twitter.com/jTPhqfmIQO

After 221 days, the legendary @JohnCena has returned to WWE. #SmackDown pic.twitter.com/Uqll7JlOqR

"This year's @WrestleMania should go on without @JohnCena." 😱😱😱 #SmackDown pic.twitter.com/PUFoQIpR2I