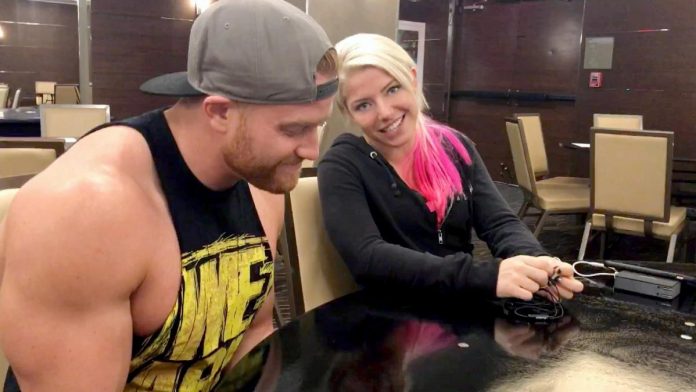 We can now confirm that Alexa Bliss and Buddy Murphy are no longer together.

Ryan Satin of Pro Wrestling Sheet took to Twitter today to address rumors that have been floating around of the WWE Superstars calling off their engagement. Satin was told by a person close to Bliss that the two ended their relationship last September.

Satin adds that “Bliss is still a huge fan of Murphy as both a wrestler and person.”

In regards to rumors of Alexa Bliss and Buddy Murphy calling off their engagement — a source close to Bliss confirms she & Murphy ended their relationship & have been living apart since Sept. ’18. FWIW, I’m told Bliss is still a huge fan of Murphy as both a wrestler and person.

Bliss and Murphy were together for a few years, dating back to their time in NXT. Bliss formed an alliance with Murphy (and Wesley Blake) in May 2015 and they began dating shortly thereafter.

The timeline of their breakup may be inaccurate since Murphy told Lilian Garcia in January on her Chasing Glory podcast that they were together. He mentioned that while it’s not ideal to be on different touring schedules, it’s just something they deal with.

They’ve been on different touring schedules for over a year, with Bliss on Raw and Murphy on 205 Live and now on SmackDown LIVE.

Murphy also said they help each other with their weaknesses in WWE.

“[Bliss] helped me how to speak,” Murphy told Garcia. “I try to help her in-ring and she helps me with character [work].”