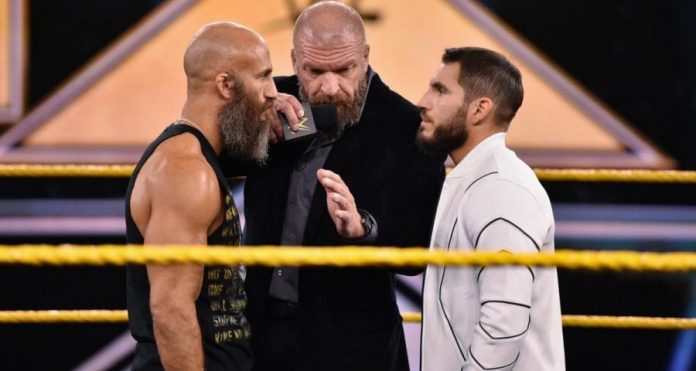 “Oh my God, I just feel so fortunate to be here right now,” LeRae said. “And an opportunity to be in a Ladder Match. Little Kid me is freaking out inside right now. This is the coolest thing. I couldn’t think of a better way to head into, like, becoming #1 contender, than reaching up and grabbing this huge briefcase, beating all the other women. I’m just… ahhh, I’m so excited, I’m so excited. This is amazing, right?”

LeRae was also asked about husband Johnny Gargano and his feud with Tommaso Ciampa. As noted, Triple H announced on Wednesday that the April 8 episode will also feature Ciampa vs. Gargano in an empty building, to finally end their feud. LeRae refused to take any questions about Ciampa vs. Gargano.

“I’m sorry, if you have more questions about me and my career, the NXT Women’s Championship, I have no problem answering all those questions,” LeRae told Quasto. “But Johnny and Tommaso’s stuff has effected me so negatively in the past, and I’d rather just focus on the Ladder Match right now. It’s way more important to me. So, I’m sorry but I’m not going to answer any questions about that.”

Quasto apologized to end the segment.

– Speaking of the April 8 Gargano vs. Ciampa match that will air on the USA Network, the storyline is that Triple H will text a location to both men, and they are to show up at the empty building. There will be a referee inside, and the winner of the fight will be the one to take the feud as this is to be the last match between the former DIY partners.

Triple H added that is they continue to fight after the battle on April 8, then they will both be gone from NXT. There’s no word yet on where the final chapter of Ciampa vs. Gargano was taped from, but stay tuned for updates.
Below is WWE’s announcement on the match:

Though Triple H felt that the final showdown between Tommaso Ciampa and Johnny Gargano deserved to take place on the biggest stage possible, the two best friends-turned-bitter rivals both agreed that all they needed to settle their score was a ring. So, Triple H is giving them what they want.

On the April 8 edition of NXT on USA Network, Triple H will give them an empty building with a ring inside and a referee. Two men will enter, and one will stand tall, determining who is the true heart and soul of NXT. But The Game made one thing clear: This is it. If they engage again following this battle, they will both be gone from NXT.

Who will be victorious in the final chapter of NXT’s most personal rivalry? Find out in two weeks on the April 8 edition of NXT at 8/7 C on USA Network!

For those who missed it, you can click here to see how Killer Kross interrupted the show-closing NXT segment with Triple H, Gargano and Ciampa.

– Gargano took to Twitter after NXT went off the air and commented on the final battle with his former friend and tag team partner.

Ciampa has not responded to Gargano’s tweet as of this writing, but he hasn’t tweeted since the night before the “Takeover: Portland” event on February 16. That is the event where Gargano turned on Ciampa and caused him to lose the title shot from NXT Champion Adam Cole. You can see Gargano’s full tweet below:

It was supposed to end last year but fate stepped in..

It was going to end this year but fate has stepped in yet again..

In 2 weeks I take it out of fate's hands.