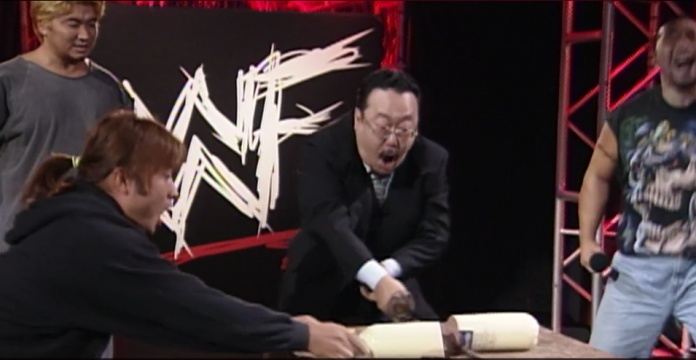 Wally Yamaguchi, who managed Kaientai during the “Attitude Era” under the name Yamaguchi-San, has passed away at the age of 60 years old.

The news was broken last night by his best friend, Jimmy Suzuki, who is the president of Tokyo Championship Wrestling.

Yamaguchi, whose real name was Yusuke “Wally” Yamaguchi, had been in poor health in recent years. According to Suzuki, Yamaguchi was bed-ridden for the past 28 months. He suffered a stroke “about one year” ago and also had heart issues.

Suzuki corrected himself to say that he was bed-ridden for two years and four months.

Yamaguchi actually suffered the stroke in December 2017. His brother mentioned it on Facebook and wrote, “Don’t know how long he has.”

WWE issued a statement today on his passing:

WWE is saddened to learn that Wally Yamaguchi, Japanese wrestling fixture and former Kaientai manager, has passed away at the age of 60.

Although primarily known to the WWE Universe as the villainous Yamaguchi-San during the late 1990s, Yamaguchi was a key figure in Japanese sports-entertainment during the 1980s, editing “Gong” Magazine and working with various Japanese promotions as a referee and an agent.

In addition to appearing onscreen as Kaientai’s manager, Yamaguchi also worked with WWE as its Japanese liaison. His brother, Shun Yamaguchi, is a Japanese television announcer for WWE’s pay-per-view broadcasts.

WWE extends its condolences to Yamaguchi’s family, friends and fans.

Kaientai was a stable made up of Japanese wrestlers Shiryu, Dick Togo and Mens Teioh, later joined by Funaki and Taka Michinoku. The group debuted on Raw on March 30, 1998, and Yamaguchi-San arrived a few weeks later as their manager. Kaientai was originally referred to by the announcers as Club Kamikaze, but Yamaguchi-San stated their name as Kaientai during his debut.

Their most infamous feud in WWE was with porn star character Val Venis. Yamaguchi was enraged when he was shown a pornographic video of his (on-screen) wife, sleeping with Venis, and threatened to punish both of them. Mrs. Yamaguchi-San was brought to the ring for what was going to be a spanking by Yamaguchi-san using a wooden paddle, but she was rescued by Venis. A week later, just as Venis had finished a match, Yamaguchi and Kaientai showed up with salami on a table. Yamaguchi proceeded to chop the salami while shouting at Venis, “I choppy choppy your pee pee!”

The following week on Raw, Venis teamed up with Michinoku to take on Togo and Funaki in a tag team match. Michinoku, however, turned against Venis and proclaimed that Mrs. Yamaguchi-San was his sister. Venis got dragged backstage by Kaientai to have his penis amputated, though the audience did not see what happened next since Raw went off the air. Venis returned the following week and explained that Yamaguchi’s sword narrowly missed his genitalia due to the lights being turned off by John Wayne Bobbitt. Venis then broke up his relationship with Mrs. Yamaguchi-San to end the feud.

Yamaguchi, Teioh, and Togo were all gone by early 1999. Michinoku and Funaki stuck around as they began wrestling together as a tag team in April 1999 using the name Kaientai.