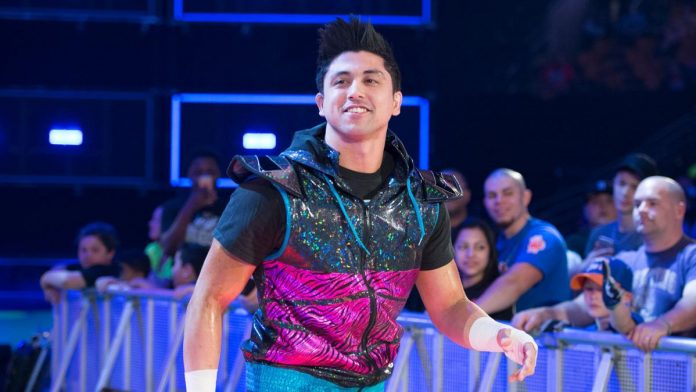 There is one less wrestler in WWE’s cruiserweight division as TJP is gone from the company.

WWE has come to terms on the release of Theodore Perkins (TJP).

TJP was released along with Hideo Itami and Tye Dillinger. Both Itami and Dillinger asked to be released, but this is not the case with TJP. Dave Meltzer said Saturday night on Wrestling Observer Radio (h/t Ringside News) that WWE fired TJP for disciplinary reasons because they “felt like they needed to.”

“This is one of the things with TJP, [WWE is] not firing anyone, that’s why the TJP firing surprised people, but TJP’s firing was for disciplinary reasons so it was a thing that they felt like they needed to do. So it wasn’t like cost cutting or creative has nothing for you so we’re gonna let you go. They’re not doing that, those people are being kept around, but TJP they fired because they felt they needed to.”

On Sunday, Meltzer shed some more light on the circumstances behind TJP’s sudden departure. Contrary to popular belief, it has nothing to do with cost-cutting, creative, standing in WWE, his performances or attitude.

In a thread on the F4Wonline.com message board regarding TJP’s release, a user by the name of mattwill9 wrote, “Considering that he’s talented, and got stuck in 205 live, and then wasn’t even being used despite the roster being only 12 people, I think a pretty bad attitude is understandable.” Meltzer replied, “It’s not attitude.”

When asked if TJP was released over “specific acts of insubordination,” Meltzer replied, “I’m trying to get specifics. But it’s non-wrestling business related.”

When a talent gets released from WWE over something non-wrestling related, it’s usually pretty bad. Meltzer should have more information on TJP’s release later this week.

TJP has a bad reputation behind-the-scenes, BodySlam.net was told by a source in WWE that TJP has historically been difficult to work with, not just amongst talent but even with those higher up in positions of power. TJP had been lobbying company officials for a bigger role on television.

The report also claims that TJP drew heat for not informing WWE higher-ups of his new tattoos. It’s an unspoken rule in WWE that talent must gain permission from management to make major changes to their appearance because of the many products WWE puts out, such as action figures and video games. Products featuring a talent’s revamped appearance often takes several months to a full year and the change can result in loss of revenue (e.g., fans not wanting to buy an action figure of a wrestler’s old look).

On the rumor that he upset WWE higher-ups over his tattoos, TJP said Vince McMahon give him permission to get them six months ago. TJP also said that McMahon thought “they were pretty cool.”

I mean, the boss thought they were pretty cool last Tuesday when we met ??‍♂️…and also when he gave me permission to get them 6 months ago. https://t.co/GmisNHFCph

Hey so there’s a lot of messages/tweets/texts/emails/calls for me right now and it’s a bit overwhelming. If I miss your message here I apologize. Many are expressing sadness, and thank you, but its ok. And those who hate me w/a passion, thank you too. Sincerely. Thx for watching.

There was nothing negative. I have been swinging for the fences quietly behind the curtain for a year and this was a “spread your wings” thing. Boss said he respected my effort and dilligence and it just didn’t fit what they wanted. It’s not my call, and I’m cool with it. https://t.co/91nKAc8Mpk

Thats just one thing I expressed. My goal was, and still is, to get back to representing Filipinos and give us what Eddie and Rey gave to Latino’s. I inquired about every position, top to bottom, on any card(RAW, SD, NXT, UK). It was never about one spot, it was about ANY spot. https://t.co/Qw5dmDIzCs

Thought about it several times but no I never believe in quitting. For months the mutual goal was to find a way for me to accomplish my goals on a bigger platform. Tuesday was the same. But inevitably that doesn’t fit into what they want to do. I’m only a cog in a big machine. https://t.co/86Fp4WYBKx

Hey it’s ok. The goal was never IC title. That was for Filipinos more than it was for me. My goal was to represent them in a way that would work there. It wasn’t a good fit for them. It’s ok, the show isn’t about me and I’m proud to keep that goal alive with whatever is next. https://t.co/MoUnbhhHMv

I appreciate that. It’s hard to get back in the cupboard when you’ve expressed how much you are outgrowing your place in it, but the space you need on another shelf is not there for you. It’s not my cupboard, and I am very grateful they made space for me to begin with. https://t.co/dicOV1LUcI

There’s nothing for me to be upset about. And i am very lucky to have been given a shot to play for that team. I’m very proud of my community and for better or worse would die on our sword every single time. What my culture means to me is worth it. https://t.co/KLt420VkU6