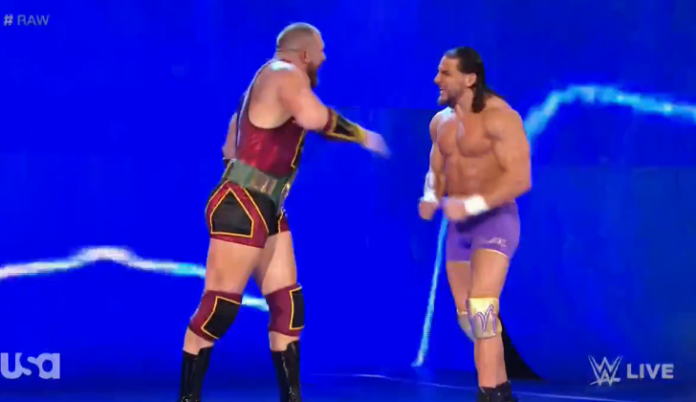 As noted, WWE NXT Superstar Riddick Moss made his RAW debut on last night’s episode from the AT&T Center in San Antonio, Texas. He came out with WWE 24/7 Champion Mojo Rawley as his “offensive lineman” sidekick. Mojo introduced Moss in the ring and issued a challenge, which was accepted by No Way Jose. Mojo ended up defeating Jose, but then lost the title to R-Truth out of nowhere. Moss then helped Mojo win the title right back. Moss also worked last night’s pre-RAW WWE Main Event tapings, against Cedric Alexander.

In an update, Moss is now an official member of the RAW roster on the WWE website. Moss, who does have a football background like Mojo, had been working in The Outliers tag team in NXT, with Dorian Mak (Dan Matha) and their manager, Robert Stone. There was speculation on WWE splitting the group up when Stone was put on NXT TV with Chelsea Green, her being the first member of The Robert Stone Brand stable. There’s no word yet on what WWE has planned for Mak moving forward.

Moss took to Twitter today to thank fans for helping him trend worldwide on Twitter. He also said he’s born to be on this WWE stage.

“Thank you to the fans for making Riddick Moss one of the most talked about debuts in history, trending number 6 in the world during #RAW,” Moss wrote. “Riddy Mo-nday Night. Or something. Idk we’ll figure it out. I was born to be on this stage.”

Regarding Moss being called up to the main roster, it was noted on Wrestling Observer Radio that the deal now is that NXT Superstars can be brought up at a moment’s notice if they are not currently on NXT TV. With that said, the idea is also that NXT Superstars cannot be brought up to RAW or SmackDown unless it’s OK’d with other officials, or it’s something temporary and not permanent, or unless it’s a call-up like Shayna Baszler, where it’s been planned in advance.

You can see tweets from Mojo and Riddick below, along with video from the segment:

Thank you to the fans for making Riddick Moss one of the most talked about debuts in history, trending number 6 in the world during #RAW

Riddy Mo-nday Night. Or something. Idk we’ll figure it out.

I was born to be on this stage. https://t.co/soDINKhCEL