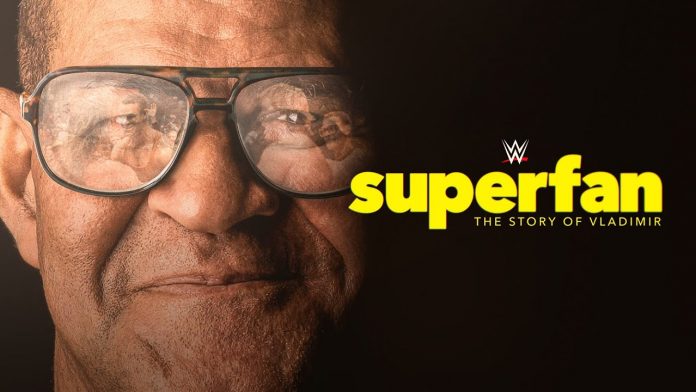 There are reportedly no plans to release WWE’s anticipated “Superfan: The Story of Vladimir” documentary, which was to tell the life story of Vladimir Abouzeide, one of the most dedicated and recognizable fans in WWE history.

As noted back during WrestleMania 37 Weekend, Vladimir appeared during Night 1 of WrestleMania 37 with Triple H and Stephanie McMahon to announce the documentary. They also named him the first-ever officially-certified WWE Superfan, and presented him with a plaque.

In an update, PWInsider reports that there are now zero current plans for the film to see the light of day. The Vladimir film was 100% post-produced completed but there’s no official word on why it’s not being released. PWInsider speculated that unless someone with major power within WWE makes a decree, the film won’t be seen anytime soon.

WWE has not had any communication with Vladimir in several months. The longtime pro wrestling fan, who still lives in New York City, has reportedly had some health issues as of late.

It was noted by PWInsider that if WWE does release the film in the near future, they’ll have to change the end of it because as of January 1, some of the ending will have been outdated. The film streamed for one week as a part of the Los Angeles Shorts documentary film festival earlier this year, and it received positive feedback.

WWE last promoted the documentary at the September 10 edition of SmackDown on FOX, featuring it during a promo for future WWE Network programming that ran in Madison Square Garden. The doc was not featured during promos at last night’s RAW from the Barclays Center in New York City.

WWE has shelved several projects in addition to the Superfan documentary, including the WWE Icons episode on Lex Luger, which was scheduled to air this past summer, and a documentary on WWE Hall of Famer Ric Flair, which was to look at his health issues from a few years back. There was also a Money In the Bank documentary being worked on, which has since been nixed.

There’s no word on if these projects will be brought back to life, but there appears to be zero rush from within WWE, based on what sources are saying. There had been talk of of WWE trying to spin off their original documentaries for additional revenue by licensing them to a third-party, potentially A&E, but there’s been no update on that front.

Stay tuned for more. For those who missed it, below is the trailer for the Vlad doc:

What better way to welcome back the @WWE Universe at #WrestleMania than naming Vladimir our first-ever officially-certified superfan!!!! @StephMcMahon pic.twitter.com/9xzRULlmy1

AEW PWMania.com Staff - 11/28/2021
During his podcast on PWTorchVIP.com, Wade Keller discussed the Young Bucks signing new AEW contracts and brought up how several other deals are reportedly...