We start off this week’s show with a look back at how Apollo Crews became the new number one contender for the NXT Championship held by Finn Balor.

We are in Winter Park, Florida and your announcers are Corey Graves, Rich Brennan, and Byron Saxton.

NIllie with a wrist lock and chin lock. Asuka with a kick from the mat followed by more kicks. Billie blocks a kick and connects with a forearm. Asuka smiles and Asuka rolls Billie into a cross arm breaker but Billie tries to roll through. Asuka with an arm bar submission. Asuka with a German suplex followed by a running kick to the head.

Asuka with the crossface chicken wing on Billie and she adds the body scissors and Billie taps out.

Rich brings up the battle royal from last week and the end of the Rhyno and Baron Corbin alliance. They will meet in the ring tonight.

We take a look at Baron Corbin with a video package.

Before our next match we get the usual entrance from Enzo Amore and Colin Cassady.

Enzo tells Cass that Halloween is right around the corner. Cassady says if you come to the ring with them in it, you are knocking on the wrong door. Enzo says you should have left your pillow in your pillow case because they ain’t handing out trick or treatin’, they are handing out beatings.

Colin spells a world for us.

Dawson with a modified Indian Death Lock and he is able to punch Enzo based on the position. Dawson with another spinning leg drop and he returns to the Indian Death Lock. Dawson rakes the eyes. Cassady comes into the ring to force Dawson to release the hold. Dawson knocks Cassady off the apron and then Enzo with an inside cradle for the three count.

They hit the flapjack into a Codebreaker on Cassady.

We go to commercial with a Rhyno video package.

We are back and Eva Marie is sending a message from Paris. She wanted to give everyone a present . . . her. She hopes they do not miss her because she misses Full Sail. She promises to be back soon.

Burch sends Storm to the apron and Storm with an enzuigiri. Storm returns to the ring and hits a neck breaker. Storm gets Burch up and he hits the Eight Second Ride for the three count.

We get comments from Apollo Crews, who will be facing Finn Balor in two weeks.

He says it takes guts to follow your dream. You can fall flat and fail and he is afraid of failing. Even though you dreamt it, it just doesn’t feel real when you get there. It is hard to explain his family. He is a first generation American. His father came to the United States in 1983 and he lived all over the place. He moved to Atlanta and then lived in Kenya and Uganda. He was living in Uganda while his sister lived in Atlanta with his mother. He would spend the summer in Atlanta and then go home.

He started watching wrestling with his father and he became addicted to it. He felt that they were reaching out to him. These people were larger than life. He was a fan of the Ultimate Warrior and he talked about Warrior’s energy. He says that he would ask for the replica title belts but money was tight when he was with his mom.

In tenth grade, he decided that he wanted to become a wrestler. He says that for him it was all WWE, but then he learned about the indies. He talked about driving all day for very little money. He was not going to be stopped doing this. He says that he does not want people to tell him that he was wrong to try. If you have a dream and you want to chase it, you can accomplish it. He came to NXT to be the best.

We are back with a Nia Jax video package.

We are told that there will be another part to the Apollo Crews story next week.

Royce with a double leg take down. Royce blocks a hip toss but Bliss is able to take Royce down and then she drives the arm into the mat. Bliss with a key lock. Royce gets back to her feet and she punches Alexa. Royce with a round kick and drop kick. Royce with a pair of kicks to Bliss followed by a jumping scissors kick.

Royce with an Irish whip and she runs into an elbow in the corner. Bliss with forearms to the back. Bliss sends Royce to the mat and then Bliss with a handspring double knee drop and then she goes up top for the Sparkle Splash and connects and gets the three count.

After the match, Alexa gets on the mic and she congratulates Bayley for accomplishing so much with so little. You are a role model and inspiration, but that is about to stop. Alexa says that she is everything that people strive to be. She was made to be NXT Women’s Champion.

We are back and we are told that next week, Tyler Breeze will face Samoa Joe.

Rhyno follows after Corbin and punches and chops him. They return to the ring and Rhyno punches Corbin. Rhyno with more forearms and he punches Corbin against the ropes. Corbin goes to the floor after being Irish whipped. Rhyno follows after Corbin and Corbin punches Rhyno. Corbin with a knee to the midsection but Rhyno with a forearm to the chest and then the back. Corbin with a knee and then he sends Rhyno into the ring steps.

Corbin returns to the ring and so does Rhyno to stop the count. Corbin kicks Rhyno in the corner.

Corbin chokes Rhyno in the ropes. Corbin slides to the floor but he misses a punch. Corbin with knees to Rhyno but Rhyno sends Corbin into the ring steps. Rhyno with clotheslines and a shoulder in the corner followed by a belly-to-belly suplex for a near fall. Corbin punches Rhyno and Rhyno sends Corbin to the corner when Corbin misses a charge after an Irish whip. Rhyno with a spinebuster for a near fall.

Samoa Joe is in the back and he says desperation is a very funny thing. Tyler Breeze, you are the epitome of desperation. You had your shot at the NXT Championship in that battle royal, but I eliminated you. You got desperate and cost him his rightful shot. You pulled out your selfie stick and had the audacity to call me out. Joe tells Tyler to pull out that selfie stick and look the very best you can and take that picture. Next week, when I get my hands on you, will never look the same again. 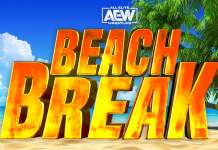 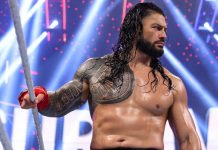