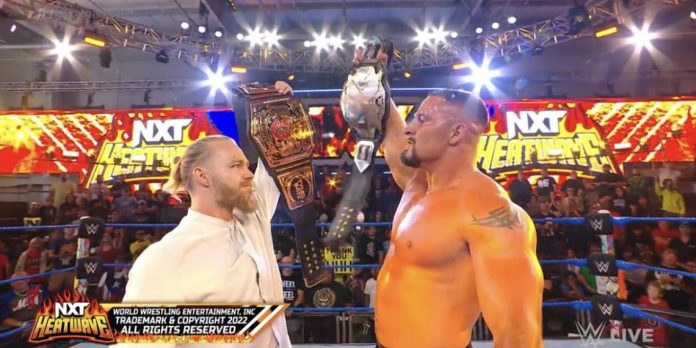 The main NXT 2.0 brand has been invaded by the WWE NXT UK brand.

Recently, it was revealed that there was a great deal of unease within the NXT UK brand as a result of the cancellation of two TV tapings this past week and the lack of any upcoming tapings in London. In Tuesday night’s NXT Heatwave special, the NXT UK Superstars made a significant impact by making several appearances.

The NXT UK invasion started when The Diamond Mine was in the ring and Roderick Strong was discussing the current problems between himself and the NXT Tag Team Champions, The Creed Brothers. Then Gallus’ Wolfgang, Joe, and Mark Coffey charged the ring and defeated The Diamond Mine. A green light filled the WWE Performance Center arena as Gallus defeated Strong, The Creed Brothers, and Damon Kemp before standing tall over them.

Later, as McKenzie Mitchell was conducting a backstage interview with NXT UK Tag Team Champions Brooks Jensen and Josh Briggs, Gallus made another appearance. Although Briggs and Jensen are NXT 2.0 Superstars, they went to London where they won the vacant NXT UK titles. Following the attack last week, they discussed exacting revenge on Pretty Deadly and Lash Legend, but Gallus quickly interrupted and had to be restrained by security. Gallus confronted Briggs and Jensen about the NXT UK Tag Team Titles, saying they will turn NXT 2.0 upside down because Gallus will be on top, and they would return the titles to the UK. The two teams then squared off, but security stopped them, and a match was scheduled for the next week.

Then, during another backstage scene, Blair Davenport of NXT UK appeared. Indi Hartwell was speaking with NXT Women’s Tag Team Champions Katana Chance and Kayden Carter, congratulating them on their titles. Indi was given a drawing by a staff member that appeared to come from her former husband Dexter Lumis, who had made mysterious RAW appearances recently. Indi was excited with the gift, but Davenport suddenly emerged and took the drawing from her hands. Indi then questioned Davenport who she thinks she is, to which the wrestler formerly known as Bea Priestley responded by introducing herself as Blair Davenport and threatening to become the next NXT Women’s Champion. Davenport walked away, ripping up Indi’s drawing.

Finally, after the NXT Heatwave main event, which saw Bron Breakker retain the NXT Title over JD McDonagh, the biggest angle of the night emerged. Following the match, Breakker stood up and began his celebration until the music stopped and NXT UK Champion Tyler Bate emerged. As a baffled Breakker looked on, Bate entered the ring. Bate then squared off against Breakker in the ring, with both Superstars raising their title belts in the air as fans roared and booed. NXT Heatwave ended with a shot of Bate and Breakker holding both NXT title titles.

It’s worth noting that Bate has yet to win the NXT UK Title on television. Due to a significant ankle injury sustained the week before against Wolfgang, Ilja Dragunov was forced to forfeit the title on the August 4 NXT UK broadcast. A tournament was then held to determine a new champion. The tournament was fully taped, and Bate defeated old tag team partner Trent Seven in the finals to win the vacant NXT UK Title, but the match has yet to air. WWE appears to have had Bate come out with the title for the sake of the match with Breakker.

Charlie Dempsey was also taken to Orlando, Florida, along with Gallus, it was reported earlier this week. Dempsey, William Regal’s son, did not appear on this week’s show.

There is no news on where WWE is going with this potential NXT UK vs. NXT 2.0 storyline, but it will be interesting to see how things play out, especially since NXT UK’s status is unknown. There has already been rumors of a Worlds Collide 2022 event taking place in the near future, although this has yet to be confirmed.

After NXT Heatwave went off the air, Bate gave a warning to Breakker, as shown in the Instagram video below.

Is that letter from who we think it's from??!?!