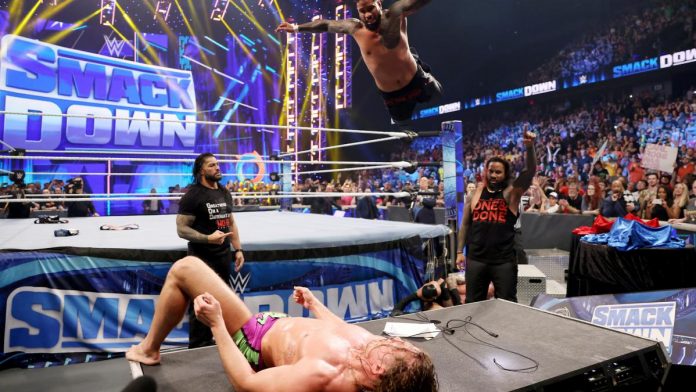 WWE has noted that Riddle has a bruised hip and lower back as a consequence of an attack by The Bloodline following SmackDown’s Tag Team Title Unification Match, and he and Randy Orton are both getting medical evaluations.

As PWMania.com previously reported, Jimmy and Jey Uso defeated Randy Orton and Riddle in the main event of this week’s edition of WWE SmackDown to become the Unified WWE Tag Team Champions. Undisputed WWE Universal Champion Roman Reigns interfered in the finish, assisting Jey Uso in taking out Riddle as they were fighting on the top turnbuckle. Paul Heyman had been on commentary and ended up getting involved.

These are most likely injury updates for their storyline, but WWE might use the post-match attack to keep RK-Bro off the air for a few weeks. It’s worth noting that they’re both scheduled to appear on Monday’s RAW, but things could change during the weekend.

There’s no indication on what WWE has planned for The Bloodline vs. RK-Bro next, but as PWMania.com reported on Friday, there are big summer matches planned. Reigns will reportedly face Riddle at Money In the Bank on July 2 in Las Vegas, then Orton at SummerSlam on July 30 in Nashville, and Drew McIntyre at Clash at The Castle on September 3 in Cardiff, Wales, according to sources.

McIntyre was not present at this week’s SmackDown as he is in the United Kingdom doing media for WWE Clash at The Castle. McIntyre will return to SmackDown on next Friday, according to the announcers.

You can watch highlights from SmackDown’s big title match main event and the post-match attack.