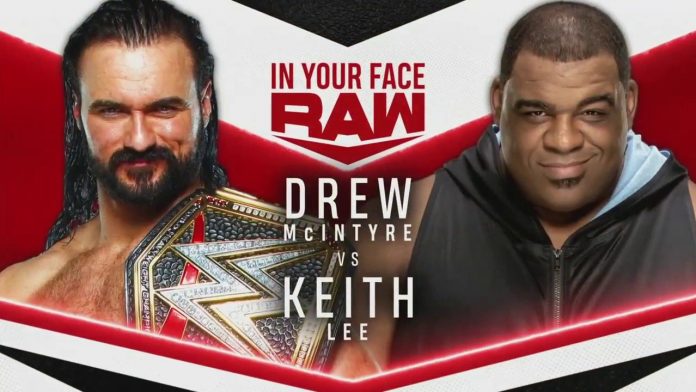 Monday’s live “In Your Face” edition of WWE RAW, featuring WWE Champion Drew McIntyre vs. Keith Lee in the non-title main event, drew an average of 1.689 million viewers on the USA Network, according to Showbuzz Daily. This is down from last week’s 1.725 million viewers for the Labor Day episode, and the lowest viewership since WWE ThunderDome was introduced.

RAW ranked #27 for the night in viewership on cable, behind the NFL on ESPN game between the Steelers and the Giants at 7:08pm, the NFL game on ESPN between the Titans and the Broncos at 10:12pm, Monday Night Kickoff on ESPN, SportsCenter at 12am, Tucker Carlson Tonight, Hannity, The Ingraham Angle, The Five, Special Report, Rachel Maddow Show, The Story, FOX News at Night, Your World, Outnumbered, Last Word, Outnumbered Overtime, Deadline: White House, FOX & Friends, 11th Hour, Bill Hemmer Reports, All In, America’s Newsroom at 9am, Daily Briefing, Reidout, America’s Newsroom at 10am, and Beat. WWE ranked #5 for the night on the Cable Top 150, for the second week in a row, with an average 18-49 demographic rating of 0.50. The NFL game between the Steelers and the Giants the topped the night on the Cable Top 150, with a 3.62 rating in the key 18-49 demographic. The game also topped the night on cable in viewership with 10.762 million viewers.