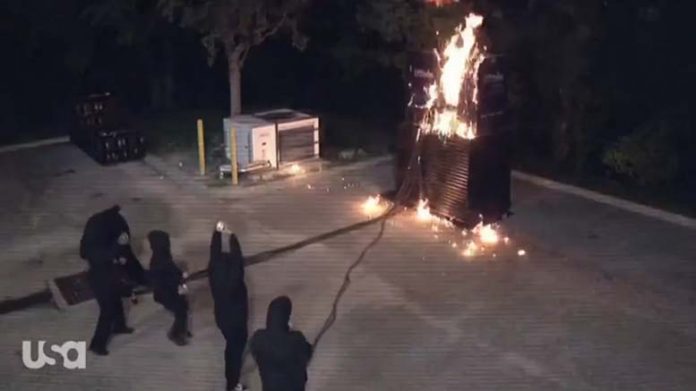 WWE has revealed the name of the new stable that debuted in a brief segment on last night’s RAW. The group will be called RETRIBUTION.

As PWMania.com previously reported, last night’s RAW featured a quick surveillance camera segment that had footage of a small group of men and women approaching an electrical transformer in the parking lot of the WWE Performance Center. The group was wearing all black attire with hoodies on, and was shown yelling and cheering as they threw fire bombs or Molotov cocktails at the piece of electrical equipment. They continued to cheer as the electrical equipment caught fire, and then ran off into the night.

WWE issued an announcement this afternoon and confirmed that RETRIBUTION was to blame for the various technical difficulties seen during last night’s RAW broadcast. WWE’s announcement noted that little is known about the new faction, but that their sole motivation seems to be causing chaos in WWE.

The initial reaction among fans on social media was that the group may be inspired by Antifa. However, it was reported by Pro Wrestling Sheet on Monday that the group is not political, and that the storyline is specific to WWE, not current happenings in the country. The idea behind the new stable is that they will use any means necessary to get the attention of WWE officials, and that they are trying to “loosen control” over WWE Superstars and change the way the company operates. It was also reported that the members of the stable are being kept close to the vest by top WWE officials, and would not be immediately revealed. There has been some fan speculation that we may see RETRIBUTION on both RAW and SmackDown, but WWE’s announcement indicates that this will be a red brand storyline only. That could always change.

Chaos reigned on Monday night’s edition of Raw, and we now know the name of the group behind it.

The lights were cut out at several points during the show, including the United States Championship Match between Apollo Crews and MVP, as well as audio issues leading to microphone trouble for several Superstars throughout the night. Many thought the technical glitches were due to a storm in the area, but security footage revealed later in the night would reveal a different story.

WWE.com has learned that the faction behind the attack is calling themselves RETRIBUTION.

Little else is known about RETRIBUTION, aside from the fact that causing chaos seems to be their sole motivation.

Just who is RETRIBUTION, and what is their ultimate goal? Find out by tuning into Raw, every Monday at 8/7 C on USA Network!