We’re counting down to the Royal Rumble: a variation of the traditional Battle Royal match, with a total of 30 competitors. Two WWE Superstars start in the ring, every 90 seconds thereafter another Superstar enters. A Superstar is eliminated when they’re thrown over the top rope and both feet touch the floor. The last remaining Superstar is guaranteed a championship opportunity at WrestleMania versus the current WWE World Heavyweight Champion.

Is Daniel Bryan the favorite to win the Royal Rumble match? YES!

Is he physically and mentally capable of out-lasting 29 other WWE Superstars? YES!

Is Daniel Bryan the hottest Superstar in the WWE today? YES!

Seriously, Bryan has found himself interwoven in WWE’s main angles and storylines for some time now. Mistreated by The Authority – Triple H and Stephanie McMahon, Bryan has been fighting a treacherous uphill battle. All his efforts valiant, the Washington native “Yes” man will not rest until he exacts revenge while claiming the WWE World Heavyweight title.

What do you think? 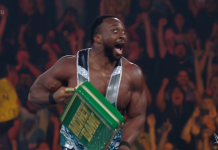