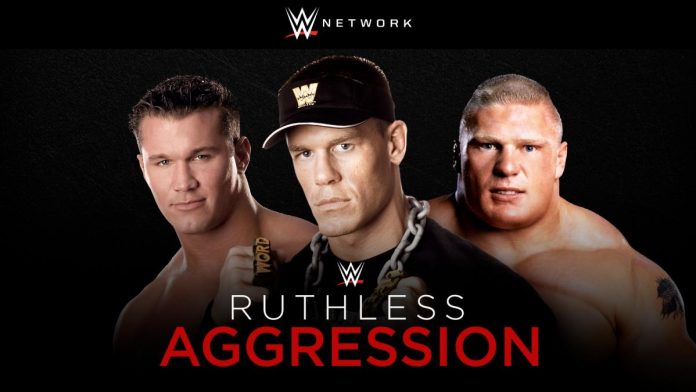 As noted, WWE’s new docuseries on the Ruthless Aggression era will premiere this Sunday, February 16 at 10am ET. Above is the trailer for the series.

WWE has revealed that new episodes of the series will be released on Mondays at 10am ET on the WWE Network on-demand section, beginning on February 17.

Below is WWE’s full announcement on the docuseries:

The Ruthless Aggression Era, one of the most transformative periods in WWE history, is the subject of a new original docuseries coming soon to WWE Network.

Famous for giving rise to legendary WWE Superstars like John Cena, Brock Lesnar, Randy Orton and Batista, the Ruthless Aggression Era was also a time of remarkable innovation for WWE. The company introduced new concepts like the Elimination Chamber Match and Money in the Bank Ladder Match, and, for the first time in its history, split the roster into two unique brands: Raw and SmackDown.

Check out the descriptions and premiere dates of the first five WWE Ruthless Aggression episodes below.

The series is FREE for new WWE Network subscribers.

Episode 1 – It’s Time To Shake Things Up
Available Sunday, Feb. 16 at 10 a.m. ET
As The Monday Night War comes to a close, WWE reckons with the challenges that arise from its acquisition of WCW and the departure of established Superstars like “Stone Cold” Steve Austin and The Rock, as well as makes the bold decision to split its roster between two brands.

Episode 2 – Enter John Cena
Available Monday, Feb. 17 at 10 a.m. ET
A new, if polarizing, Superstar emerges in the form of John Cena. After enjoying initial success, Cena struggles to find himself as a performer and realizes he’s on on the brink of being fired — that is, until his adoption of new persona launches him to new heights.

Episode 3 – Evolution
Available Monday, Feb. 24 at 10 a.m. ET
No faction ruled the Ruthless Aggression Era more than Evolution, the dominant union of Triple H, “Nature Boy” Ric Flair, Randy Orton and Batista. Find out what brought the four legends together and, for the first time ever, learn about the obstacles that threatened to derail Evolution from the start.

Episode 4 – The Next Big Thing
Available Monday, March 2 at 10 a.m. ET
Follow Brock Lesnar’s meteoric rise in WWE and get the full story behind his controversial and headline-making decision to abruptly leave in 2004 — at arguably the pinnacle of his young career — to pursue endeavors outside sports-entertainment.

Episode 5 – Civil War: Raw vs. SmackDown
Available Monday, March 9 at 10 a.m. ET
Go in depth on WWE’s groundbreaking decision to split its roster between two brands, Raw and SmackDown, from the myriad behind-the-scenes challenges, to the intense competition that erupted between the brands and their Superstars.