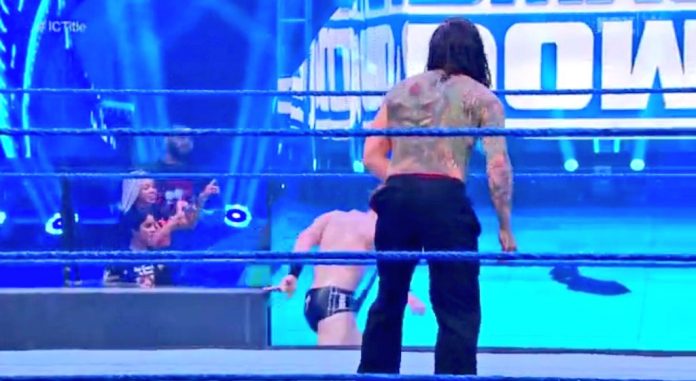 As reported before, this week’s WWE SmackDown on FOX opened up with an angle that saw an apparently intoxicated Jeff Hardy crash his car outside of the WWE Performance Center in Orlando, injuring Elias. The segment ended with Elias being taken away in an ambulance, while Hardy was arrested and taken away in a police car. Hardy and Elias were then pulled from their Intercontinental Title tournament match against AJ Styles and Daniel Bryan, which led to Sheamus winning a Battle Royal to earn a semifinals tournament match against Bryan. Bryan won that main event, after Hardy returned to the building to distract Sheamus, and Bryan will now face AJ on the June 12 SmackDown for the vacant WWE Intercontinental Title. There was a lot of speculation on the controversial storyline as SmackDown went off the air with Hardy celebrating in the middle of the ring after attacking Sheamus and forcing him to retreat. Hardy appeared to be just fine and was celebrating like he usually would.

WWE issued a “breaking news” storyline update after SmackDown and noted that Hardy was released from Orlando Police custody because he passed the required sobriety tests. Hardy was then absolved of the original charges from the storyline, which were public intoxication, driving under the influence, and the hit-and-run on Elias. It’s interesting to note that WWE chose to charge Hardy with public intoxication and DUI as these are the most recent charges he’s been hit with in real-life after two separate incidents in 2019 while he was on the shelf with an injury. WWE has received a lot of backlash from fans on social media over the segment that opened this week’s SmackDown.

Breaking news on the status of Jeff Hardy

WWE Digital has learned Jeff Hardy was released from custody by the Orlando police after successfully passing the required sobriety tests, therefore absolving Hardy of the charges of public intoxication, driving under the influence, and the hit-and-run on Elias earlier tonight.

Elias was found injured in the parking lot with an abandoned car nearby before Friday Night SmackDown began. Hardy was taken into custody after being found in a dazed state not far from the scene, but he reemerged as Sheamus battled Daniel Bryan in the night’s final match.

Stay tuned to WWE social and digital channels for the latest updates on the developing situation.