Triple H kicks off the show and talks about the reunion of Evolution. He talks trash about The Shield and announces the blockbuster match for Extreme Rules of Shield vs Evolution.

Big E pushes Del Rio into the corner in the early going. Del Rio with some kicks to the back of the head. Del Rio with a double front kick to Big E. Del Rio throws Big E into the ring post and hits a DDT. Del Rio jumps off the ropes and Big E catches him and hits a backbreaker. Big splash from Big E. Backstabber from Del Rio. Del Rio sets up and tries to lock in the armbar. Big E gets the ropes but Del Rio doesn’t break the hold and leads to a DQ.

Paul Heyman makes his way to the ring and talks about Brock Lesnar breaking the streak. Not much substance in this promo but it got the crowd riled up.

We get a video package of AJ vs Paige before the match.

Aksana beats down Paige in the early going, rubbing her face into the mat. Aksana applies a chinlock. Paige fights back as they each hit each other with a crossbody. Knees from Paige to Aksana. Paige with a chain of clothesline. Paige locks in her submission and Aksana taps.

Rusev dominates Truth for the majority of the match. Sidewalk slam from Rusev. Rusev locks in the Accolade and Truth taps.

Rusev doesn’t break the hold and destroys Xavier Woods after the match.

Sheamus and Batista trade strikes in the early going. Lots of physicality here. Sheamus with a clothesline and tosses Batista into the corner. Sheamus keeps his composure and hits another clothesline. Batista takes control after a commercial break. Dropkick to the knee of Sheamus, sending him into the middle turnbuckle. Batista continues the beatdown until Sheamus dodges Batista and sends him into the ring post. Sheamus with some strikes to the head. Knee to the head and a dive into the corner from Sheamus. Sheamus clubs Batista in the chest a dozen times or so. Battering ram from Sheamus. Batista with an elbow but Sheamus hits the Irish Curse. Sheamus misses the Brogue Kick followed by a pear from Batista for two. Batista goes for a Batista Bomb and Sheamus dodges. Sheamus goes up top but Batista knocks him off and hits the Batista Bomb for the win. 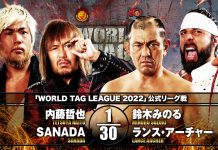 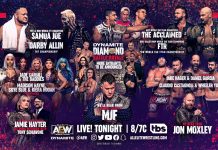