Start off the show with Sandow & Rhodes in a rematch against Orton and Sheamus. Sandow claims that they were not physically or mentally ready for the match on Monday.

Sheamus starts off in control early, hitting Sandow with the clubs across the chest. After a short period, Sandow and Rhodes take control of Sheamus and corner him. Sheamus with the hot tag to Orton who manhandles Rhodes. Middle rope DDT from Orton after the clotheslines and powerslam. Brogue Kick to Sandow from Sheamus. RKO to Rhodes and Orton/Sheamus get the win.

After the match, The Shield cuts an epic promo on them. Hyping up Wrestlemania with The Shield facing off against Orton, Sheamus and ???

Big Show asks Orton & Sheamus to choose him as their partner against The Shield. Sheamus says they’ve already chosen…RYBACK!!!

Tamina tosses Layla around like a rag doll to start. Tag to Aksana who methodically wears down Layla. Hot tag to Kaitlyn who cleans house. Kaitlyn with a big spear but Layla steals the pin.

Backstage Naomi and Cameron were watching the match and The Bella Twins (not just talking about Nikki there, heh) and Cameron claims that she has been watching them when she was growing up. Funny because Cameron is only 4 years younger. Bella Twins make fun of them, Brodus and Tensai before beating them up.

Kane starts off in the early going with a bodyslam and a few other power moves. Dolph takes control and works down Kane but the battle picks up as they trade punches. Stalling suplex from Kane. Two clotheslines from Kane and an attempted sidewalk slam gets reversed by Ziggler into a sleeper. Ziggler jumps off the ropes but Kane catches him with a throat thrust. Kane heads to the top. Flying clothesline! AJ distracts Kane and Bryan/Big E brawl on the other side of the ring. Kane attacks Big E but gets caught by the Zig Zag because of it for the win.

Big E beats down Kane after.

We get another parody of We The People from Del Rio & Ricardo.

Match never happens as no one can say Fandango’s name correctly. Sadly.

Backstage The Shield beat down both Sheamus & Orton.

Match just starts before The Shield come out. The Shield beat down Ryback. After leaving, Henry comes back and gives Ryback three Worlds Strongest Slams.

Jericho outsmarts Swagger at the start but Swagger quickly starts overpowering him. Swagger dominates until Jericho manages to sneak in a few near falls. Jericho with a huge DDT to Swagger! Stomp to the head and some kicks from Y2J. Swagger counters and goes for the Gutwrench Powerbomb but gets reversed into a Walls of Jericho attempt. Swagger reverses into the Patriot Lock. Jericho reverses into the Walls! Swagger makes his way to the ropes as Coulter gets onto the apron. Baseball slide dropkick from Jericho. Jericho throws Swagger shoulder first into the steps. Jericho heads to the top. Crossbody from Jericho for a huge near fall. Swagger tosses Jericho into the turnbuckle but runs and misses Jericho in the corner. Jericho goes for the Codebreaker but Swagger catches him and tosses him into the turnbuckle, head first. Gutwrench Powerbomb from Jack Swagger for the win.

Swagger and Coulter celebrate as the show comes to a close. 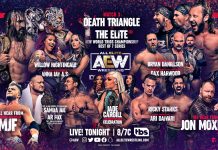 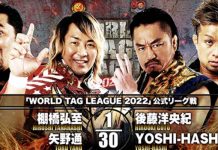