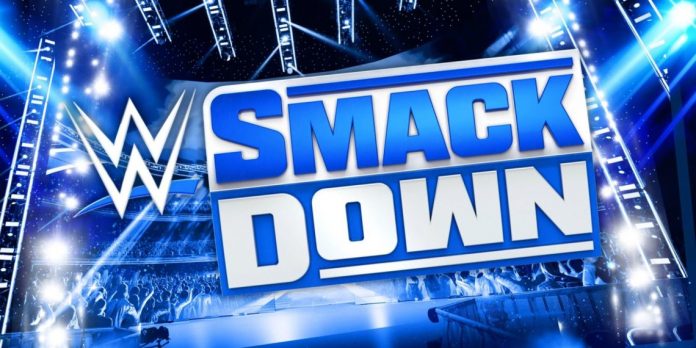 Kicking off this weeks Smackdown with a recap of the end of the main event between Roman Reigns & Drew McIntyre for the Undisputed WWE Universal Title as well as the debut of Solo Sikoa at Clash At The Castle this past Saturday.

Ridge Holland & Giovanni Vinci starts this match off with a lock up they exchange submissions before Vinci looks for a shoulder tackle. Holland blocks it before Ludwig Kaiser makes the blind tag. Kaiser hits Holland with a right hand before Vinci tags back in. Holland delivers a hip toss, followed by a shoulder tackle. Butch tags in and delivers a dropkick. He goes after Vinci’s fingers, then stomps on his arm. Gunther tags in and Butch delivers a series of chops. Gunther hits him with one of his own and drops Butch to the mat. Sheamus then tags in as the crowd gets fired up that sends us to our 1st commerical break of the night.

After the break Kaiser delivers a chop to Holland. Vinci tags in and delivers a dropkick then he hits a stomp followed by a kick to Holland’s midsection. Vinci hits a suplex, then goes for a cover but Holland kicks out. Gunther tags in and looks to suplex Holland. Holland blocks it and Gunther delivers a chop, sending Holland to the mar. Kaiser tags back in and Holland manages to hit a spinebuster. He makes the hot tag to Butch as Vinci tags in. Butch delivers a step up enziguri, followed by the double knees and a German suplex. He hits a kick to the back of Vinci’s head then goes for a pin but Vinci kicks out. Butch locks in an arm bar, but Kaiser breaks it up while the referee is distracted, Gunther delivers a chop to Butch. Butch delivers a kick to Vinci, but Vinci fires back with a clothesline that takes us to a another commercial break.

After the break Gunther has Butch in a Boston Crab then he transitions into a crossface, but Butch escapes. Gunther hits a couple of bodyslams, then looks for a German suplex but Butch lands on his feet. Vinci tags in and prevents Butch from making the tag. Butch hits a step up enziguri as Sheamus rallies the crowd. Sheamus and Kaiser tag in. Sheamus hits him with a couple of clotheslines before hitting the 25 Beats Of The Bodhran then he hits Kaiser with the White Noise on top of Vinci as the crowd erupts. Sheamus looks for the Brogue Kick on Kaiser, but hits Vinci instead. He plants Kaiser before Holland tags in. Holland hits a lariat to the back of Kaiser’s neck, then goes for a pin but Gunther breaks it up. Sheamus gets in the ring and both men start firing off chops on one another then they spill to the outside before Sheamus hits Gunther with a knee back in the ring, Holland sends Kaiser to the mat. Vinci tags in and he hits the Imperium Bomb for the win.

We come back from the break Undisputed WWE Tag Team Champions The Usos & Sami Zayn make their way down to the ring.

Zayn grabs a mic and tells fans to throw those ones up as he gets hyped up. Zayn says they have some serious things they want to talk about. Jey Uso says that Roman Reigns beat Drew McIntyre on his home turf and tells McIntyre he doesn’t know how deep The Bloodline runs. Jimmy Uso then introduces Solo Sikoa.

Solo Sikoa’s music hits and he heads to the ring. Sikoa says that if someone comes for his family, he comes for them. He says that he is here to stay and The Bloodline just got stronger before saying they’re the ones.

Drew McIntyre’s music hits and he heads to the ring with a chair in hand. He hits Sikoa with it and looks to hit him in the back, but Zayn pushes him out of the way and takes the shot for him. McIntyre tells Sikoa he wants to fight him tonight and Sikoa agrees.

Dolin tags back in and hits a right to Aliyah’s midsection. Dolin delivers a kick to Aliyah’s back, followed by a forearm. Jayne tags back in and delivers a kick to Aliyah. She hits a running senton, then goes for a pin but Aliyah kicks out. Jayne locks in a shoulder submission, but Aliyah escapes. Jayne sends her head into the top turnbuckle before tagging in Dolin. Aliyah makes the hot tag to Rodriguez. She delivers a clothesline to Dolin then a fallaway slam. She hits a Corkscrew Elbow, then goes for a pin attempt but Dolin kicks out. Jayne tags in and Rodriguez sends her into the mat. She delivers the Texana Bomb for the win.

We get a recap of the confrontation between Ronda Rousey & Adam Pearce last week.

Michael Cole & Corey Graves then announce that Ronda Rousey was disciplined for her actions behind the scenes.

Xia Li, Sonya Deville, Natalya & Lacey Evans go after Ronda Rousey. Li & Natalya send Rousey out of the ring. Li rolls up Natalya, but she kicks out. Evans hits Natalya with a Woman’s Right, but Deville delivers a knee to send her to the outside. Rousey then tosses Deville into the barricade before locking in the armbar on Natalya & Natalya had no choice but to tap out.

Li fires off left and right hands on Rousey. Rousey looks for an armbar but Evans rolls her up. Rousey kicks out before locking in the armbar meanwhile, Deville simultaneously locks in an arm & choke hold that gets both women to submit.

Deville & Rousey face off then they try to take one another down. Rousey looks for Piper’s Pit, but Deville counters into a sleeper. Rousey sends Deville into the barricade to break it up both women get back in the ring before Rousey hits Deville with Piper’s Pit. Rousey teases the armbar but locks in the Ankle Lock instead that gets Deville to tap out.

We then go to the locker room area where The Usos hyping up Solo Sikoa ahead of his match with Drew McIntyre later on tonight. Sami Zayn walks in and Sikoa says he appreciated Zayn’s help in the ring. Jey scoffs and Jimmy brushes it off. Zayn says he wants Sikoa to know that they’re all looking out for him before Sikoa says he wants to do it on his own. Zayn offers his hand, but Jey slaps it out of the way and says they’ll all be out there at Sikoa’s side that takes us to a break.

We come back from the break we go backstage to Ronda Rousey. Shayna Baszler congratulates her and wishes her luck against Liv Morgan at Extreme Rules. Rousey says she knows she’s bummed about losing but revenge is even better. She says to let her know when she’s ready to break bones again.

Ashante Thee Adonis sends Mån.sôör to the mat then he delivers a shoulder to his midsection before Angelo Dawkins tags in he delivers a splash before Top Dolla tags in and delivers one of his own. Montez Ford tags in.

After the commerical break Mån.sôör locks in a chinlock on Adonis. He sends Adonis to the mat, then tags in Ma.çé. Ma.çé delivers an elbow, then tags in Angel Garza. Humberto Carrillo looks to take out Adonis, but accidentally hits Angel. Adonis makes the tag to Dawkins and he knocks Mån.sôör to the mat. Ma.çé tags in and Dawkins hits him with a Silencer. He goes for a cover but it gets broken up. Dawkins takes everyone out on the outside before Top Dolla looks to go flying on the outside. Maxxine Dupri gets in his face but B Fab levels her. Mån.sôör & Adonis tag in as Hit Row hits Heavy Hitter for the win.

We then head to a video package Braun Strowman’s return from last week.

Alpha Academy heads to the ring. Gable says that Seattle is lucky to have them back on the Blue Brand before telling the crowd SHOOOSHHHH. He continues on to say that they are there to ruin Strowman’s return in the same way that he ruined their tag team match on Raw. He says that they had the match won until Strowman showed up before ragging on Seattle’s sports teams the fans did not like that.

Braun Strowman’s music hits and The Monster Among Men head to the ring to a huge pop. Otis stares Strowman down before Strowman knocks Otis into the ropes and beats him down. Chad Gable tries to launch a sneak attack on Strowman, but Strowman nails him with a boot. Otis charges at him, but Strowman delivers a shoulder tackle. He hits Gable with a powerbomb, followed by one to Otis.

We then head backstage to Drew McIntyre. He says that he should be standing here as the new Undisputed Champion, but he isn’t due to Solo Sikoa. He talks directly into the camera and says that actions have consequences. He continues on to say that he won’t like his consequences.

Drew McIntyre wastes no time going after Solo Sikoa. He hits a couple of kicks and right hands before Sikoa returns the favor. McIntyre hits Sikoa with a few right hands, followed by a clothesline. Sikoa hits a back elbow before McIntyre hits the Future Shock DDT. He looks for the Claymore but The Usos pull him out of the ring that send us to a commercial break.

Sikoa delivers a hip attack, then gets in McIntyre’s face. He tells him he doesn’t belong here before whipping him across the ring. McIntyre responds with a couple of clotheslines, an elbow and a neckbreaker. He kips up and tosses Sikoa over the top rope. McIntyre looks to fly over the top rope, but Zayn grabs his ankle. McIntyre tosses him into the ring and looks for a Claymore Kick. Sikoa hits a superkick, then goes for a pin but McIntyre kicks out.

Sikoa and McIntyre exchange right hands before McIntyre delivers a Glasgow Kiss. While the referee is distracted, The Uso beats McIntyre down. The Street Profits make the save, with Montez Ford delivering a cross body off the top rope to The Bloodline. McIntyre delivers the Claymore Kick and sends Sikoa out of the ring. Out out nowhere, Karrion Kross attacks McIntyre and locks in the Kross Jacket as the referee calls for the bell.

After the match Kross keeps the Kross Jacket locked in as Scarlett watches on and the show goes off the air.