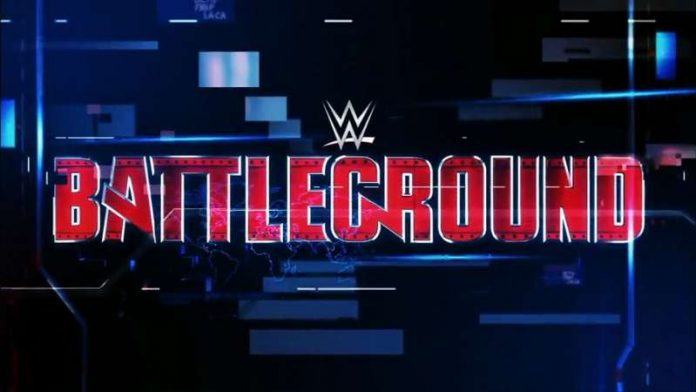 – Above is video of Aiden English cutting a promo on tonight’s WWE Battleground Kickoff pre-show match against Tye Dillinger. The promo was recorded after Saturday’s live event in Wildwood, NJ. English calls Tye WWE’s Perfect Trash and says he will finally bring a Perfect 10 down to floor zero, showing us what true art really is. Dillinger says tuning in to watch him destroy Dillinger will be the best decision we’ve ever made.

– In a bit of trivia for tonight’s pay-per-view, the only title that has ever changed hands at a Battleground event was the WWE Intercontinental Title in 2014. The Miz won a battle royal for the vacant title that night, last eliminating Ziggler. Tonight’s show will see AJ Styles defend the WWE United States Title against Kevin Owens, WWE Champion Jinder Mahal defend against Randy Orton inside Punjabi Prison and SmackDown Tag Team Champions The Usos defend against The New Day.

– Below are videos of Mickie James, Sasha Banks and Bayley giving predictions for tonight’s Fatal 5 Way Elimination Match between Lana, Natalya, Tamina Snuka, Charlotte Flair and Becky Lynch. The winner will go on to face SmackDown Women’s Champion Naomi at SummerSlam. Mickie goes with Natalya while The Boss picks Tamina or Natalya and Bayley picks Becky.

.@itsBayleyWWE shares her thoughts on #WWEBattleground and the #Womens Fatal 5 Way. pic.twitter.com/VXbIiHmAbw