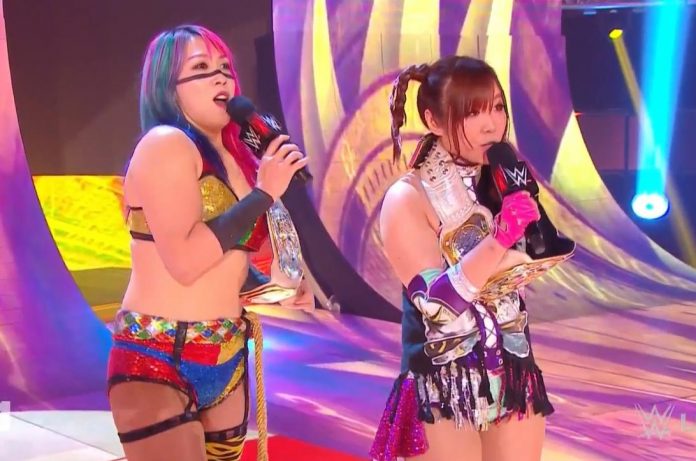 It looks like RAW Women’s Champion Asuka could be the one to send Kairi Sane out of WWE and back to Japan. As we’ve noted, there have been reports on Sane returning to Japan to be with her husband, and possibly retiring from in-ring competition after wrestling in that country for another year. It was believed that Sane could end up re-signing with WWE, but there had been plans for WWE to write her out of the company storylines using another Superstar, which would have set up Asuka’s feud for SummerSlam. Now it looks like WWE may go with Asuka to send her partner packing after an appearance on RAW Talk.

This week’s RAW saw The Kabuki Warriors lose the main event to the WWE Women’s Tag Team Champions – Sasha Banks and SmackDown Women’s Champion Bayley. Sane and Asuka then appeared on the RAW Talk post-show with hosts Charly Caruso and Samoa Joe. Sane told her tag team partner that if she retains her title on Sunday at WWE’s “The Horror Show at Extreme Rules” pay-per-view, then she will be ready for Asuka.

Sane said, “If you want that match, I’m ready for… Asuka!”

“I want to face you!,” Asuka responded after they hugged.

“Please! That is my dream,” an emotional Sane responded.

Sunday’s Extreme Rules pay-per-view will see Asuka defend her title against Banks in singles action. Sane does not have a match at the pay-per-view.

While there have been reports from multiple sources on Sane possibly leaving WWE to go back to Japan, it was also reported last week how WWE was expected to make another offer to get Sane to stay, a good offer at that. It was noted that Sane’s WWE departure was not a lock or a done deal as of July 7. Sane, who just married her longtime partner back in February, returned to RAW TV on july 6 for her first appearance since losing the brutal match to Nia Jax in early June. There had been at least some speculation that she was finishing up with WWE then, but WWE then granted The Kabuki Warriors the title shot for this week’s show. After last week’s return to TV, Sane tweeted that she was “back” but there’s no word on how long she’s there for. WWE could end up doing Sane vs. Asuka at SummerSlam, but that has not been confirmed. Asuka has also been rumored to possibly face several challengers at SummerSlam – Charlotte Flair, Nia Jax or Shayna Baszler, who made her return this week and issued a warning to the roster, which could be a sign that she will be challenging Asuka soon.

ask and you shall receive:@KairiSaneWWE will face @WWEAsuka for the RAW women’s championship if asuka retains at extreme rules.