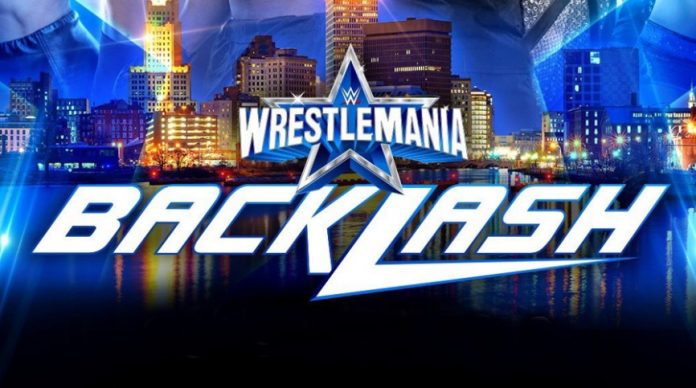 Collar and Elbow Tie Up. Hammerlock Exchange. Rollins goes for a Belly to Back Suplex, but Rhodes lands back on his feet. Rollins blocks the drop down uppercut. Rollins taunts Rhodes. Test Of Strength. Rhodes applies a wrist lock. Rhodes backs Rollins into the turnbuckles. Rollins turns Rhodes over. The referee calls for a clean break. Rollins kicks Rhodes in the gut. Rollins sends Rhodes to the corner. Rhodes dives over Rollins. Rollins with a cradle cover for a one count. That leads us to a quick standoff in the center of the ring. Standing Switch Exchange. Rollins slaps Rhodes in the back of the head. Rhodes unloads a flurry of strikes. Rollins retreats to the outside. Rollins with a falling sledge. Rollins is raining down haymakers. Rollins stomps on Rhodes chest. Rollins is choking Rhodes with his boot. Rollins with a Jumping Knee Strike that sends Rhodes crashing into the ringside barricade. Rhodes slams Rollins head on the steel ring steps. Rollins with an Inside Out Lariat on the floor. Rollins rolls Rhodes back into the ring.

Rollins punches Rhodes in the back. Rhodes is displaying his fighting spirit. Rollins reverses out of the irish whip from Rhodes. Rollup Exchange. Rhodes launches Rollins over the top rope. Rollins with a forearm smash. Rhodes has Rollins perched on the top turnbuckle. Rhodes punches Rollins in the back. Rhodes with The Stalling SuperPlex. Chop Exchange. Rollins with a Spinning Back Kick. Rhodes with a running forearm smash. Rhodes dives over Rollins. Rhodes Powerslams Rollins. Rhodes clotheslines Rollins over the top rope. Rollins avoids The SpringBoard Crossbody Block. Rollins goes for The Suicide Dive, but Rhodes counters with a forearm smash. Rhodes ducks a clothesline from Rollins. Rhodes hits The Cody Cutter for a two count. Rhodes applies a waist lock. Rollins decks Rhodes with a back elbow smash. Rollins kicks Rhodes in the gut. Rhodes denies The Pedigree. Rollins with a Step Up Enzuigiri. Rollins SuperKicks Rhodes for a two count. Rollins plays to the crowd.

Lashley is throwing haymakers at Omos. Lashley backs Omos into the ropes. Lashley kicks Omos in the gut. Lashley with rapid fire haymakers. Lashley gets distracted by MVP. Omos drops Lashley with The Big Boot. Omos sends Lashley to the corner. Omos with a back elbow smash. Omos levels Lashley with Two Body Avalanches. Omos applies the cravate. Lashley with heavy bodyshots. Omos drives Lashley out of the ring. Lashley gets back in the ring at the count of seven. Omos delivers The Snake Eyes. Omos with another Big Boot. Omos puts his knee on the back of Lashley’s neck. MVP talks smack to Lashley. Omos goes for a Powerslam, but Lashley lands back on his feet. Lashley with a back elbow smash. Lashley kicks Omos in the gut. Lashley applies The Sleeper Hold. Omos sends Lashley back first into the canvas. Lashley side steps Omos into the turnbuckles.

Rockers Punches. Styles with clubbing headbutts in the corner. Styles repeatedly stomps on Edge’s chest. Styles with the irish whip. Styles dropkicks Edge to the floor. Styles tosses Edge around the ringside area. Styles resets the referee’s ten count. Styles with a Flatliner into the announce table. Edge is trying to regain his composure. Styles with a Baseball Slide Dropkick. Styles with The Asai MoonSault. Styles is fired up. Styles rolls Edge back into the ring. Styles prepares for The Phenomenal Forearm. Edge drops Styles with The Big Boot. Edge sends Styles shoulder first into the steel ring steps. Edge wraps the left shoulder of Styles around the bottom turnbuckle bar. Edge punches Styles. Edge with a double leg takedown. Edge catapults Styles shoulder first into the steel ring post. Edge poses for the crowd. Edge slams the left hand of Styles on the ring stairs.

Fourth Match: Charlotte Flair (c) vs. Ronda Rousey In An I Quit Match For The WWE SmackDown Women’s Championship

Collar and Elbow Tie Up. Corbin kicks the left hamstring of Moss. Corbin slams Moss’s head on the top turnbuckle pad. Moss decks Corbin with a back elbow smash. Moss is throwing haymakers at Corbin. Moss drives his knee into the midsection of Corbin. Moss blocks a boot from Corbin. Moss kicks the right knee of Corbin. Moss leapfrogs over Corbin. Moss drops down on the canvas. Moss with a Hip Toss. Moss poses for the crowd. Corbin launches Moss over the top rope. Moss with a forearm smash. Moss trips getting back into the ring. Corbin kicks Moss in the face. Corbin Chokeslams Moss. Corbin kicks Moss out of the ring. Corbin with a driving knee lift that sends Moss face first into the steel ring post. Corbin is raining down haymakers. Corbin rolls Moss back into the ring. Moss with heavy bodyshots. Corbin scores the elbow knockdown for a two count. Corbin is mauling Moss in the corner. Corbin whips Moss into the turnbuckles. Corbin applies the half nelson chin lock. Moss gets back to a vertical base. Moss attacks the midsection of Corbin. Corbin reverses out of the irish whip from Moss. Corbin with The Wrap Around Lariat for a two count. Corbin with an Inside Out Slam. Corbin follows that with a Senton Splash for a two count.

Corbin punches Moss. Moss decks Corbin with a back elbow smash. Moss launches Corbin over the top rope. Moss ducks under two clotheslines from Corbin. Moss with a running shoulder tackle. Moss transitions into a ground and pound attack. Moss sends Corbin face first into the ring post. Moss tees off on Corbin. Moss rolls Corbin back into the ring. Moss with The Corner Spear. Corbin responds with a knee lift. Moss catches Corbin mid-air. Moss with The Fallaway Slam for a two count. Corbin denies The Punch Line. Corbin with a Belly to Back Slam for a two count. Corbin talks smack to Moss. Corbin with two haymakers. Moss denies The End Of Days. Corbin repeatedly stomps on Moss’s chest. Corbin is raining down haymakers. Corbin puts Moss on the top turnbuckle. Moss with forearm shivers. Corbin avoids The Diving Clothesline. Corbin hits Deep Six for a two count. Corbin levels Moss with The Body Avalanche. Moss sends Corbin out of the ring. Moss ducks a clothesline from Corbin. Moss connects with The Sunset Flip to pickup the victory.

Jimmy Uso and Randy Orton will start things off. Collar and Elbow Tie Up. Jimmy backs Orton into the turnbuckles. Jimmy is throwing haymakers at Orton. Orton with the greco roman eye poke. Orton uppercuts Jimmy. Orton tags in Riddle. Assisted Floating BRO. Riddle stomps on Jimmy’s chest for a one count. Jimmy with a reverse hammer throw into the turnbuckles. Jimmy with a knife edge chop. Jimmy uppercuts Riddle. Jimmy sends Riddle to the corner. Riddle dives over Jimmy. Riddle with a Mid-Kick. McIntyre tags himself in. Riddle with a GutWrench Suplex. McIntyre slams Jimmy’s head on the top turnbuckle pad. McIntyre unloads two knife edge chops. Jimmy nails McIntyre with a throat thrust. McIntyre reverses out of the irish whip from Jimmy. McIntyre kicks Jimmy in the chest. McIntyre with a Deadlift Vertical Suplex. McIntyre tells Reigns to bring it. Heyman says that Reigns has nothing to prove, he’s the tribal chief. Jimmy tags in Reigns.

Reigns is playing mind games with McIntyre. Reigns tags out to Jey. McIntyre drops Jey with The Big Boot. McIntyre with an Overhead Belly to Belly Suplex. McIntyre tags in Riddle. Riddle stomps on the left hand of Jey. Riddle with a GutWrench Suplex. Riddle with two forearm smashes. Jimmy made the blind tag. Short-Arm Reversal by Jey. Jimmy with an Apron Enzuigiri. Jey clotheslines Riddle. The Usos repeatedly stomps on Riddle’s chest. Jimmy uses the middle rope as a weapon. Jey delivers a cheap shot behind the referee’s back. Jimmy tags in Jey. Wish Bone Attack. Jey bodyslams Riddle. Jey stomps on the right hand of Riddle. Jey stands on the back of Riddle’s neck. Jimmy kicks Riddle in the face. The referee is trying to calm down Orton and McIntyre. Jimmy tags himself in. Jey with a Pendulum BackBreaker. Jimmy with a flying axe handle strike for a two count. Jimmy punches Riddle. Jimmy tags in Reigns.

Reigns pulls Riddle down to the mat. Reigns slams Riddle’s head on the top turnbuckle pad. Reigns is throwing haymakers at Riddle. Riddle is displaying his fighting spirit. Reigns drives his knee into the midsection of Riddle. Reigns scores the elbow knockdown. Reigns talks smack to Orton and McIntyre. Reigns with The Uranage Slam for a two count. Reigns tugs on Riddle’s hair. Reigns tags in Jimmy. Jimmy with a gut punch. Jimmy slams Riddle’s head on the top turnbuckle pad. Jimmy with a knife edge chop. Riddle side steps Jimmy into the steel ring post. Jimmy tags in Jey. Jey stops Riddle in his tracks. Jey sends Riddle shoulder first into the ring post. Jey SuperKicks Orton off the ring apron. Jey goes for The Running Stinkface, but Riddle counters with a Step Up Kick. Reigns rolls Jey back into the ring. McIntyre and Reigns are tagged in. Huge standoff in the center of the ring.

McIntyre tees off on Jey. McIntrye launches Jey across the ring. McIntyre goes for The Claymore, but Jey counters with a SuperKick. The Usos delivers The Double SuperKick. Riddle and Jey are tagged in. Riddle ducks a clothesline from Jey. Riddle with an Overhead Kick. Riddle with Two Flying Forearm Smashes. Riddle follows that with The Exploder Suplex. Jey avoids The PK. Riddle with The BROTon. Riddle blasts Jey with The PK. Riddle with The Fisherman’s Suplex. Riddle lands The Floating BRO for a two count. Riddle goes for The RKO, but Jey rolls him over for a two count. Jey avoids The Roundhouse Kick. Jey with The Pop Up NeckBreaker for a two count. Orton dumps Jimmy out of the ring. Orton slams Jimmy’s head on the barricade. Orton sends Jimmy face first into the ring post. Orton with two uppercuts. Orton with rapid fire haymakers. Reigns responds with The Superman Punch off the steel ring steps. McIntyre sends Reigns chest first into the ring stairs. McIntyre clears the announce table. McIntyre goes for a PowerBomb, but Jimmy gets in the way. McIntyre HeadButts Jimmy. Reigns with The Uranage Slam through the announce table. Riddle with The SomerSault Plancha. Jey follows that with The Suicide Dive. Jey rolls Riddle back into the ring. Jey dodges The Roundhouse Kick. Jey with a Spinning Enzuigiri. Riddle with an OverheadKick. Jey SuperKicks Riddle. Riddle connects with The Avalanche RKO. Reigns plants Riddle with The Spear to pickup the victory.