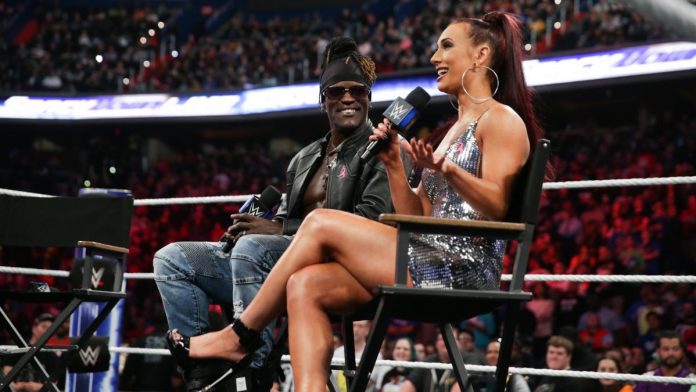 WWE Mixed Match Challenge Season 2 came to an end at WWE TLC as R-Truth and Carmella beat Jinder Mahal and Alicia Fox in the finals.

By winning Mixed Match Challenge Season 2, R-Truth and Carmella will enter their respective Royal Rumble Matches at No. 30 next month. WWE had also been hyping that the winning team would earn “an all-expenses-paid vacation to anywhere in the world,” and that storyline culminated after the match. In an in-ring interview, R-Truth, unbeknownst to Carmella, said he submitted their vacation request to WWE headquarters in Stamford, Connecticut.

According to Mike Johnson on the PWInsider Elite Podcast (h/t WrestlingNews.co), WWE will shoot comedy-based segments with R-Truth and Carmella at their headquarters a few days after Christmas, which will air on SmackDown LIVE (likely on the New Year’s Day episode, which will also be a taped show).

Due to the holidays, SmackDown LIVE won’t air live next Tuesday night. Following last night’s broadcast from Fresno, California, WWE taped next week’s show, which featured R-Truth and Carmella in an in-ring segment. Click here to find out what they did (contains spoilers).

While Mixed Match Challenge Season 2 was plagued by injuries and replacement partners, R-Truth & Carmella and Mahal & Fox stayed intact throughout. Both teams were winless during the round-robin portion of the tournament before each tandem won a match to make the playoffs.

One WWE employee felt that Mixed Match Challenge was a “giant mess” due to the various injuries and lack of direction.

Speaking on the condition of anonymity, this employee told Fightful.com last week, “Mixed Match Challenge is a giant mess. Nobody knows on a weekly basis what’s going to happen, who will be hurt, or how things will end up. It’s really cheap content and easy to film so (we’re) going to keep doing it until we’re not able to do it anymore. The wrestlers enjoy working the matches, but it has become a big inconvenience for several who lose their days off to a tournament that won’t really help them.”

Despite the show’s lack of direction on a weekly basis, R-Truth and Carmella vs. Mahal and Fox was always WWE’s plan for the finals, according to John Pollock of POSTWrestling.com.

Pollock was told by WWE sources that R-Truth, Carmella, Mahal and Fox were put in the finals for “entertainment value” and because they wouldn’t have had matches at TLC otherwise.