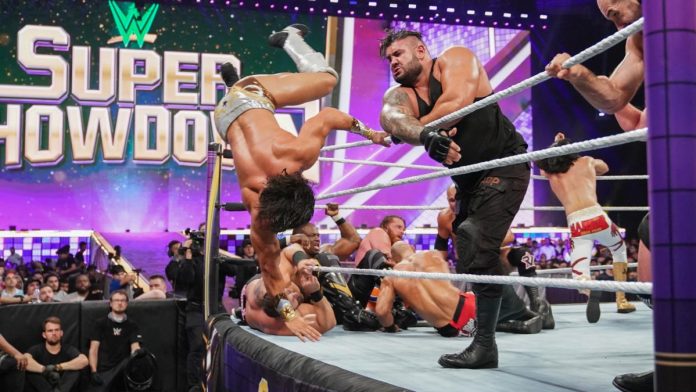 The WWE has become a revolving door of mediocrity.

At a time when it’s become the “cool thing” to take jabs at WWE and claim that All Elite Wrestling will somehow reignite the Monday Night Wars, let’s take a second to make a few statements before this discussion. AEW has the potential to become competition to the sports entertainment empire. All Elite’s goal should be to generate revenue and become profitable, which is what actually determines success from a business prospective. Assuming that All Elite’s Tuesday night show in October will automatically get better ratings than Raw or Smackdown is misguided. The more important aspect is that All Elite is set up to make money, which can gives wrestlers and fans options. That said, the WWE has $2.4 billion in TV rights for the next five years so the company is secure and they aren’t in any jeopardy, but are they taking the short-end money to sacrifice the future? More specifically, after the conclusion of this mega TV contract, who will be the legitimate money-drawing stars in five years?

I’ve written before about the philosophy of the brand as the draw as opposed to any particular star and the pros and cons of it. However, as the recent ratings have shown, the audience isn’t increasing and the reason for that has to do with the fact that the brand is the selling point. The brand is an intangible, an important intangible, but still an intangible of the industry. How exactly does the WWE brand draw in new fans? The “brand first” philosophy inherently isn’t designed to bring new viewers to the product. Is someone that isn’t currently a wrestling fan going to see “Monday Night Raw” listed on their cable guide and randomly decide that’s something they want to watch? The characters are ultimately what brought new fans to wrestling, and not allowing those personas to be the center piece of the product is what will limit the amount of people that discover it. When the MTV audience saw Hulk Hogan and Roddy Piper, that made new fans, not simply the WWF logo. When a main stream audience took notice of Stone Cold and The Rock, a record-setting number of viewers watched the show. As cool as the famous “scratch logo” was, that alone wasn’t the reason people tuned in. Something that should be noted, the argument could be made that the WWE has more in-ring talent under contract now than at any other time in history. Adam Cole, Samoa Joe, Kevin Owens, Kofi, Roman Reigns, Sami Zayn, Finn Balor, Seth Rollins, etc. so why has the product been so underwhelming in recent months?

As I mentioned in an article last week, the WWE monopoly has led to a level of complacency within the company. That complacency and the 50/50 booking of the product doesn’t lend itself to star power or compelling television, which leads to the slump in recent ratings. One of the many short-term solutions for a much more complex problem was Brock Lesnar’s potential cash-in of the MITB contract. After the third week in a row, Lesnar had Seth Rollins motionless in the ring on Raw this past week, but decided that Super Showdown was a better time to cash-in the title shot. There was no explanation and given that despite the suggested injuries on Raw, Rollins was able to defeat Baron Corbin before he prevented Lesnar from the cash-in at Super Showdown, doesn’t this make Lesnar look rather silly for giving the champion a few days to recover? Isn’t the championship supposed to be theoretically the most important aspect on the show? Why wouldn’t Brock get the championship at the first opportunity to (in theory) maximize his payoff for his next title defense? The way this entire angle was booked is illogical and makes one of the legitimately highest paid in the company look foolish. Wasn’t Brock supposed to be the “real fighter” on the roster? Where this goes from here is anyone’s guess, but after a fourth bait-and-switch, how is there any buzz for the eventual cash-in for a title match?

The Kofi/ Dolph match was solid, but completely inconsequential to the WWE title or the Smackdown brand. It’s not as though this angle will propel Ziggler into the main event picture again. If anything, Dolph will do the job again at the next pay-per-view and then probably disappear from WWE TV while the company pays him to not wrestle anywhere else. This bout was representative of most of the show as a whole, it’s inconsequential to the rest of the product. It’s basically a televised house show, which is fine except for the fact that it was promoted as an “equivalent” to Wrestlemania. If that is how this event is pushed on TV then there must be some standards for the quality of the show.

Perhaps the most disappointing aspect of this entire situation is that many websites reported that Alexa Bliss vs. Natalya was scheduled for the event, but was cancelled when they Saudi government didn’t allow it because of the restrictions they have towards women in the country. For the past few years, the WWE has tried to market its “women’s revolution” as a way to give the female athletes the rightful platform that they deserve within the sport. However, despite the fact that talented women like Becky Lynch, Charlotte, and others legitimately deserve that chance, WWE’s “women’s revolution” was more of a PR gimmick than anything else. If the WWE truly wanted the women to be represented then they could’ve said there was no deal unless the women had the chance to compete. The bottom line is, the “women’s revolution” or anything it supposedly represents wasn’t as important as the money the Saudi government paid for the WWE to be propaganda for publicity. Ted DiBiase was right, everyone’s got a price, even Vince McMahon.

Speaking of Saudi money, the government paid millions of dollars to get The Undertaker and Goldberg to return to the ring for the main event. First it should be noted that the promo they did on Smackdown to hype this match was tremendous, and it speaks volumes about the current landscape of the company when two aging legends in their 50s can promote a match better than the rest of the roster in their prime. That being said, the bout was roughly eight minutes and went about five minutes too long. Goldberg got cut and might’ve been knocked out at one point during the contest, at least that’s what he tweeted after the match. When the Undertaker went for a tombstone, Goldberg’s head legitimately hit the canvas and it looked very dangerous. After that, Goldberg went for a jackhammer and almost dropped The Undertaker on his head, which was followed up with the sloppy finish to the match that saw The Undertaker get the win. Don’t get me wrong, I respect everything that Undertaker has done in his career, he dedicated his life and sacrificed his body for professional wrestling. He has absolutely earned the right to decide when he officially retires, but that doesn’t make it any less sad to watch these types of matches. This Undertaker/Goldberg contest was embarrassing and concerning to watch at times because there was the risk of serious injury from some of the botches that happened in this match.

So, following an event that paid the company millions of dollars, there’s not much buzz to help the already declining ratings for Raw next week. Brock Lesnar was used for another bait-and-switch angle, which has probably already peaked, two legends looked like a sad shell of themselves, and the company that’s already worth nearly a billion dollars would rather take the money to be used as a propaganda tactic for a government that admittedly murdered a journalist than promote an event at a location where women could wrestle or Sami Zayn could be welcomed at the building. There’s really nothing from this event that speaks well about the perception of the WWE brand, which as mentioned earlier, is pushed as the primary selling point of the company. All things considered, is it a surprise that the ratings declined?

WWE PWMania.com Staff - 01/24/2020
In an interview with Chris Van Vliet, former WWE star Alex Riley opened up about backstage heat he had with John Cena during his...