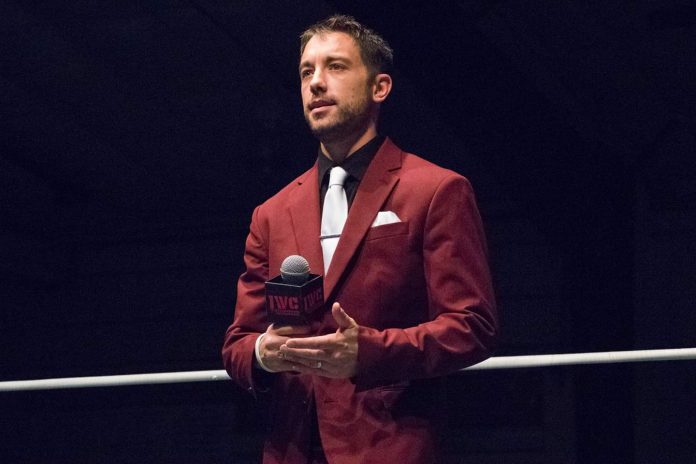 “Put your money where your mouth is.”

As cliche as that phrase is, it can prove to be true more often than not. Ring Of Honor ring announcer, Nick Lendl did it.

In 2015, Nick paid the fee for a WWE Performance Center tour, a $2,000 price tag to get in the doors of one of the premiere training facilities in the world. Of course, that fee didn’t cover the airfare to Orlando or the hotel accommodations for the duration of the trip.

“I couldn’t have cared less about meeting the NXT wrestlers or the tour itself. What intrigued me was the live Q&A session they had mentioned in the press release with the NXT talent and staff at the conclusion of the tour. That was my chance to simply raise my hand and ask ‘How do I become a ring announcer?’ I had spent $2,000 to just ask that one question. I took a chance on myself and it paid off,” Lendl explained.

But, this flight to sunny Orlando wasn’t made on a whim. Similar to any venture where the intention is serious, Nick did research. A few years before he sat in front on the NXT staff, he contacted Justin Roberts, who was working with the company at the time and is now the lead ring announcer for All Elite Wrestling. Roberts told Nick to obtain a degree in Communications so Nick did just that, graduating with the degree Roberts recommended, and minored in Psychology from Robert Morris University in 2013 while he wrote for the school’s newspaper and appeared on their local TV show.

So when the accomplished Matt Bloom, who worked around the world as Giant Bernard in Japan and as A-Train in the WWE, gave Lendl the chance to climb inside a WWE ring and perform the duties, Nick was more than ready. Bloom, one of the head trainers at the facility, was very impressed by the visitor’s impromptu audition.

“The staff was blown away by my performance. They couldn’t believe I had never ring announced before. Bloom told me to start working indies, get experience, and keep in contact,” Lendl said.

In truth, Nick always felt at home with a mic in his hand because home is where he discovered his gift of gab. Nick’s father played in a local band for years, and as earlier as his toddler phase, the youngster found himself on stage with his dad, jammin’ to a variety of cover tunes. When not in front of a live audience at local music festivals, a young Lendl would recite songs in the family living room.

Giving a huge shout-out to my Dad!!

Later tonight, just three days shy of his 68th birthday, he returns to the recording studio to help lay down some tracks with some prominent names in Oldies.

50 plus years in the Music business and the first person to show me a microphone! 🎤 pic.twitter.com/fBVksRUnmO


With Bloom’s instructions cemented in his mind, Nick set up to earn his stripes and get some valuable seasoning on the local circuit. A native of Pittsburgh, a region known almost as much for its history of wrestling as for the steel it once produced, Nick sought out the International Wrestling Cartel, one of the longest-running organizations in the area. The IWC, promoted for years under the direction of Norm Connors, one of the godfathers of the Pittsburgh scene before its current promoter, Justin Plummer took the reigns, hosted countless stars during its lengthy history.

“I was in contact with IWC here in Pittsburgh and owner, Justin Plummer. We agreed to meet at the next IWC show at the Court Time Sports Center to talk, and by the start of 2016, I was on camera as a commentator, backstage Interviewer, and ring announcer. IWC is the top indy promotion around. I’ll never be able to thank Justin Plummer enough for giving me my start. I’ve made so many friends and learned so much over the last five years there. It’s a place I can always call home,” Nick remarked.

“I’ve known Nick Lendl since he debuted in the Pittsburgh independent scene with IWC. Early on you could tell he was going to make something of his dream with his work ethic, professionalism and personality. I’m very happy to see his travels take him to Ring of Honor and Madison Square Garden, and really believe this is just the beginning for him,” said Dan Hooven, one of the popular grapplers on the IWC roster.

Another one for the bucket list!
I never thought I'd Ring Announce a #CasketMatch!#RingAnnouncer #Wrestling #IWC pic.twitter.com/uOWnTNL9aC


With steady work in his home town, Lendl knew he didn’t want to slow his momentum, and began to bridge out in other ventures, announcing pro wrestling, boxing, and mixed martial arts around the tri-state area. Along his travels, he announced a show that featured Punishment Martinez, who is currently on WWE television as Damien Priest. The former Martinez told Lendl to consider attending the next Ring Of Honor training seminar, which Nick did in late-2017.

Nick bet on himself to get inside the WWE Performance Center, and he doubled down to get a foot in the door at Ring Of Honor.

“I was invited to their next show two weeks from then in North Carolina to hang out and meet the guys. So, I got some friends together and we rented a hotel room in North Carolina and drove ourselves there,” Nick said.

With no guarantees for anything other than the 10-hour car trip to get to the venue, Nick showed up just hoping for a chance to show his natural talent. He met with Bobby Cruise, the long-time ROH ring announcer, who etched himself in the history books of professional wrestling with the iconic sound bytes when the prestigious ROH World title changed hands. Cruise could immediately see the passion and determination from the eager Lendl and opened the door for the aspiring wordsmith to get his chance with ROH.

“At that show, I met Bobby Cruise and we clicked. He let me announce the dark match that night and told me to come to every show I could reasonably drive to, and he would let me announce some matches. I did that for Philadelphia, New York, Columbus, Michigan and Chicago. Three years later, I no longer need to worry about booking my own flights or hotels, I’m paying my bills doing what I love, I’m on the official ROH roster page, I’ve announced multiple episodes of ROH TV and ROH pay-per-views by myself, and I’m living my dream ,” Lendl commented.

Six different people have posted/DM'd/messaged me in some fashion claiming I'm the result of @realBobbyCruise, @JustinRoberts and @TonyChimelWWE having a baby, and that's the voice we hear when I Ring Announce.
I don't know if that's a dig at me or not, but what great company!! pic.twitter.com/nEP1hMhbwD


While Nick credits Cruise with his tenure in Ring Of Honor, the veteran voice of Honor was also responsible for what Lendl considers the highlight of his career so far, the opportunity to announce a bout at the legendary Madison Square Garden in 2019.

“Bobby Cruise pushed really hard for me to get a match at The Garden and thanks to him, I did. I ring announced a six woman tag team match featuring the late Hanna Kimura,” he said.

Wishing the happiest of birthdays to my mentor and friend, @realBobbyCruise! It's safe to say I wouldn't be where I am today without him.


When his not zigzagging the country to proclaim the winners of sports entertainment glory, the dad of two young kids trades watching Pure title matches for episodes of Paw Patrol. On the weekends, he makes the tag to his wife, who’s work during the week, allowed him to travel to events on the weekend, which he cites as a good balance of family time and the unique occupation of the wrestling business.


While the past five years have been somewhat of a whirlwind for Nick, as he dove into his passion and his desire to make it as a full-time fixture in the industry, he emphasized he always looks for the next step in his journey, which grew from a fandom that inspired him after he stumbled across a VHS copy of Wrestlemania 14 over twenty years ago. Lendl’s dedication his his craft hasn’t gone unnoticed by his peers.

“Nick is an incredibly talented announcer, who picked up the art of the craft as naturally as anyone I’ve ever seen. He has natural credibility and likeability that translates to the audience well. He’s a great friend, family man, and credit to the industry,” said Joe Dombrowski, veteran IWC play-by-play announcer, as well as a producer of a variety of pro wrestling content.

Obviously, Nick Lendl’s journey in the sport isn’t complete, and to say he will continue to a role as a mainstay in professional wrestling would be a safe bet. Ironically, Nick’s story and his successes were when he gambled on himself without knowing what moves would or wouldn’t pay off. Perhaps, the biggest takeaway from his story is that hard work and the belief in yourself can pay off.

For more info about Nick, you can follow him on Twitter @nicklendl
You can see him ring announce live for IWC’s next event on March 20th with iwcwrestling.com for more details