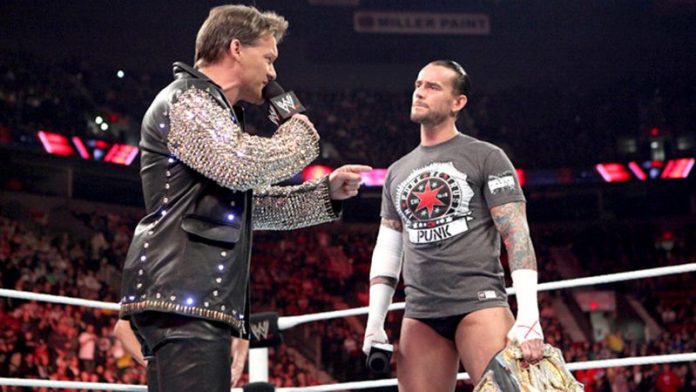 In the latest episode of his Talk Is Jericho podcast, Chris Jericho reflected on his 2012 battle with CM Punk in WWE. He revealed the original plan for their feud that was rejected:

“Well that story, I was supposed to tattoo him. He’s got so many tattoos. The thing is, people have so many tattoos now, there’s Brody King and Malakai, but back then he was the only guy that was tattooed all over. So I’ll tattoo him. I remember I pitched it to Vince [McMahon] and he was all into it until somebody told him that when you tattoo somebody it bleeds. He was still, it was after the Shawn Michaels thing, still antsy about it. I said, ‘It doesn’t bleed much.’ But somebody told him, ‘It bleeds, it bleeds, it bleeds.’ I bet you somebody that doesn’t even have any tattoos said that to him. So he goes, ‘Does it matter? It’s not even a big deal.’ I said, ‘it is a big deal, I’m tattooing him.’ He goes, ‘He’s got so many tattoos.’ I was going to tattoo my initials, ‘CJ’. He said, ‘What does it matter?’ I said, ‘It does matter. It’s like haunting him.’ For a tattooed guy, forcing my initials onto his body, anybody’s body, but especially him because you know too when you have a lot of tattoos what they mean to you. Each tattoo means something and even when Phil has a bunch that don’t mean anything to him like an ice cream sandwich or whatever, it does mean something. I’m invading your story and forcing myself onto you. Anyways Vince changes it and goes ‘Isn’t his father an alcoholic?’ And then we went down that road. He didn’t even ask Punk about it until he’d already kinda decided, and Punk obviously had to approve and was cool with it but it was supposed to go this way and Vince changed it that way, so we kind of had to make the best thing out of it that we could from that.”

Jericho also addressed his match with CM Punk at WrestleMania 28:

“I think that match is a little underrated because of that [what else was on the card] and I’ll also tell you one last little thing about it is Vince wanted that match to be two minutes long. Punk and I had visions of being Savage/Steamboat for the modern age. Vince did have a point looking back in retrospect because if you remember, I was calling his father a drunk, I poured alcohol down his mouth, I hit him with bottles, I did a lot of really shitty things and he wanted Punk to just get me in the ring and just go nuts. And he wanted to do the terrible, ‘kick the guy in the corner, ref counts to 5, and DQ.’ I said, ‘Vince, we can’t do that at WrestleMania.’ He says, ‘What else is he supposed to do? You insulted his family, you insulted his sister, and you poured alcohol down his throat. What do you think he’s supposed to do? Tackle, drop down, leapfrog? I was like, he has a point. So we decided, and Vince came up with the idea that if CM Punk gets disqualified, I win the title. So he couldn’t go completely crazy and there was some semblance of rules that had to be followed so at least we could still have a match and there was a reason Punk didn’t just grab a chair and take my head off.”