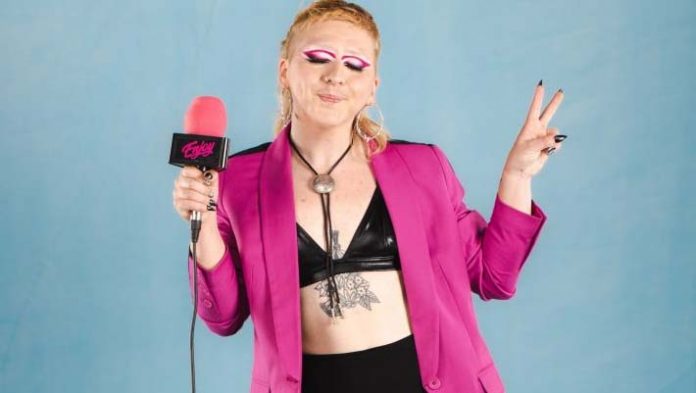 One of the benefits of higher education, at least we’re told, is that it allows students exposure to new concepts and ideas. Hollywood had us believe that the late John Belushi had an extended college career that consisted of many adult beverages and toga parties.

For one of the Pittsburgh scene’s fastest-rising personalities, Meg Fair didn’t re-enact ancient Rome during their college years, but they were introduced to an “Animal House” of entertainment during their time at Ohio University. Meg didn’t grow up a pro wrestling fan, as watching the over-the-top spectacle was forbidden in their house. In a true example of “only in pro wrestling” when Meg made their way to college, with the level of freedom that provides, a friend suggested they watch the original GLOW series on Youtube. The neon presentation of names like Tina Ferrari and Americana made an impression on them.

However, it wasn’t until Meg saw a replay of the 1996 pay-per-view where Mankind literally buried his foe alive that they were truly bitten by the wrestling bug. Pro wrestling really is an animal house.

“Though some of GLOW has not aged well, I was obsessed with the camp of it. The next thing that got me hooked was seeing the first Buried Alive match. When the Undertaker’s hand shoots out of the ground and the lightning strikes, I was like, ‘This is so corny and magical, I’m in.’ I feel lucky because my intro to wrestling also came in 2014, and so NXT had a lot of really incredible women’s storylines that hooked me,” Meg explained.

Despite the introduction to a new form of entertainment, Meg is no stranger to show business or the entertainment field. With a background in journalism, Fair has done everything from live stage performances on the drums to radio broadcast during their time at college, where they worked as the general manager of the school’s station. Media and entertainment remains one of their passions, as their Patreon page offers a wide range of content for subscribers.

“Now I put out an episode every other week on Spotify. To build off of it, I started a Patreon where I write weekly newsletters, upload essays and film photographs, share seasonal playlists and so forth. It’s a nice way to share my interests and creativity with people while finding a way to cover some of the costs of film and printing,” they commented.

The combination of their seasoned background and their discovery of sports entertainment made for a natural involvement in the sport. And, like most things in life, organic timing was the start of a journey that began to shape the direction of their life.

“I was going to wrestling shows, independent stuff around the city and NXT house shows, and a group of us often sat together and became friends. I knew a lot of those people through punk music, actually, so it just brought us closer together. Some of those folks are now the owners of Enjoy Wrestling. They approached me in late-2019, asking if I’d have an interest in doing backstage interviews, given my journalism experience. I was thrilled,” Fair said enthusiastically.

Enjoy Wrestling, a progressive organization based in Pittsburgh, offers the steel city a diverse and unique blend of sports entertainment, which was a perfect fit for Fair. As we know, the entire world was shuttered in the midst of the COVID pandemic in mid-2020 so the Enjoy debut was postponed. However, the February 2021 tapings not only saw the product’s debut in the world of pro wrestling, but also gave Meg their start in the industry that captured their attention years early on those GLOW programs.

“It was a closed set with no crowd, so it definitely was an unusual experience. I had no idea how to style myself or what my voice should sound like. Everyone was really kind and supportive, but when I go back and watch those episodes I can see how nervous and unsure of myself I am. I definitely hadn’t found my voice yet, so to speak,” they explained

During Meg’s time in college, they were exposed to the in-ring mayhem that eventually landed them inside the ring to hype the crowd for a packed venue. However, it was also a time of discovery for their own personal journey when they discovered that they were non-binary as a way to live a more authentic life.

“I had some serious, ‘I’m not like other girls!’ syndrome until high school. I think I started to have an awareness of what it meant to be nonbinary or exist outside of the gender binary when I got to college and started to meet lots of different kinds of people and read all sorts of literature. I think I came out as nonbinary in 2016, but recently, I’ve been referring to myself as trans more often than nonbinary. I’m not exactly sure why, but that’s what I feel drawn to,” they commented.

As I approach 11 months on T I am once again thanking the universe for allowing me to do alchemy on my body that is not only reducing the amount I dissociate and making me feel so good in my vessel, but is also somehow making me hotter. Amen. pic.twitter.com/PXxewBc4s3

“I think that people maybe have a misconception that everyone experiences gender variations the same way, but that’s not true. It’s a unique and personal experience. I was fairly content to gender bend in makeup and fashion for many years until I became close friends with other trans people and saw the possibilities for myself. I’ve now been on HRT for almost 11 months and it has been truly the best thing I’ve ever done for myself. I’ve never felt so present in my body as I do now,” Meg continued.

Still, Meg was a little unsure of themselves when they had the chance to open the show in front of a crowd of rowdy wrestling fans at Enjoy Wrestling’s live debut in October of 2021.

“My leg was visibly shaking, I was so scared. I think that show gave me a taste of what I needed to be doing to really engage with the crowd,” Fair said.

The diversity of professional wrestling and how it can unify those through their passion for the sport helped Meg not only showcase themselves, but find their voice so to speak on the platform that it provides. The acceptance and support of their announcing has given them a renewed sense of confidence.

“Since my voice has dropped and I feel more comfortable as me, I feel this confidence and self-assured that I didn’t have before. I feel really supported and encouraged to grow and push myself and be the best me I can be on the Enjoy team. It’s really something special. I think a huge reason why I’ve fallen in love with and stuck with professional wrestling is because of the people I’ve met through it. Interviewing EFFY in 2018 for the first time was this revelation, meeting another beautiful weirdo who knew you could really encourage exploration through the kind of theater that wrestling is. Having gotten to work with Edith Surreal and Veda Scott has been also amazing. I see this beautiful variety in expression and presentation and identity in professional wrestling,” Meg said.

Can you believe how freakin’ cute this pic of @itsvedatime and me is?! Working with them is one of my favorite things in this whole world of wrestling. :’) pic.twitter.com/h1UIb9J5ar

Aside from their work in Enjoy, Meg also announced for FEST Wrestling in Gainesville, Florida and looks to continue to add to their resume as they have truly become a part of the fabric of the progressive independent wrestling scene. Perhaps the biggest take away from their relatively new tenure in the sports entertainment world is that a combination of confidence, support, and talent allowed for one of the premiere voices on the indy circuit to emerge as Meg Fair showcases their skills.

“In the future, I’d definitely like to get into color commentary to push myself to learn something new. But truly any opportunity I get in this magical world of performance feels like a blessing, Meg concluded.