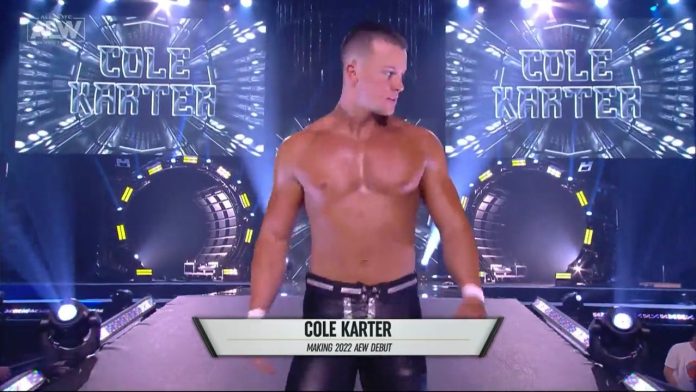 Former WWE talent Cole Karter (Troy “Two Dimes” Donovan) made an appearance on July 20th, 2022’s “Fyter Fest” episode of AEW Dynamite. Karter challenged Ricky Starks for the FTW title but failed. Starks made a reference to NXT before the match by suggesting Karter had been “sleeping with the fishes” since his previous appearance on TV.

Here are some highlights from their match:

Karter, who is dating NXT 2.0 Superstar Thea Hail, was signed by WWE as a member of the mid-March class at the WWE Performance Center, which also included Channing “Stacks” Lorenzo, NXT Women’s Tag Team Champion Roxanne Perez, Sloane Jacobs, and Arianna Grace, among others. He and Stacks were later formed into a tag team, and shortly after that, they teamed up with Tony D’Angelo to form The Family.

After reportedly failing a drug test, Karter was released from his WWE contract on June 11. However, the drug for which he tested positive was never made public. Officials explained to Karter how they might bring him back to the company in about a year, it was noted at the time. Karter confirmed the departure in a statement on June 13 and promised to return after this “bump in the road,” adding that “mistakes happen and lessons are learned.” Karter was recently written out of the company after Tony D told him to “sleep with the fishes” for attempting to challenge him for control of The Family.

Karter will not be making his company debut. He made his AEW debut at the April 7, 2021 Elevation tapings, teaming with Andrew Palace, and losing to QT Marshall and Nick Comoroto before joining with WWE.

Karter returned to AEW at the Dark tapings from Universal Studios in Orlando, Florida, on Saturday. He was up against Mike Orlando, an enhancement talent. For spoilers from those tapings, click here. The bout with Starks tonight might indicate that Karter has signed a deal with AEW, but as of this writing, it has not been confirmed.