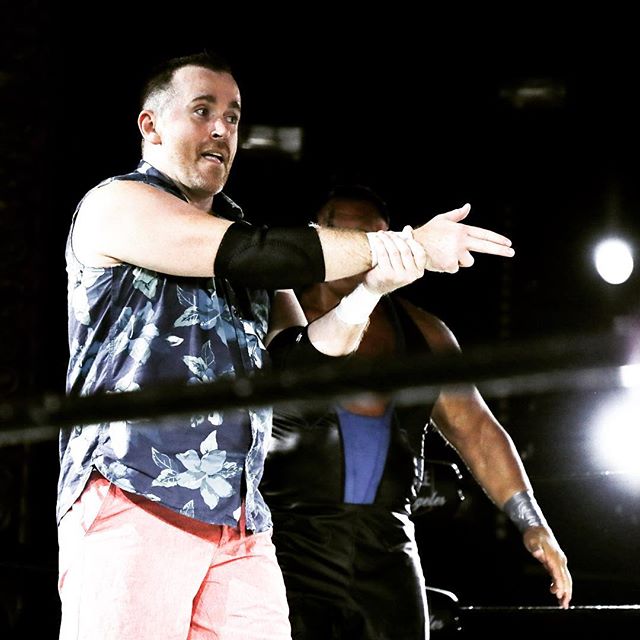 “Honestly, my favorite experiences are when I come through the curtain and the crowd reacts. Every time, I get a rush of emotion.”

Even after eighteen years in the sport of professional wrestling, veteran grappler, Dan Barry finds himself jolted with energy when he gets the chance to perform in front of a crowd. But, his fascination with the sports entertainment genre began long before he laced up his boots to zigzag across the country to compete across the independent circuit.

For as long as Detective Dan can remember, he identified with the spectacle of the squared circle, often watching matches with family members from an early age. The glamour of stars like Randy Savage introduced him to the theatrical side of industry before names like Regal, Malenko, and Nagata showcased the sport-based aspects. Being a New York native, Barry enthusiastically followed the late-90s of Extreme Championship Wrestling because of its strong presence in the north east. Eventually, when Barry wanted to pursue the sport he idolized from his youth, the wild organization that had a dynamic effect on the national perception of the industry during the boom period of the business had an impact on him again. Dan found himself at the NYWC training center to learn from a competitor that he watched for years previously, the accomplished and well-respected, Mikey Whipwreck.

But, the landscape of the industry had changed drastically since the days of the Monday Night Wars that saw ECW viewed on a national level. By the time Barry debuted in the pro ranks in 2001, the business of sports entertainment had consolidated considerably. Vince McMahon’s pro wrestling empire bought its competition, World Championship Wrestling, for pennies on the dollar after it imploded, while ECW collapsed under the pressure of the industry just a few months later. With only one option nationally at the time and its roster flooded with the remaining talent from the two prior organizations, in-ring glory was much more difficult for hopefuls that started their career in that era.

“I began when a drought started. WCW and ECW had folded, and the indies became this odd wasteland of alphabet soup promotions. Now, it has blown up into this scene that previously was viewed by a much smaller audience. Now it almost seems like a more entrepreneurial venture,” Barry commented.

Over the course of the next several years, Dan Barry logged miles traveling literally coast-to-coast wrestling on shows of all levels to hone his craft, including much of the early portion of his career before social media allowed for a wrestler to get noticed within hours after an event concluded. From the Philadelphia-based Combat Zone Wrestling to the west coast’s Pro Wrestling Gorilla, Barry’s unique blend of entertainment and athleticism thrilled audiences.While he cites winning the CZW tag titles at the ECW arena as one of his career highlights, he explained that working in Ireland earlier this year was a surreal experience for him because of his Irish heritage.

The previously mentioned CZW tag titles were won with Bill Carr, who Barry formed a team with based on his detective persona after Carr finished up a stint in WWE’s developmental system, Florida Championship Wrestling in 2011. The eccentric Carr worked well in the role and the pair known as Team Tremendous are known as an entertaining duo on the independent scene.

“I became friends with Bill before he got signed. When he was released, I talked to him about being a team. I pitched my buddy cop”vision, and he was not interested. One day, after a ton of badgering, he said yes. Since then, we have had the most fun traveling and acting goofy. Bill is the best, and I think he is one of the better “big guys” on the indies,” Dan remarked.

When he’s not inside the ring ropes, Barry maintains a successful career outside of wrestling, frequently hosts interviews for the High Spots Network, and applies his passion for entertainment on stage through comedy as well.

“I started comedy in 2011. I had always loved standup comedy, but I never thought of myself as a comedian. One day, a comedian told me to try an open mic. I fell in love with it instantly. Wrestling allows me to be the character Dan Barry, but comedy allows me to be the person,” he explained.

Even as he approaches the 20-year mark of his time in wrestling, he remains a fixture of the independent scene, and his shenanigans as the High Spots host are often featured clips on social media. Still dedicated to sports entertainment, he has aspirations to work behind-the-scenes as well.

“I would love to be an agent or a producer for a wrestling company. I think I have enough ideas in my head and helping younger talent piece their stuff together would be awesome. If not, commentary or being a manager would be fun,” Barry said.

One of the most intriguing aspects of Dan Barry’s path in sports entertainment is that not every success story has to conclude with a “Wrestlemania moment” or a bout at the Tokyo Dome. Through almost two decades of hard work and dedication, he was able to make a name for himself climbing the ranks of the business. He built a foundation for himself as a performer and expanded upon that to keep himself ahead of the curve as the independent scene evolved to what it is today. It can’t be understated how much of a success it is for a notable pro wrestler to handle the grueling task of traveling to various events while still being successful away from the ring. From early matches on dirt-stained canvases at sparsely attended cards to jam-packed events across the country in recent years, Dan Barry’s career represents the ability for a performer to find themselves and make the most of their skills in almost every aspect of the industry.