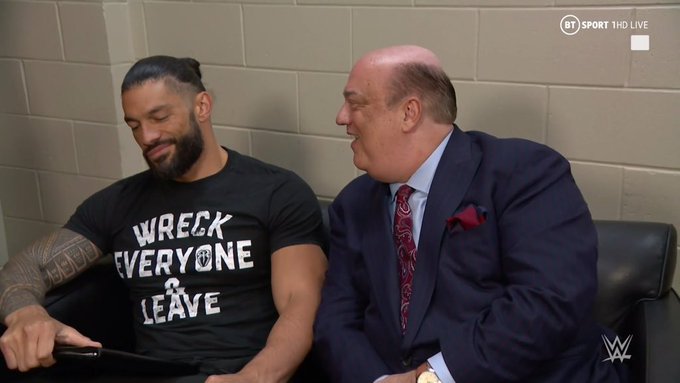 After Summer Slam concluded with a rather lackluster Universal title match between The Fiend and Braun Strowman, Roman Reigns returned and flattened both of them. Roman, the most pushed star of the past five years, was on a rightful hiatus from the company because of the health concerns associated with the corona virus. Reigns’ return was unexpected, simply because the pandemic isn’t over and Florida, where the promotion is still taping its shows at the Amway Center, is still considered a main source of COVID cases. But, Reigns is back and the final segment of yesterday’s Smackdown puts a whole new spin on not only the Payback pay-per-view this weekend, but perhaps the entire WWE landscape.

On the surface, for the organization to have another pay-per-view just a week after Summer Slam doesn’t make sense, but since Bray Wyatt beat Strowman to win the title, it’s fair to guess that he will be used as a transition champion to get the title to Roman at Payback. As talented as Bray Wyatt is, his run as The Fiend, despite the initial reaction to the character, was marred by terrible booking and cartoonish angles. The ridiculous HIAC match against Seth Rollins last year jumped the shark so far that its probably going to be known as one of the worst all-time segments in hindsight. More recently, the goofy swamp fight was so tacky that it insulted the audience’s intelligence. In short, these angles were so cringe worthy that they more or less ruined The Fiend’s status. At the same time, Braun finally won the title as a substitute for Roman at Wrestlemania, not when he was actually the most over in his career a few years ago. So, Strowman got a chance with the belt in an empty building and then the awful swamp fight outside of it so did his stint as champion really make him a bigger star? A side note, when you consider the comically awful fake eye spot that was booked for the Seth/Rey Mysterio match, you can see a pattern of booking that does more to hinder than help the talent.

That being said, “The Big Dawg” is back so just for the status he was given prior to his absence, that alone gives the product some much needed buzz. We’ve discussed previously that the stripped down look of the Performance Center exposed many of the flaws of the WWE product because there weren’t slick production techniques to camouflage the shows that often lack the substance of a quality program. All the smoke and mirrors of the state-of-the-art production team with a full arena of fans covered for some of the bland aspects of the product, which is exactly why the company started the “thunder dome” concept, which immediately improved the atmosphere of the shows.

With Roman back on television, what they do next with him is key because if he returned to the exact same place that he had when he left, what progress is made? The company has a top star that isn’t viewed by a majority of the audience as the top star, which isn’t Roman’s fault. That guy puts in the effort, but I’ve spent the first half of this article explaining that effort can be derailed if the angles aren’t presented in an effective manner. As Smackdown went off the air, Roman Reign appears to be aligned with Paul Heyman, the former head writer of Raw, who was recently shuffled out of that position in favor of Bruce Prichard. As I wrote at the time the news made headlines, Heyman was more or less the fall guy for the decline in ratings, which had much more to do with the company’s overall inability to adapt to the pandemic era than anything else. To be fair, Heyman didn’t really get a chance because several months of his tenure were during the pandemic when almost zero compelling television was produced in the empty Performance Center.

Still, I mentioned that Heyman would remain a valuable member of the roster because he still cuts the best promo in the company and quite possibly the entire industry. Say what you want about Paul Heyman the businessman or Paul Heyman the head writer, but Paul Heyman as a performer is on a level that very few others can reach, especially in the modern era. The cliff hanger of Reigns’ alliance with Heyman creates intrigue for the pay-per-view and gives fans a reason to watch, which has been a rare aspect of the product even before the pandemic. Does Roman’s agreement with the advocate of Brock Lesnar mean there will finally be a heel turn?

As I’ve written several times before, Roman Reigns has the talent to be a top star, but WWE brass put him in a terrible position with how he was presented, and the fan rejection was aimed toward management, not Reigns the athlete. I’m not sure why this wasn’t obvious, but sometimes a performer will eventually be more over as a baby face after a heel turn, and Roman’s cousin, The Rock is probably the best example of it. The bottom line is, The Rock wouldn’t have become one of the biggest stars in the history of the industry if Rocky Maivia hadn’t turned heel previously because it allowed him to evolve as a performer. Make no mistake about it, Roman was booked to be the next John Cena, which is a tough spot to put anyone, but the fan rejection toward Reigns isn’t the same dynamic that Cena had, even during the most polarizing stages of his career. The argument could be made that there was a legitimate 50/50 split on Cena, but the harsh reality is that there was much more of a negative tilted toward Roman because again, so much of the hostility was being directed toward the company so Reigns just wasn’t going to win over support.

A Reigns’ heel turn give him a fresh start from a character perspective for the first time in over five years and allows him a new role to progress as a performer. His alliance with Heyman creates a whole new series of possibilities for the direction of Smackdown, and the speculation of involvement with Retribution could add another layer as well. The scripting of Roman’s baby face promos completely miscast him, as there were lines that attempted lame comedy, but only made him look foolish. With Heyman by his side, Reigns has the best talker in the business to enhance anything that he’s booked for, which is exactly what Paul did for Lesnar. The story write itself, Roman did everything a company man should do and worked hard for the fans, but he was still rejected. Now he will do things his way, and within the process of that narrative, the Reigns persona can be presented as the Samoan monster that management tried to shoehorn into a generic baby face role. For Heyman, there’s already a logical narrative as well. Since the announcement of his departure from the writing team was public, mostly to appease the stockholders, as it allows WWE brass to claim there are changes in the company during a conference call after sluggish ratings, he could use his exit from the writing team in promos. Heyman was cast aside by the office, but he’s back with their star to show them that he can do whatever he wants regardless of their corporate agenda. This type of narrative incorporates the fact that fans on social media are aware that management makes the booking decisions for the show.

If Retribution are involved, it could create a scenario where Heyman stages a “hostile take over” of Smackdown, which would certainly add some hype around the blue brand. However, the bigger story is Roman himself and his wordsmith of a manager because the ripple effect this pairing could have might affect the WWE landscape for years. Heyman cutting the promos while an aggressive Reigns destroys the competition definitely has more potential than Roman trying to recite lame comedy lines. Again, a heel Roman Reigns now could lead to him more over as a baby face later, which is exactly what WWE has tried to accomplish for years. With Paul Heyman on the mic, it gives Roman the best chance to be presented in the best light and that could eventually translate to major business for the company.