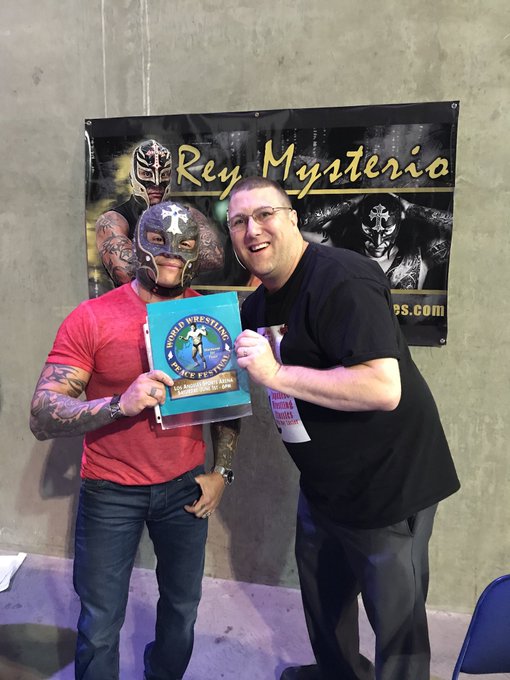 Professional wrestling, the unique genre that blends action, drama, and athleticism, has been around for decades. The spectacle of the squared circle is quite literally an international language with its storied histories in Mexico, Japan, across the United States, as well as various other places around the globe. Despite business deputes, World Wars, economic downturns, and scandals, the grappling arts has survived to continue to thrill fans over several generations within many different cultures.

But, what has kept the sports entertainment industry around so long?

The physical feats and theatrics that take place inside the ring ropes invoke an emotional reaction and thus an emotional invest from the audience as they watch these larger-than-life warriors battle it out. That emotional investment translates to any language because human natures sees us rally for our favorite stars. If it was Bruno battling Ivan, El Hijo Del Santo squaring off against Los Grinos Locos, or Inoki trying to topple the monstrous Vader, pro wrestling remains an evolving sport that became a stable of pop culture throughout the world.

As far as fandom and how it transcends any boarders or perceived language barriers, there might be no better example than Roy Lucier, a diehard historian of the industry that has become known on social media the past several years for his impressive memorabilia collection. A fan of the business for over 40 years, Roy’s home office is plastered with some of the rarest and most sought after items from the sport. While one wall is decorated with framed posters and programs from Mexico, a shelf on the opposing wall serves as a platform for a myriad of Japanese action figures. Speaking of action figures, of the hundreds of items he owns, Lucier considers his complete lucha libre set to be among the favorite part of his collection. The entire Kelian AAA line from the early-90s, considered one of the rarest wrestling figure sets of all time, is lined up in his home, each character in a protective case. The Kelian figure ring, which some were unsure even actually existed, sits on a bookcase, with a row of lucha mask set up above it.

But, despite the international flare that decorates his office, Roy’s discover of the business that has consumed much of his life was much closer to home. One afternoon in 1981, a seven-year-old Roy was channel surfacing when he found Sgt. Slaughter’s “Cobra Clutch challenge” against Pat Patterson, a violent spectacle that was a very influential moment.

“Seeing one man just beat up another and making him bleed was so amazing, and I immediately became hooked,” Roy explained.

Over the next decade throughout the rest of his youth, Lucier devoured as much pro wrestling from as many different sources as possible. However, it was the colorful, aerial, and emotional action of lucha libre that particularly stood out to him. A native of Garden Grove, California, Lucier found the concept of Mexican wrestling in the late-80s because of the influx of Hispanic culture in the region, and his subscription to Dave Meltzer’s Wrestling Observer newsletter, a publication that delivered international notes before the internet made that type of information more accessible, opened the door to lucha for him even more in 1992. While flipping through Meltzer’s printed pages, Roy read about “Lucha Libre Weekly,” a newsletter written by Steve Sims, know to readers as “Dr. Lucha.”

“I subscribed and was hooked even more, finally knowing the back story to the feuds, the rules, the title holders, and everything else. Not to mention, Steve told me where on my parents satellite dish to watch lucha. The AAA promotion started in May of 1992 so I was able to watch three promotions that year, with AAA, CMLL, and UWA. It was an amazing time to be a fan of lucha,” Roy said enthusiastically.

A lot of people's 1st exposure to Lucha Libre was the "When Worlds Collide" PPV that AAA ran in Nov. 94. Here's some handheld footage of the event that wasn't on the PPV, before and during the show at the LA Sports Arena pic.twitter.com/ADf0qCyHsS


There are key events within professional wrestling history that are considered very important for either the happenings on the card or the influence it would have afterward. Examples are famous and numerous, including The Super J Cup of 1994 that would help influence an entire generation, the AAA “When Worlds Collide” pay-per-view from that same year that introduced the US market to pure lucha libre on a main platform, Wrestlemania 17 that book-ended one of the biggest boom periods in the history of the industry, or Wrestle Kingdom 11, where Okada and Omega broke Meltzer’s star-rating system. One such of these event took place in 1996 when New Japan founder, Antoni Inoki ran “The World Peace Festival,” a truly all-star event with dozens of top athletes on the card from various promotions, in Los Angeles. Wrestlers from WCW, AAA, New Japan, CMLL, and other groups all competed on the same card. This is the same show that helped Chris Jericho and Rey Mysterio Jr. get noticed by WCW.

24 years ago today was one of the most epic and memorable shows I’ve ever attended my entire life, the World Wrestling Peace Festival. Wrestlers from multiple promotions worked in Los Angeles, also the night Eric Bischoff saw a lot of the Luchadores for the 1st time pic.twitter.com/EFhM50b1Gy


Lucier being a true diehard fan, attended the press conference for the event in January of that year. While he knew all about the legacy of Inoki from the newsletters and saw his greatness through the dedicated network of tape traders, he couldn’t pass up the chance to see the Japanese icon in person when he found out the conference was also being held in LA. After the official announcement had concluded, Roy talked to organizers, Steve Nakada, Frank Dominguez, and even Inoki himself. Only in his early-20s by this time, Roy was memorized with the New Japan boss, humbly and respectfully discussing his passion for the sport with them. His knowledge and respect made an impression on the trio, and when they wanted some local press to be organized for the upcoming festival, Nakada asked for Luicer to make an appearance on a local radio station to talk about the event.

“For doing that, Inoki gave me front row tickets to the show and also invited me to the hotel afterwards. I’m just happy those photos and memories have survived twenty four years later,” he said.

In the time since he stood next to the stoic Inoki over two decades ago, Roy continued his fandom, collecting memorabilia, attending shows, and contributing information online for his fellow fans. When he wasn’t stacking VHS tapes or DVDs of obscure footage, he managed to have a successful career outside of the realm of pro wrestling and a successful family life, as he and Mrs. Lucier have a son currently in the air force.

Lucier became such a recognizable face among wrestling circles that he did social media work for the Cauliflower Alley club, a non-profit organization that helps retired stars. Just last year, those in attendance allowed him to hear the admiration for his contributions to the sport that he dedicated himself to, simply to allow others to enjoy the industry as much as he had.

“My most memorable moment would be the 2019 CAC, when Brian Blair asked the crowd to hold the applause, and introduced everyone who worked for the CAC. Well, three tables worth of people didn’t listen to Brian, and when I was announced, they all stood up and cheered for me. Considering I’ve never wrestled, the looks alone on Jerry Lawler’s face on who this person was and why he was getting this loud applause is something I’ll never forget,” Roy commented.

Just FREED a 2002 Charapro Mil Mascaras figure! This is a work of beauty!


However, it was in March of this year that Roy was able to realize his ultimate dream as a lucha fan with a trip to Mexico to watch authentic lucha libre live. His connections through all of his time around the wrestling circuit set up for a memorable experience, as he attended an event at the world famous Arena Mexico, watched some independent shows, and organized a dinner with Juventud Guerrera, who he met at shows years earlier. Juvi, knowing what a treat it was for Roy to be in Mexico, arranged for him to meet another staple of the golden era of AAA, Heavy Metal.

“Guerrera’s wife gave me the phone number to Heavy Metal, so my wife and I had dinner with Metal and his wife and kids the next night. I got him to sign his figures, gave him an extra one, and he signed some programs. After that we went to Super Astros Torta shop and met Mil Mascaras and Canek. Overall we had an amazing time. I can’t wait to go back. There are some amazing people I’ve met over the decades, and continuing friendships with them and talking wrestling has helped me to continue to be a fan 40 years later,” Roy said.

On 6/25/93, Roddy Piper made his only appearance for AAA, as a fan in the front row, supporting his longtime friend, Art "Love Machine" Barr. I'm assuming Piper was in the area filming. While not on video, after the match, Machine unmasked Panther and gave the mask to Piper pic.twitter.com/87MpnYgiy7


When he isn’t posting rare content on Twitter, Roy makes it a project to upload as much classic and international footage as possible on Youtube. However, outside of the fact that he has a successful career, none of his online content is monetized because he simply wants to share the sport with others, especially for them to have to chance to see footage that even in the modern age is difficult to find. Perhaps the most striking aspect of Roy’s 40 years as a fan is that the action of professional wrestling can bring people together from every generation and background so while the mayhem inside the squared circle might be for pure entertainment, the friendships that are made from it are certainly very authentic.