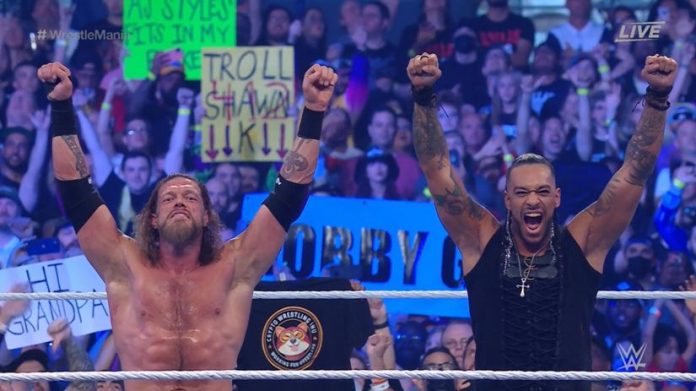 In the past few years, it was a topic of discussion, and something I’ve mentioned in this column frequently, the 50/50 booking philosophy hindered the star power across the board in the WWE. For whatever reason, prehaps because the company strategy is to market the brand ahead of any individual talent, the vast majority of the roster is kept at relatively the same level, as most of them will exchange wins rather then certain talents that are pushed ahead of the pack.

It might be because of the social media age, but somehow the term “mid-carder” is seen as a total negative, as if a talent is either being misused or is subpar if they aren’t in the main event scene. Granted, the topic of 50/50 booking has undoubtedly led to some key talent being underutilized, but the bigger point being that not every wrestler has to main event Wrestlemania to have a successful career. Al Snow, who toiled in obscurity for a portion of his career, despite being a very talented in-ring performer, became a legitimate star in the wrestling business with a mannequin head as the main part of his act. Granted, Al wasn’t going to main event Wrestlemania with that gimmick, but he had more than a decade under WWE contract and has kept a job in the profession in some form or fashion for over thirty years. Again, Al Snow wasn’t going to win the world championship, but he was a perfect mid-card wrestler that brought entertainment to the show. The term mid-carder isn’t meant as a knock, but rather that he played the role so well for that portion of the event. Keep in mind, one of the reasons that the Attitude Era had such depth on the roster was because guys knew how to be stars without just a main event push that already puts the spotlight on them. The same could be said for someone like D’lo Brown in that era or R-Truth today. There’s a reason that Ron Killings has had a job with the WWE for such an extended time, because he can do anything that’s needed on the show. Killings even proved he had the ability to work as a heel near the top of the card during a brief feud with John Cena several years ago.

In many ways, the 50/50 booking where talent trade wins in an attempt to get everyone over actually prevents how far any of them can get over with the audience.

Proof of that is the fact that outside of Roman Reigns, Brock Lesnar, or Ronda Rousey, more or less the entire roster is subjected to the 50/50 concept. Ironically, that’s why Roman, Brock, and Ronda are the biggest stars in the company.

Remember, the biggest draws in the history of sports entertainment are the baby faces that were rallied by the crowd, and the villains that were hated by the audience. The 50/50 pattern is the middle of the road, which by nature doesn’t draw by comparison.

There was no better example of this 50/50 booking in recent years than the Judgment Day attack against Edge just two weeks ago on Raw. Edge, who was still over, but rather lukewarm recently in his baby face role, turned heel just two months ago after a solid match against AJ Styles at Wrestlemania. Proof of Edge’s almost floundering status was that the bout with AJ was more or less thrown together because the writing team didn’t seem to have anything better for either of them to do for the biggest show on the calendar. At first, the heel turn seemed to serve a dual purpose since it would refresh Edge’s character, and the addition of Damien Priest would give him something meaningful to do instead of being just another wrestler on the roster. Rhea Ripley joined them, and considering that she was more or less wasting the prime of her career in a comedy tag team with Nikki Ash, most fans thought that the acquisition would give her a better chance to truly showcase her stellar in-ring ability.

Following the usually WWE playbook and the recycled trope, Edge blamed the fans for his heel turn. Usually, a wrestler that makes it to the Hall of Fame is always over as a baby face for their legendary status, but Edge went with a full heel turn to trade in that cache for an angle that could truly add a fresh chapter to his already accomplished career. However, that was neutralized just two months after the angle started so there wasn’t really a chance for the stable to have a run or just anyone over with the new gimmick. Based on the attack, it looks like Finn Balor is the new leader, but at this point, the Judgment Day faction didn’t have a long enough run that a takeover of the group means all that much in the grand scheme of things. Mostly, Balor just seems like a replacement for Edge. If nothing else, particularly with the original additions of Priest and Ripley, there looked to be some purpose for the storyline, as it gave previously overlooked wrestlers a chance to proclaim their importance to an ungrateful public. Edge using the cult leader role could use his status as a WWE legend to put the spotlight on the other prospects. Finn Balor is one of the best talents of his generation, but aside from attacking Edge, what’s his role or motivation for the storyline?

Mostly importantly, where does any of this leave Edge?

Sure, he might be cast as a baby face going forward, but is he really over as a baby face to the audience? Just two months ago, he turned heel and blamed the fans for everything. He was kicked out of the heel group by the other heels, it’s not like he did anything to turn baby face in the process. He didn’t stand up for one of the other baby faces or anything that would give the fans a reason to cheer him again. If Edge swears revenge on the Judgment Day faction, will the crowd really get behind that? He was a dastardly heel that got a dose of his own medicine so in terms of the storyline, Edge got what he deserved. The bottom line is, the turn against Edge has put his character in a position where he can’t be an over baby face because he just blamed the audience for his recently heel turn, and he can be an effective villain because he was just kicked out of the heel faction. So, Edge, one of the most popular performers in the company at one point in his career, is now floundering in the 50/50 booking of the company.

Supposedly, there were rumors that Edge opted to step away from the group because the writing team wants to include sci-fi aspects into the faction, and if that’s true then Edge might’ve made the right decision because we all saw what the writing team did to Bray Wyatt’s career.